A
Now i am one of the old school members on here I grew up with a sinclar spectrum to which i wrote my first progamming code when i was 8 years old, then moved on to the 'rad' atari st and moved on to the amiga. The amiga is where most of my childhood/teen memories lie. It could do anything and the games were awesome. I think what eventually killed off the amiga was when pc's advanced with pentiums and suddenly this new internet thing came out. After that the amiga became obsolete and eventually fell into the past. I would love it if it made a big return with new programming an up to date workbench and basically do everything a pc can do if not better. I know this would probably never happen, but the other week i took a trip over to my mums house and dug my old 1200 out the loft, blew off the dust and turned it on. My god it was like a time machine, everything i had done on it had been stored and left in stasis for the last 15 years, all my pictures i made in deluxe paint, and all my music i made in pro tracker, along with elite 2 and all the other old games i installed on there. it was very nostagic and a bit upsetting because the last time i turned it on my dad was still alive, and i remember when he used to rub it in that his amiga was faster than mine and had one of those cd rom things attached to it. my god how far we have come.

What killed of Commodore and the Amiga was that ****ing idiot Mehdi Ali who had as much business sense as your average house brick.
Even without the benefit of Mehdi Ali I doubt that Commodore or the Amiga would still be with us today as they would never have survived Sony entry into the hardware market.

If the Amiga was to make a comeback it would have to be small and cheap some thing like that usb computer Braden working on, now if that can run the Amiga OS.

Yep.. Amiga was killed by bad leadership who thought they could earn money on ageing hardware without ever having to spend money to improve it. Milk the most out of the company....

The Moderator who shall not be Blamed....

It's a tragedy that the Amiga no longer exists, I know the OS is sort of still going. But, what machines the Miggy's were, for me nothing ever came close. 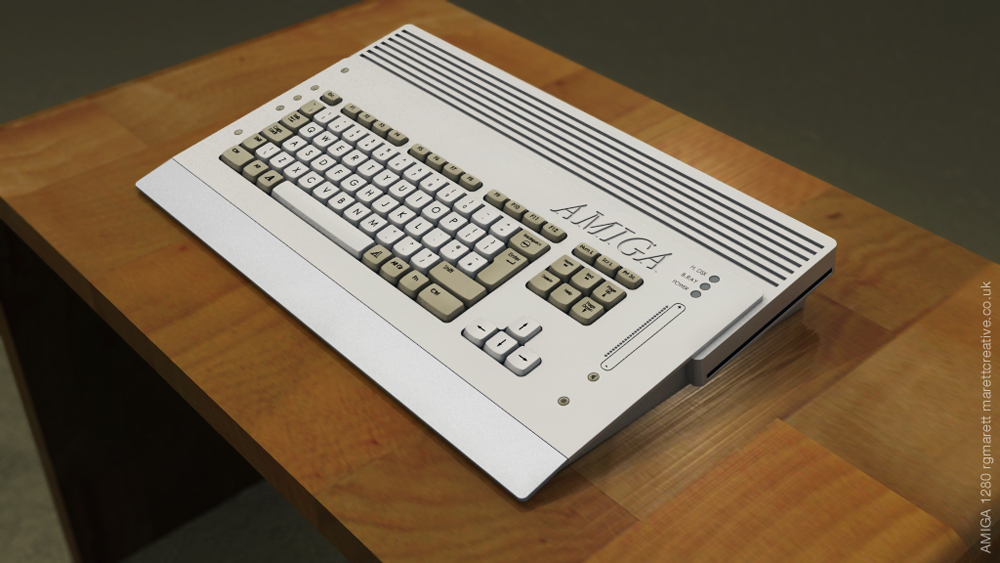 ...wish they were true

@rgmarett:
everybody can see that that's no Amiga... cause the ctrl key is on the wrong location...

And the missing numeric pad.

Lovely CGI pic makes you wish that they were still around.


Spacegamer said:
makes you wish that they were still around.
Click to expand...

Um....mine are! Been working on em recently.

New copper heatsinks on the CV-PPC

The 060 Cyberstorm MkIII now fully working and overclocked! Note the Indivision AGA board on the left of the picture

Just making sure it works! That green thing on the back of the 4000 is a CF card reader.

C'mon folks get your miggys out and take some pictures!
Last edited: Sep 18, 2011

Well I still have my old ones.

First up the A500 got this few years ago at a boot fair, guy said he was selling it for a friend who wanted £15.00 for it but he sell it for a tenner.
Couldn’t give him the tenner fast enough also came with a 1084 monitor and about 80 disks, got it home looked in the trap door, half meg card in there RESULT.

And the legendary Bvision graphic card.

zmurf said:
@rgmarett:
everybody can see that that's no Amiga... cause the ctrl key is on the wrong location...
Click to expand...

Been thinking about getting one of those card drive for the beast as it hard drive on it last legs.

Mind you will need a heat sink too

You should think about a CF drive. You already know how fast a miggy can boot, but you should see how quick it is with one of these, plus it is totally silent. I use them exclusively in my 2 A1200s. Many people recommend Kingston 4 GIG cards, although I have used Transcend cards too. Mind you, I still keep a hard drive in my 4000 because CF cards have been known to develop read errors if they are accessed a lot. Should be fine though for a machine only seeing casual use.

You can get one already prepped and ready for use here http://amigakit.leamancomputing.com/catalog/product_info.php?cPath=24_78&products_id=883

Or, you could go hunting on Flea Bay. I picked up cheap ones (with adaptors) from there.

Have you thought about using Retr0bright on your miggys Spacegamer? This handy mixture can restore your miggy's plastics to bright white condition again. Also works on grey and other colours too eg C64 breadbins. Here is a link http://retr0bright.wikispaces.com/

Nice zmurf! And great to see a C64 still getting plenty of use

The ultimate A1200 mod, a CD drive in the case.
Nice one zmurf thought about trying it myself, but I think I will just stick with the squirrel interface and external CD drive.


Geraldine said:
You can get one already prepped and ready for use here http://amigakit.leamancomputing.com/catalog/product_info.php?cPath=24_78&products_id=883

Or, you could go hunting on Flea Bay. I picked up cheap ones (with adaptors) from there.
Click to expand...

The CF drive from AmigaKit is the one I have been thinking about getting, think the one on Flea-Bay are just over priced.


Geraldine said:
Have you thought about using Retr0bright on your miggys Spacegamer? This handy mixture can restore your miggy's plastics to bright white condition again. Also works on grey and other colours too eg C64 breadbins. Here is a link http://retr0bright.wikispaces.com/
Click to expand...

Remember reading about Retr0bright, nice to see the managed to perfect it, although I can’t say that I am too bothered by the plastic going tea colored.

Just picked up this little beauty on Amibay

Zool a good game
As for the A600 well I think this quote sum it up.

The Managing Director of Commodore UK, David Pleasance, described the A600 as a "complete and utter screw-up"
Click to expand...

Come to think about it an A600 might make a good replacement for the.

The Moderator who shall not be Blamed....

Never like the a600 at all, even though I've still got one in my collection.