Welcome Commanders and Frontier. I am Arsen Cross. In the below video I cover in extensive detail the mechanics surrounding Fleet Carriers and what I feel needs to be changed to make their potential become fully realized. Most notable within the presentation is my thoughts on the permissions and communication needs of Fleet Carriers. Everything said in the video can be found in the script linked in the reference materials below if you need a text version.


This Presentations Script
Full Playlist of All Test Footage & Feedback
My Original Coalitions Proposal
Shovsoft's VR footage for the SRV turret
Hydelide Gaming's Carrier Feedback
D2EA's Coverage of Wing Dividend Exploits
DSSA Information
Ideal Carrier Stats & Changes Summarized
Introduction
The text below is the scripted version of the above video. You may choose to watch or read and receive the same information. The video contains footage of the most interesting tests performed. Further videos can be found in this playlist containing over 50 videos focused on Fleet Carrier interaction.

Fleet Carriers have enormous potential and I am very excited about their release. I believe that once available those who do wish to manage them will create gameplay opportunities beyond what was expected by those who find the management aspects of Fleet Carriers unappealing.

Fleet Carriers in Elite can be viewed as a Swiss Army Toolbox with its cargo storage capabilities, bonds and simplicity of travel making it a multi-tool and the ability to dock and store your fleet of ships and modules making it a toolbox. 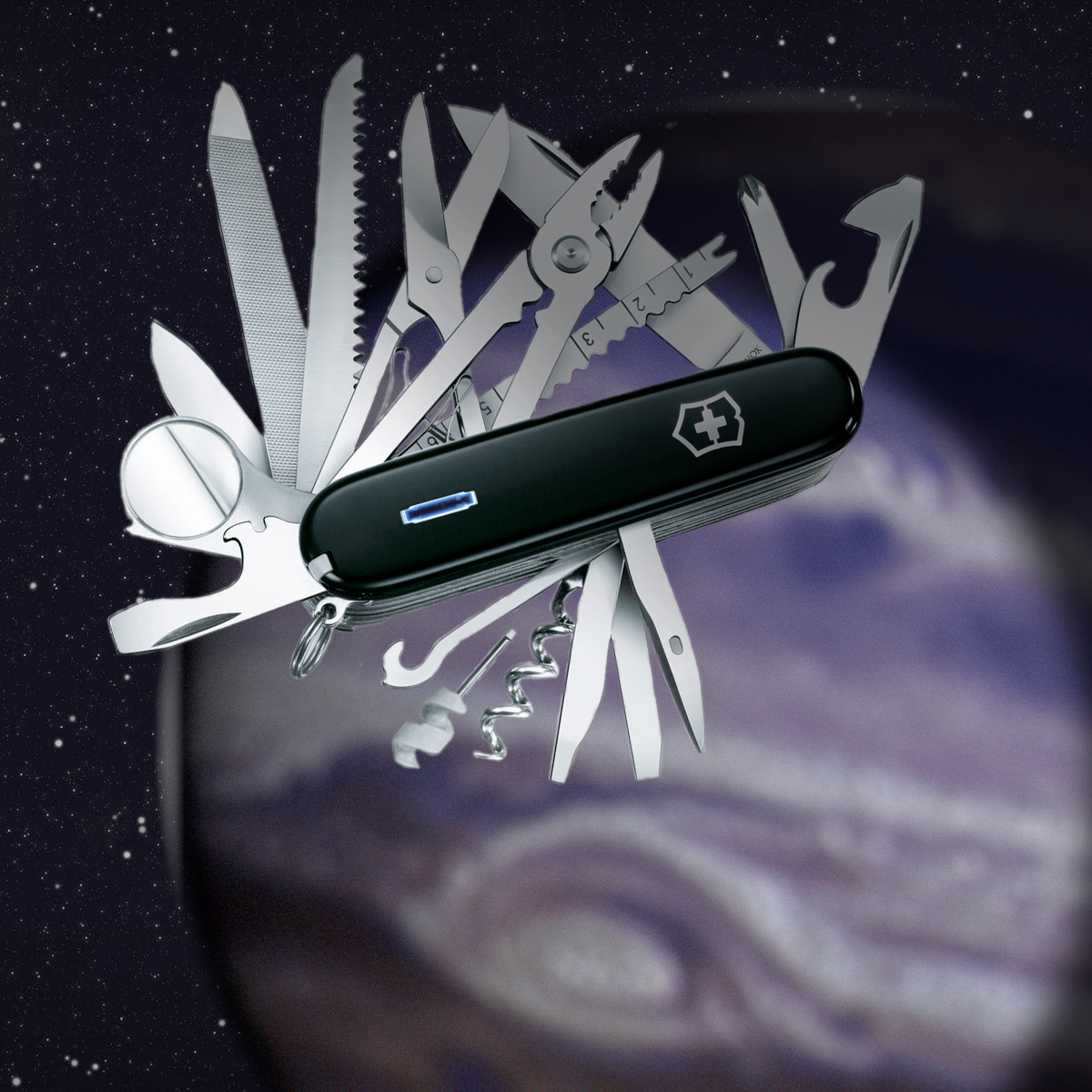 A dockable “Swiss Army Toolbox”, image edit by Chen​
Crime & Punishment
The Current State of Crime & Punishment
Changes needed with Crime & Punishment
Fleet Carrier Permissions
The Current State of Permissions
Permissions Changes Needed
Fleet Carrier Travel
The travel experience with carriers involves quite a bit of waiting with the current 15 minute timer. My judgements of this experience were based on how useful carriers became to me with my primary ship being the main comparison point. In my normal game play I fly a Python with a 23 light year jump range and often need to travel between 10-15 jumps for most of my normal changes between activities.


In general I found that the Fleet Carriers having their own galaxy map for plotting jumps was frustrating and leaving me repeatedly exiting the normal galaxy map to go to the “correct” map to schedule my jumps.

Jump Cost & Fuel Consumption
Refueling the Fleet Carrier
Desired Travel Changes
Upkeep & Services
My experience and thoughts regarding Upkeep
Needed changes to Carrier Upkeep
Needed Quality of Life Improvements
System Claims Proposal
I caught wind of the idea of Fleet Carriers claiming ownership of a system from Hydlide’s Carrier Feedback video and thought it would be great to see a similar system under the premise of “claims” instead of ownership.

Implementation of a systems claim with simple rules like this would create an entire set of gameplay that is mode agnostic, both social and not, and provides a manner in which carrier owners can profit from their carrier remaining stationary. It also provides a level of symbolic control of an area without directly impacting the gameplay of others within the system or changing the mechanics of the star system.

Rules for System Claims
Communication & Fleet Carriers
I feel that Fleet Carriers are an opportunity to provide players with a means in which to communicate objectives with each other more effectively and that this was under-estimated during development.

The game currently provides news articles at stations for Frontier to provide players with information and a Squadron Statements system for players to share information with members of their squadron and the public. I believe that both of these existing systems should be harnessed and used with Fleet Carriers. 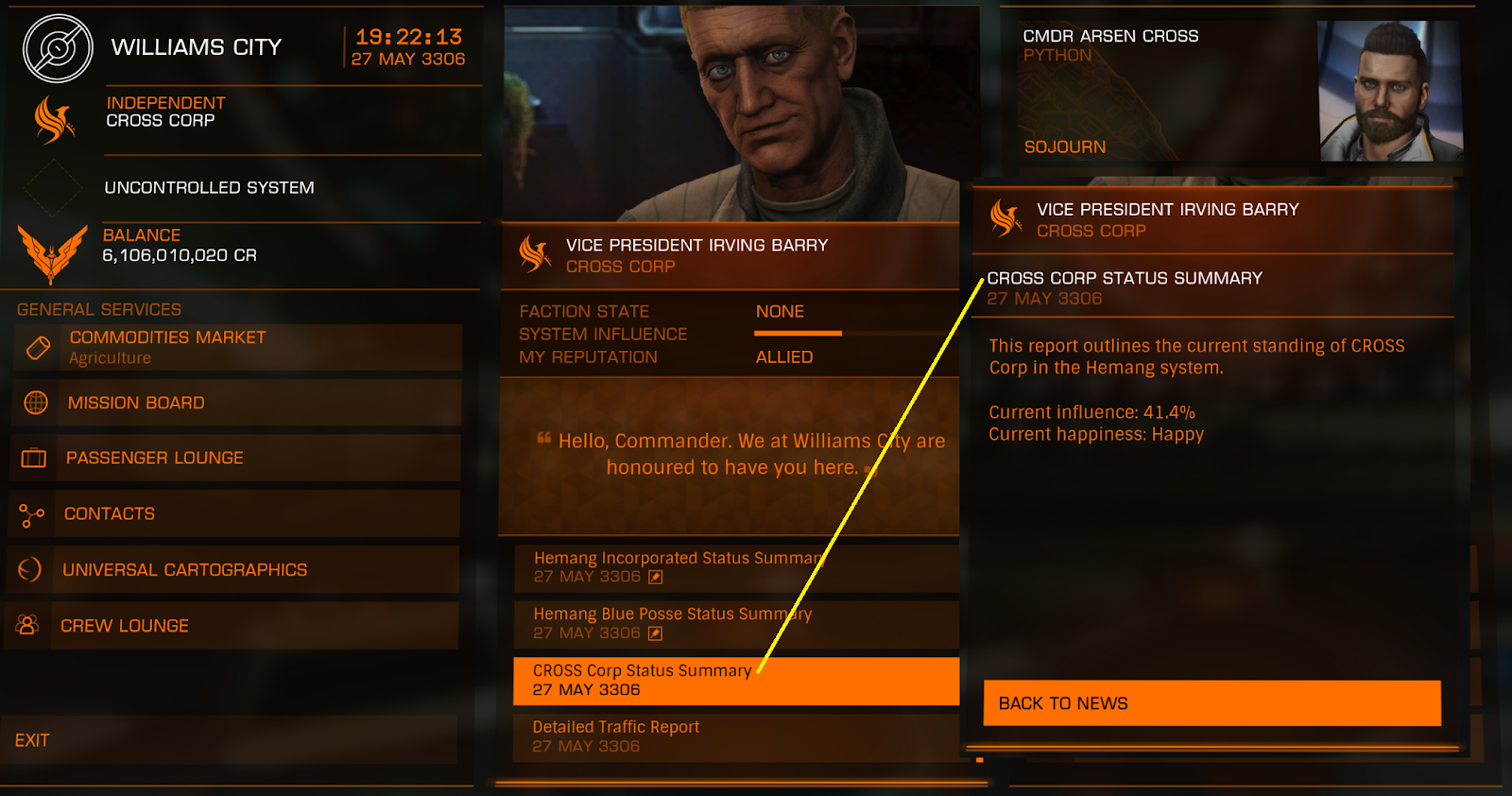 An example of the station news panel. 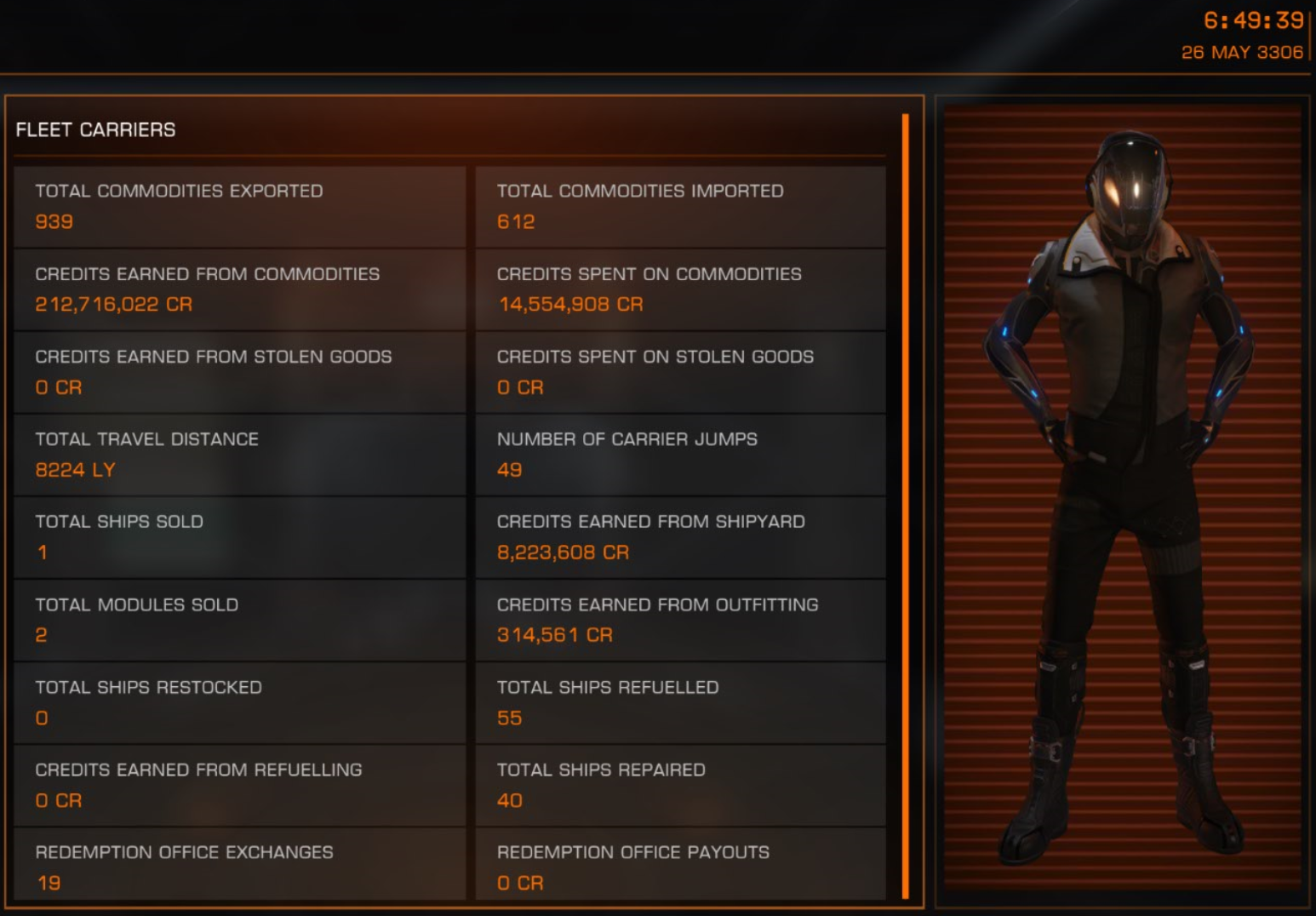 I feel that Fleet Carriers effectively shrink the game for those that have them and I believe this is a good thing that will result in a significantly higher level of engagement with the games existing content. Such as enabling me to spend significantly less time traveling and more time in my Scarab and Ship doing what I want to do.

I also find that being able to move my fleet of ships wherever I want dramatically simplifies the process of engineering and outfitting my 30+ starships. A task I have been avoiding because nearly all of those ships are not fun to fly when fit with the travel equipment my particular play style demands.

Group Usage
I have a second account that I plan to purchase and manage a second carrier with that will be treated as my squadrons flagship and enabling me to utilize mine entirely for personal use while still supporting the group as I felt the travel benefits of a carrier were dramatic enough to warrant this.

This desire to operate a Fleet Carrier for use by a group of players had me wanting the ability to delegate command of my carrier to trusted individuals so operations I am donating my carrier to can continue without my presence. Currently the only way to accomplish this is to share your account credentials which is not only risky but against the Frontier Terms of Service.

Fleet Carrier services should be approached with the mindset of being focused on providing multiplayer functionality and quality of life improvements beyond the base functionality of allowing the owner to store and maintain their assets as can be performed at any other station.

A stock Fleet Carrier should include:
My Fleet Carrier Testing Experience
I found myself frustrated with a lack of people to test due to an overwhelmingly negative outlook on Fleet Carriers which I feel was almost entirely driven by their initial costs and travel costs. While improved in Beta 2, most players still felt these costs were far too high and chose to shun the carriers as a result. This issue with finding people to test with and scheduling tests slowed down testing dramatically.

Things I wasn’t able to test properly in beta 2
Jumping Carriers & Waiting
I spent 12.5 hours waiting for my carrier to jump in Beta 2 due to the 15 minute charge timer. If this timer had been 5 minutes that time would have only been 4.08 hours (giving me back 8.17 hours). I do feel a 5 minute timer is necessary for carriers open to people other than the owner to ensure they have an option to disembark prior to the jump if they are online and this huge amount of time waiting was based on nearly 40 hours of play during each week of beta 2.

Due to my normal rate of travel being one jump a minute in a normal ship I wound up seeing the carriers 15 minute charge and comparing it to 15 jumps. If I couldn’t get somewhere in my ship in 15 jumps, I’d just use the carrier. In reality though my threshold was closer to 8-10 jumps and I’d spend the extra few minutes I’d be waiting doing other stuff.

Carrier Refueling
I generally found this to be a pain. Mining the minerals, even if yield is increased was something I am simply not interested in as a bubble dweller. I’ll buy fuel before I mine it if I can. Even with my proposed 10x tritium efficiency it would take me an hour to mine enough fuel for a 500 light year jump by myself.

With a 10x efficiency though a full tank would enable up to 10,000 light years of travel making the ~40 million credits it takes to fuel a carrier with purchased fuel stretch quite a bit further. This would also equate to a Fleet Carrier being able to stockpile fuel in Colonia or the Bubble upon purchase and continuously jump to wherever it is going to be stationed without stopping should they want to. That also means they can choose to bring plenty of other cargo as they aren’t stuck using the entire bay for fuel.

Final Conclusion
In spite of what seems like a slew of negative feedback I was left with the impression that Elite is very much heading in a direction towards fulfilling its design goals. Implementation and thought on features are being very carefully thought out and a design simplicity geared towards adding tools to a sandbox is very much being embraced.

I can only hope that this is a sign that the Next Era will indeed bring base building and more complex asset management. If this is the case, player content creation is going to change the face of Elite for the better. You only have to take a moment to stop and think about the fact that players building things in cool places they find means that those assets create opportunities for gameplay. If Frontier chooses this path the implementation indicates that those un-interested in the management aspects will be able to interact with what players build as well as contribute to the goals of others. Using the concept of system claims alongside this potential future content would create amazing opportunities for mode-agnostic player interaction involving territory and politics.

I hope Fleet Carriers and player owned capitals receive iteration with enhanced mechanics in the Next Era and includes the introduction of new capital class ships of various entry level prices. With players limited to one capital ship and having multiple choices on offer that range from "Jump Sleds" featuring only the ability to jump a wing of 4 docked on settlement style landing pads and accept tritium to the mobile stations that are Fleet Carriers. You can even introduce manufacturing specific capitals as well and allow players to process the goods they obtain into things we can use.

Frontiers implementation of Fleet Carriers has truly introduced the ultimate Swiss Army Toolbox. Please make these changes so they fulfill their potential. I look forward to the Next Era and extend my thanks for giving me the nomadic homestead I've always wished for.
Last edited: Jun 2, 2020

reserved for bug report links and post is now edited to include a complete text version.