I hope this helps for now
Click to expand...

Don't know if it's been suggested before, but could we have next to the name of a system or station a little button that copies it to the clipboard so it can easily be pasted into the galaxy map?

Titus Balls said:
Don't know if it's been suggested before, but could we have next to the name of a system or station a little button that copies it to the clipboard so it can easily be pasted into the galaxy map?
Click to expand...

can you specify this in detail...
because there are such buttons already in certain places

It appears that bodies.jsonl is not just no longer updated (for the reasons mentioned earlier), but also no longer available. Just the bodies_recently. Could I trouble you to upload the last built one somewhere please? Although to be frank, I'm only looking for the ELWs and AWs from there, and will be filtering those out and discarding the rest anyway, so a smaller dump containing just those would be perfectly fine - for me. I imagine others will find these useful too, either the whole body data or a filtered one. So, even if it's not an automatic update, could you upload a manual one please?
Last edited: Dec 5, 2017

Yes, a one-off generation of a current bodies.jsonl would be very much appreciated!

Adding to the list of "I miss bodies.jsonl". I, too, would like a one-off generation - or some other solution.

Would it be possible to get it semi-regularly - say once a month, or even one a quarter? And with, say, a monthly version of Recent Bodies ? I (and I expect many others who use it for exploration purposes) tend not to update it every 2 days, more like every couple of months...

Yes, this is pretty much what I was worried about and so I attempted to normalize the numbers a little. I used the two independent variables and multiplied the percentages after removing outliers to try to establish some figure which would be useful.
I should specify that the ELWs shown here were the only ones with coordinates available (until EDDB returns my call) and represent only about 15% of ELWs in the database. Therefore, it is very likely the data is skewed, simply because only the CMDRs who took the time to submit data with coordinates likely know very well how to find them, and I believe Allitnil submitted at least a few hundred so it should definitely be met with a grain of salt.

As far as "small numbers" this was and is a concern, but I should specify I took ALL systems into account (15,332,441 systems at the time of download.) Which is EVERY system with coordinates added to EDSM. Unfortunately, if I were to cutoff intervals with say, no less than 50k systems, we would only have data extending to +/- 1,200 Ly. Unfortunately, until I have access to the data I am at a bit of a standstill.

In the meantime, I threw this together, which is simply the number of discovered ELWs in interval/total systems in interval. 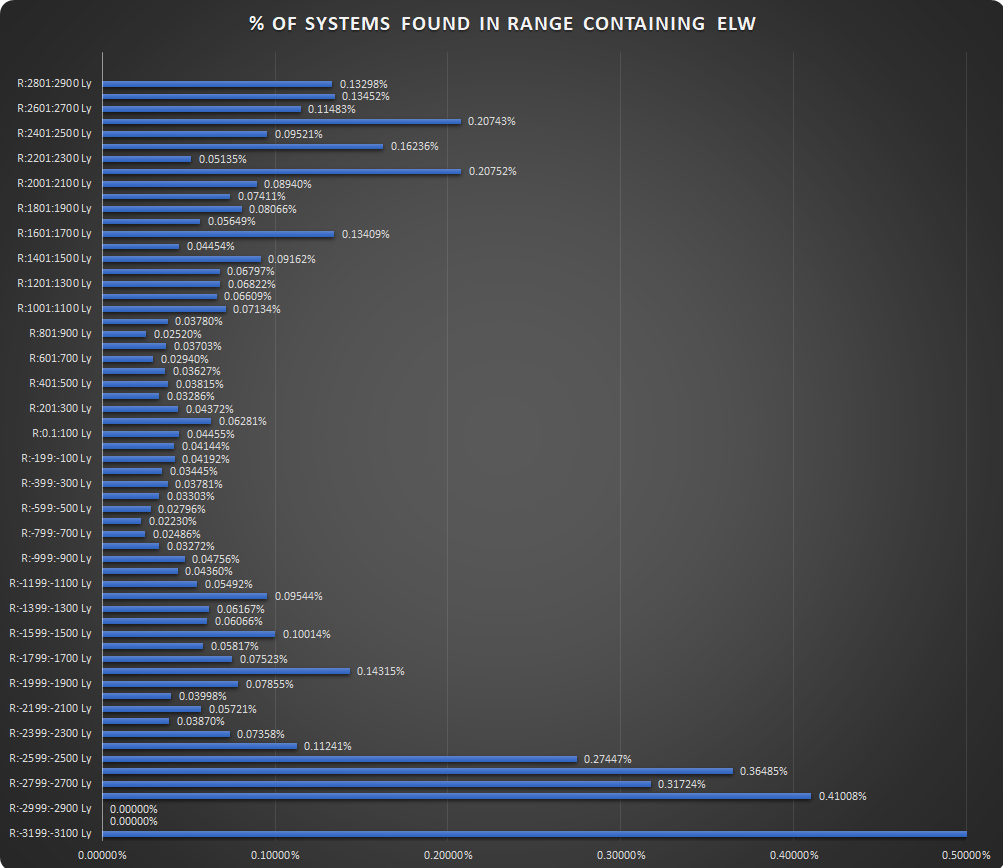 It looks pretty similar to the last graph but maybe useful while we wait.

S
The search for bodies will now be only in the range of 100 ly? [blah] It will be possible in the future to seek across the galaxy?

will i ever be able to sort the search results by more then one column?

it kinda sucks when i am searching for something that has eg. the highest of criteria 1, but is also the closest to my reference system (criteria 2)

i know, sorting tables by two criteria seems to be the most obvious thing for users, but the hardest thing for coders?
or else i would not even have to ask for something so fundamental everywhere i am confronted (looking at you UI FDEV)

Bunkerkind Anni said:
will i ever be able to sort the search results by more then one column?
Click to expand...

Have you tried <SHIFT> + left mouse button click on the head-column for the second criteria? Seems to work for me.

gazelle said:
Have you tried <SHIFT> + left mouse button click on the head-column for the second criteria? Seems to work for me.
Click to expand...

ok, then can we ever get tooltips telling me that

gazelle said:
Have you tried <SHIFT> + left mouse button click on the head-column for the second criteria? Seems to work for me.
Click to expand...

What? That's not working on EDDB. Where did you get this idea?

ok, i have to rephrase that a bit.

would be nice to get a column with "estimated jumps"
since sorting by multiple criterias to work, requires data with identical numbers to work.
only if criteria 1 is identical, there is a chance for sorting criteria 2

so breaking down "distance" to "jumps" would solve this.

OR,
simplier: let me put in a search radius, reducing the result from 20k entries to 50 or so

Bunkerkind Anni said:
OR,
simplier: let me put in a search radius, reducing the result from 20k entries to 50 or so
Click to expand...

I implemented just that...

themroc said:
I implemented just that...
Click to expand...

thanks, but where?
cand find it

Bunkerkind Anni said:
thanks, but where?
cand find it
Click to expand...

Bottom right on the body search.

Well, what about the search for bodies. The search radius will always remain limited to 100 ly?

ah, there.
what about systems and stations search?
im more often in search for systems in a certain state and population with a certain goverment, then looking for bodies with a certain composition
even more when the new engineer update comes
You must log in or register to reply here.
Share:
Facebook Twitter Reddit WhatsApp Email Share Link
Top Bottom