When creating the DW2 route, I felt it was important that it was made up of several stages, with each stage appealing to different parts of this massive 14,000 player fleet.
Laying the foundations for Galactic Core scientific studies, revisiting mysteries of the past, and trailblazing the new age of discovery

Stage One was structured to pay homage to some of the game lore that has unfolded since DW1. So, part of the route took us through the Conflux (famed from the book, Elite: Premonition, and associated with the mysterious abandoned settlements we visited). In addition, the Colonia Connection highway with its numerous stations and planetary ports proved invaluable as they acted as convenient re-spawn points for players who had mishaps, or were destroyed in hostile encounters. This massively lessened the impact of
those setbacks, and on the whole, we feel that many of the aforementioned newer players appreciated the ‘safety net’ that this early stage offered.

An optional excursion to Colonia was always going to be part of DW2, since Colonia’s ‘birth’ was directly linked to DW1 via Jacques’ failed attempt to hyperjump the starport to Beagle Point and rendezvous with the DW1 fleet in April 3302 (he mis-jumped, and ended up in the Eol Prua nebula, and the rest is history!).

Stage Two was primarily about the Community Goal in the galactic core, and it was amazing to see how many players journeyed there and took part in it. It was the first time such a CG had been held so far from the comforts of human civilization, and despite a few technical issues and having to compromise, readjust, and rethink some of the logistics, on the whole it was a fantastic experience seeing how teamwork and the social aspects of the expedition came together via the CG, with its associated fleet roles that were envisioned way back during the first draft proposal of October 2017. Tier 10 was reached within 6 days, with the starport facilities, Megaship, and Science Relay being
the rewards and part of DW2's lasting legacy.

Stage Three was a resounding success. We journeyed through the Aphelion regions, a part of the galaxy that is often travelled, but very little information (in the form of POIs) is known about. DW2’s goal here was to change that and map the region, discovering many interesting POIs that will soon be marked on EDSM by the Galactic Mapping Team, and these locations will no doubt be used by future expeditions as waypoints and recommended places to visit for travellers passing through these remote regions on expeditions long after DW2.

A journey across the Abyss... and beyond

Stage Four took us out of the Aphelion, across the Abyss, and out to the far galactic rim where Beagle Point is situated. It was heartening to see that the Abyss still offered some challenges to fleet members, and that navigation and forward planning haven’t yet been completely made obsolete by the advancements in auto-route plotting and long-range jump drives. Those who made it all the way across and out to the Ceeckia sector joined an exclusive club - visiting one of the most iconic star systems in the Galaxy, Beagle Point, out on the far outer rim over 65,000 LYs from home.

We visited some of the most iconic locations, diced with death on one or two high-g worlds, we went to the core and looked out across its vastness from the magnificent Goliath’s Rest, and we passed through some of the most colourful and varied nebula in the known galaxy. We crossed vast sectors of space and brought back masses of Codex data and countess POIs for the mapping project. Thousands upon thousands of screenshots were taken, thousands of videos were made, hundreds of blogs were written.

All in all, the DW2 route had to incorporate as many aspects of the gameworld as possible, both new and old, as to set it aside and be something a little different from the route I created for DW1. I hope players got a real sense of adventure and a nice variety of locations to visit from this trek across the galaxy, and I hope fleet members have lots of memories from their journey of discovery along the way.

Waypoint 1 to 2 - Pallaeni to Omega Nebula
Waypoint 2 to 3 - Omega Nebula to Conflux Abandoned Settlements
Waypoint 3 to 4 - Conflux Abandoned Settlements to Llyn Tegid Nebula
Waypoint 4 to 5 - Llyn Tegid Nebula to Polo Harbour
Waypoint 5 to 6 - Polo Harbour to The Dryau Awesomes
Waypoint 6 to 7 - The Dryau Awesomes to Armstrong Landing, Sagittarius A*
Waypoint 7 to 8 - Armstrong Landing to Goliath's Rest
Waypoint 8 to 9 - Goliath's Rest to Cerulean Tranquility
Waypoint 9 to 10 - Cerulean Tranquility to The Morphenniel Nebula
Waypoint 10 to 11 - The Morphenniel Nebula to Luna's Shadow
Waypoint 11 to 12 - Luna's Shadow to Beagle Point


Stage 1: Laying the foundations for Galactic Core scientific studies, revisiting mysteries of the past, and trailblazing the new age of discovery.

Stage 2: Building the Galactic Core Starport and discovering secrets at the heart of the galaxy.

Stage 4: A journey across the Abyss... and beyond.


The following maps have been created as a guide home from the outer galactic rim regions. The POIs marked on the maps are (in the main) within regions or sectors that are in relative proximity to where the Voyager Trail is speculated to pass through. The actual 'best' guess Voyager Trail is listed in the POI description here:

Commanders currently in the vicinity of Beagle Point who want to use this guide home will first need to travel through the Solitude Void and out to the Silentium Region to begin the Voyager Trail. The journey from Beagle Point to Voyager's Reach itself is no easy task, it is a journey of approximately 22,000 Light Years between the two, and through some of the most remote sectors of the galaxy. Therefore this guide home should only be undertaken by those who are in no rush to return to civilisation and who plan to explore some of the more distant regions of the galaxy before returning home.

I have also included the old Distant Worlds 3302 (DW1) route for those who want to retrace that journey home instead. 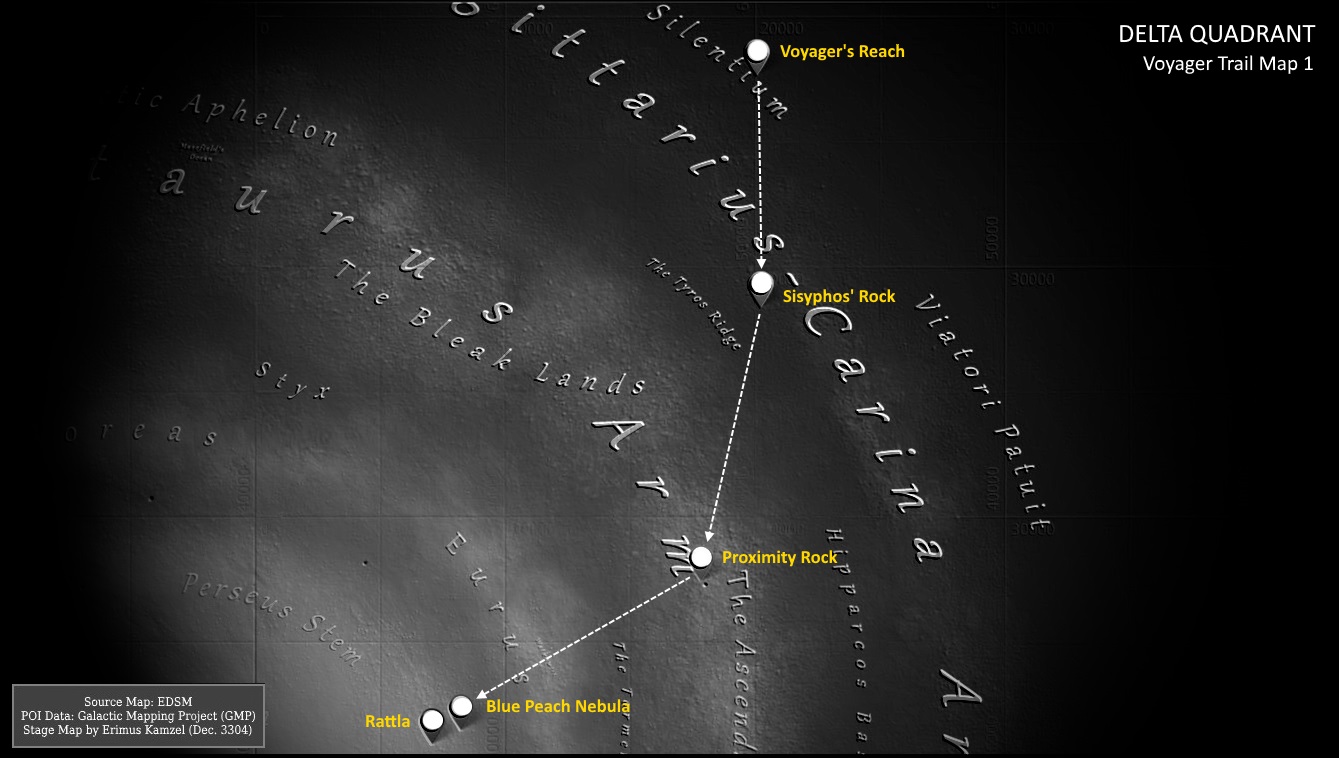 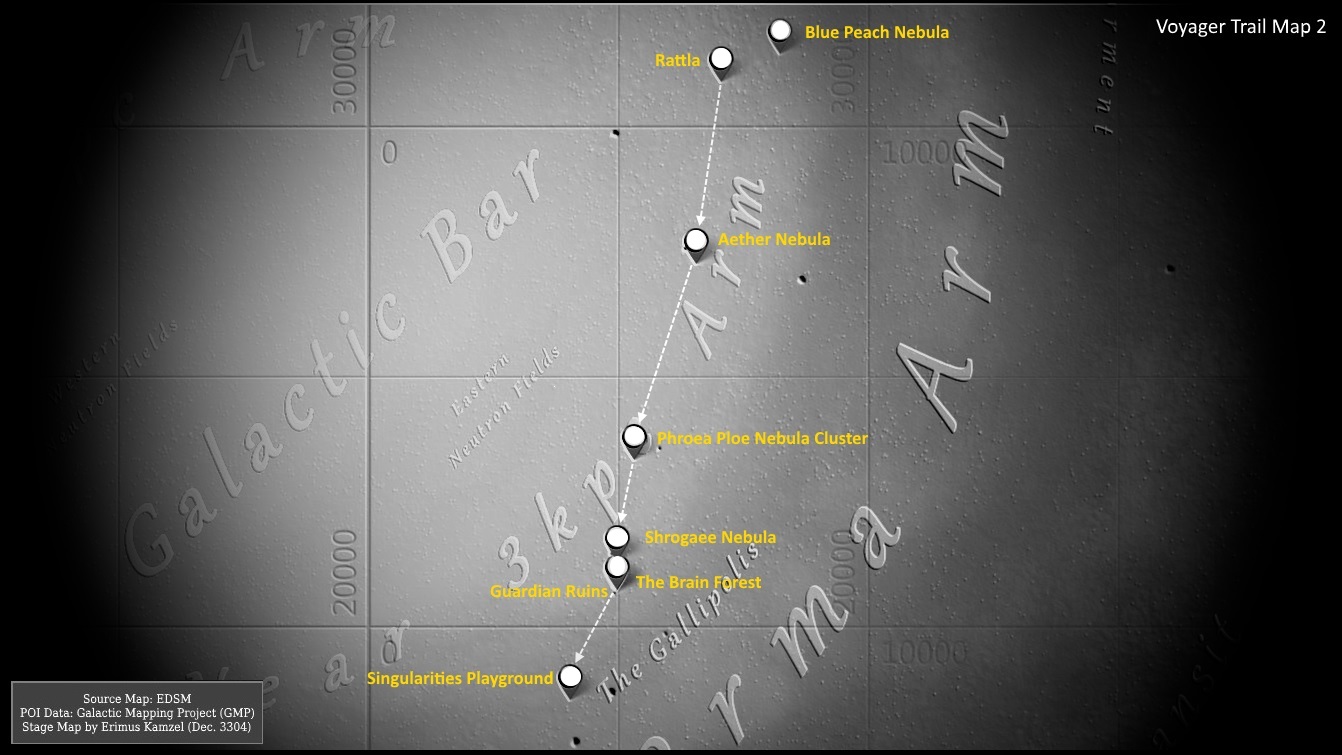 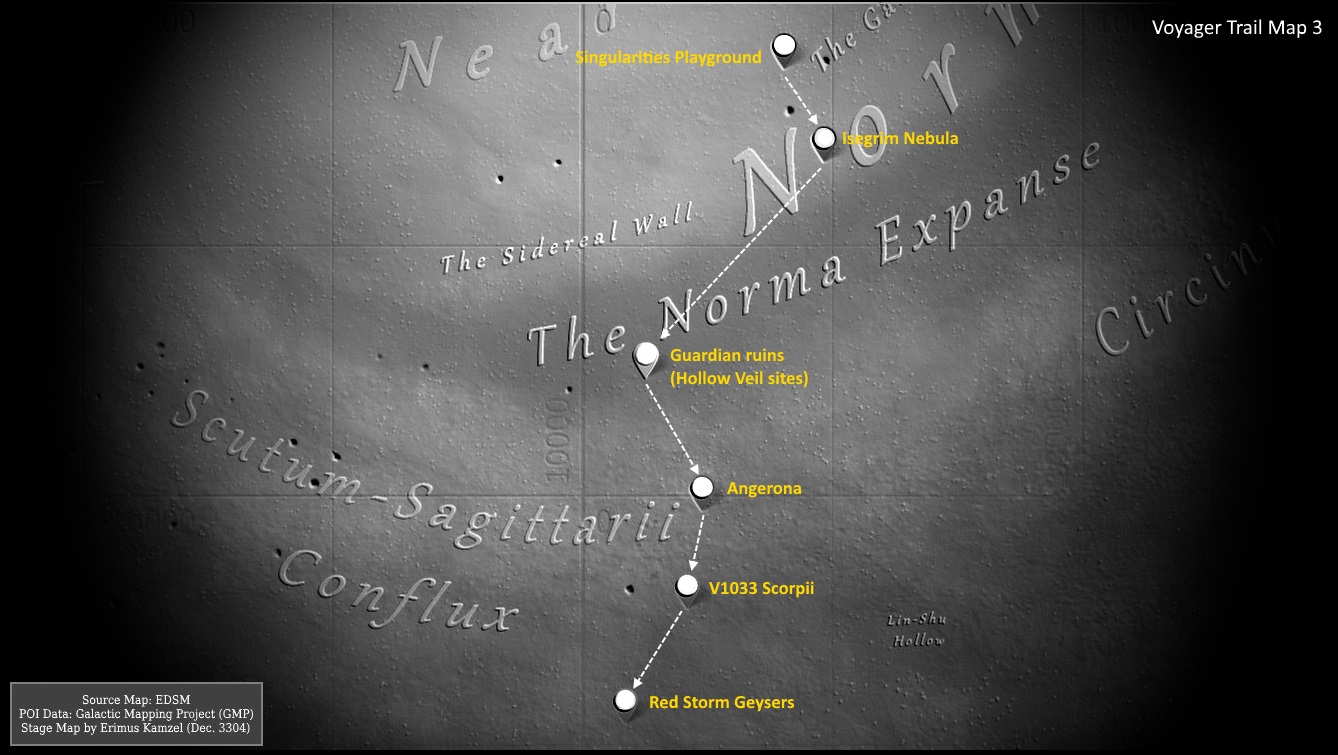 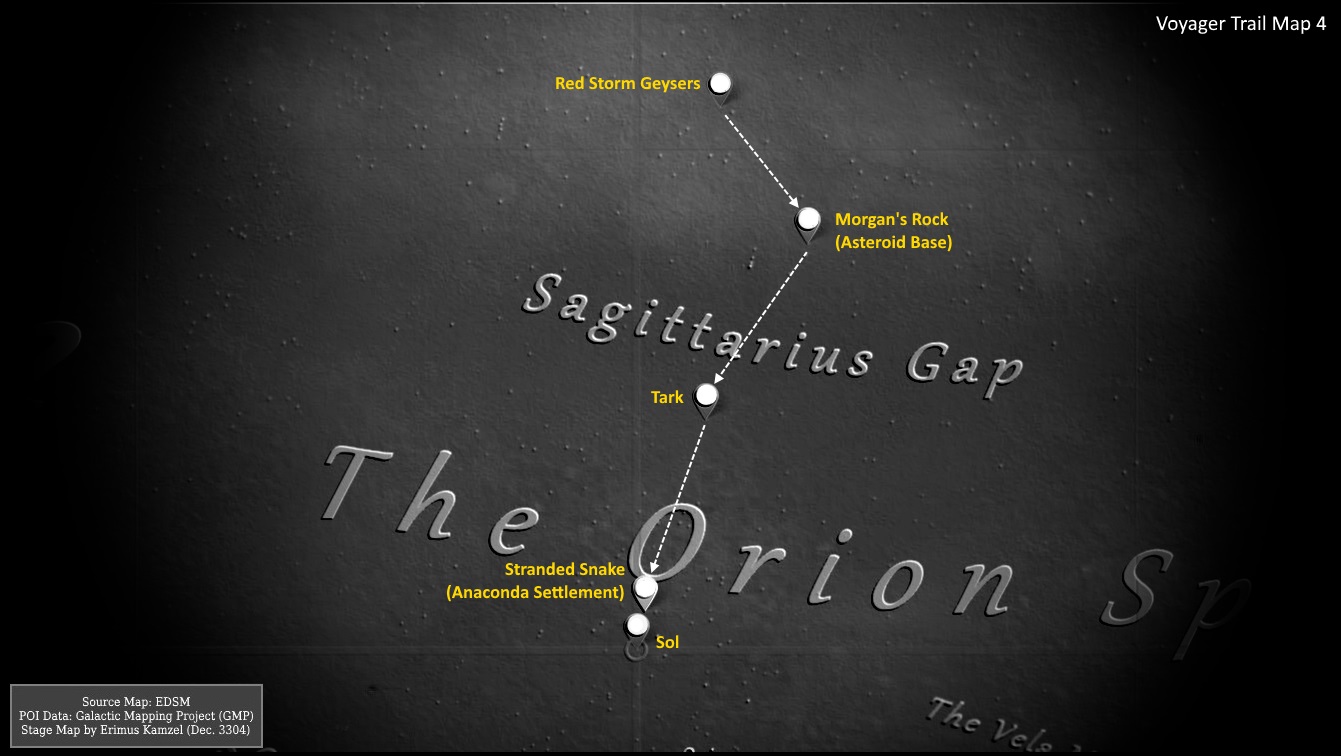 My thanks to CMDR McNicholl of Sagittarius Eye magazine for putting together this downloadable .pdf of the Outbound DW2 route. The .pdf can be printed and made into a booklet, with each page packed full of info about the route and its waypoints. I thought this would make a nice memento for those who took part on DW2. 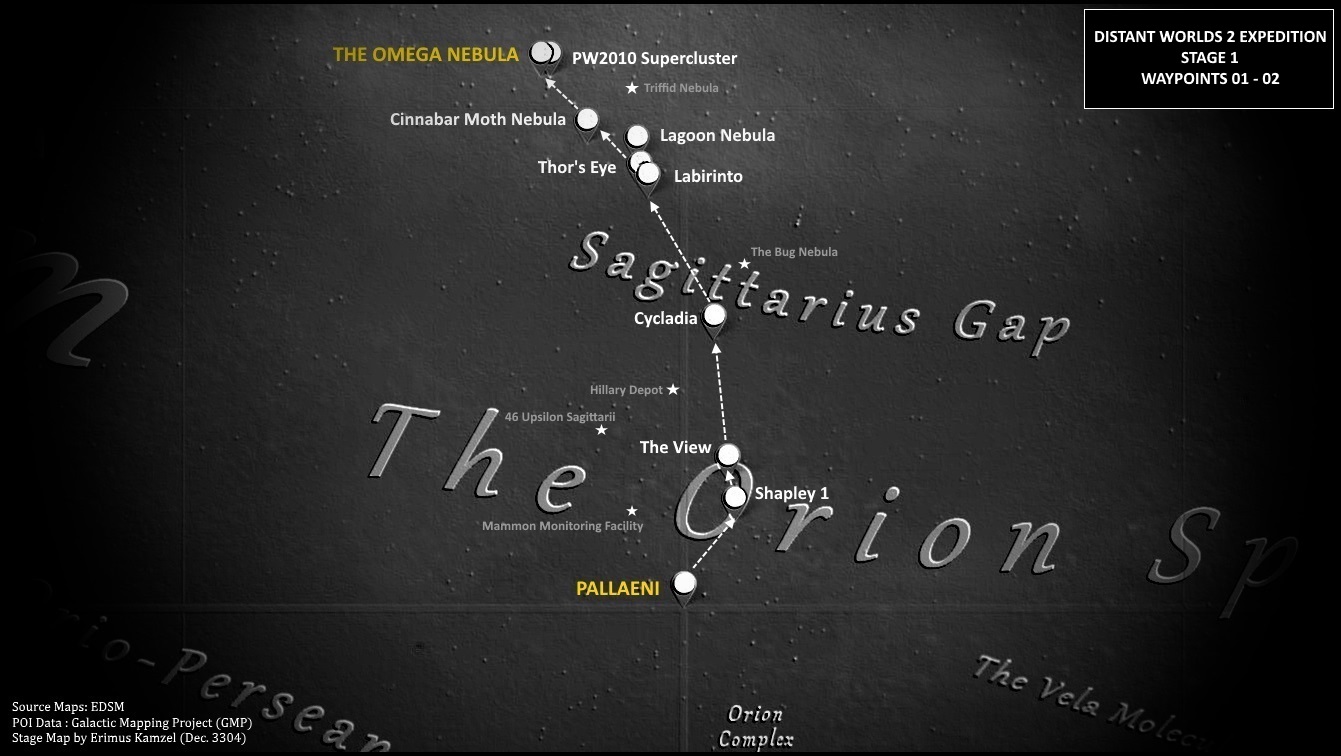 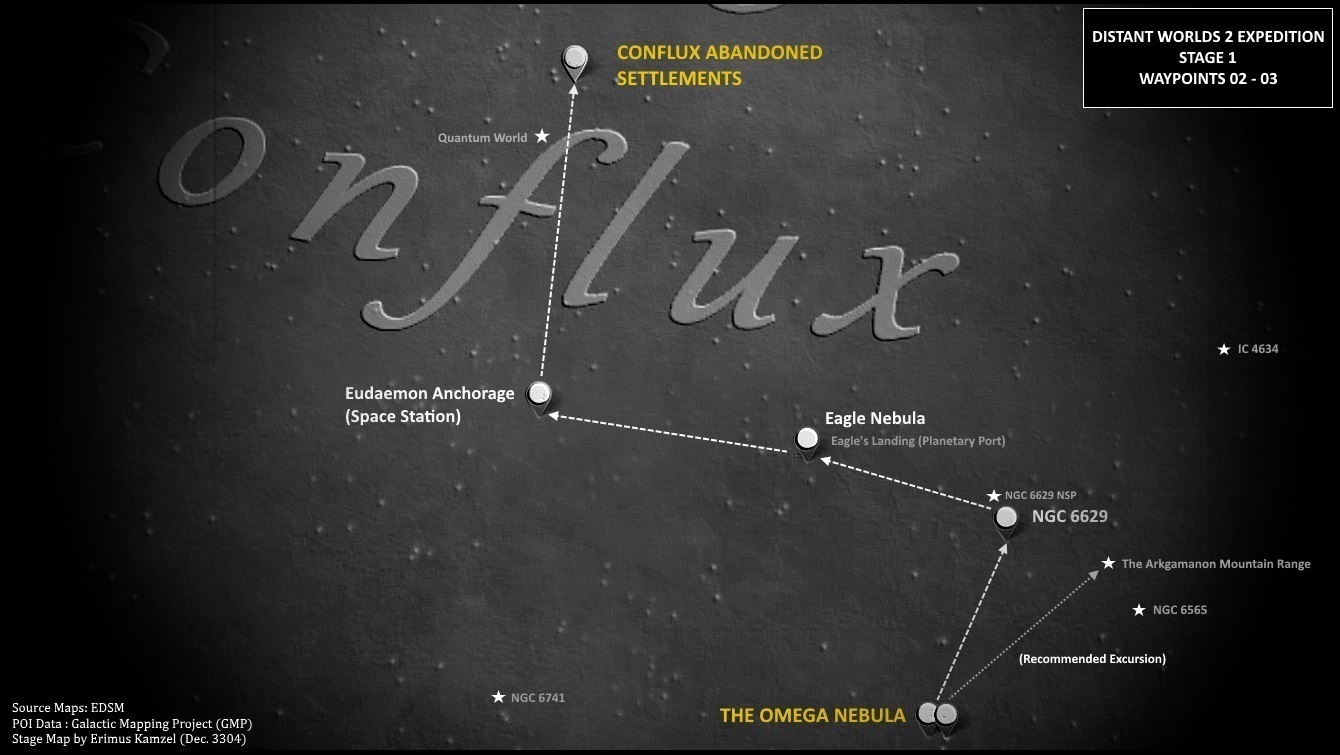 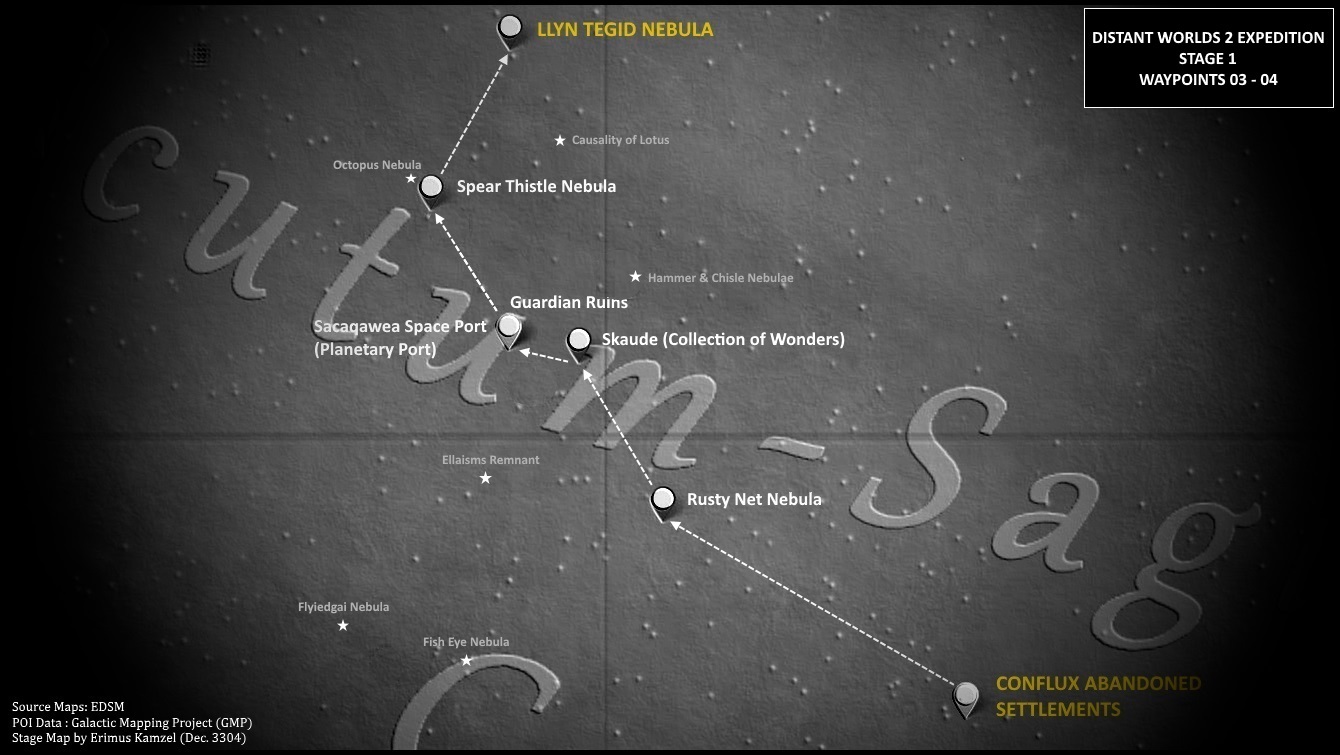 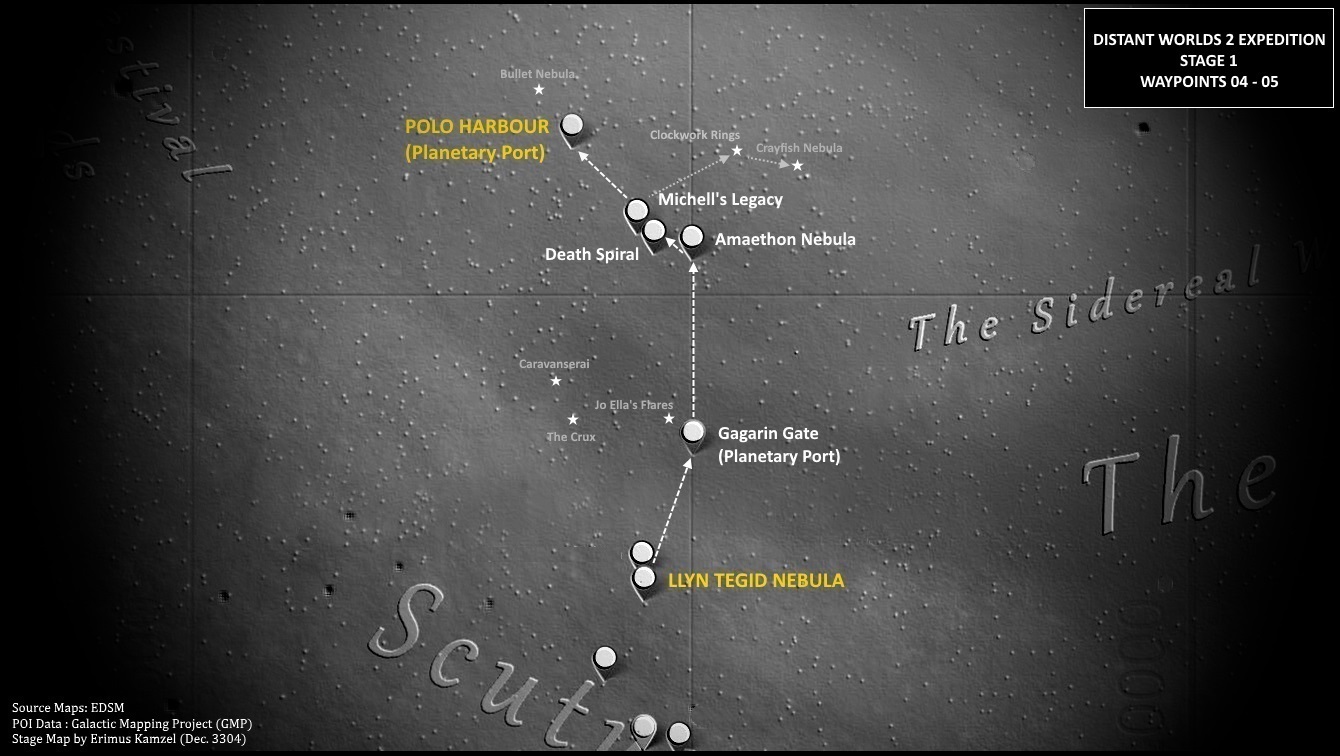 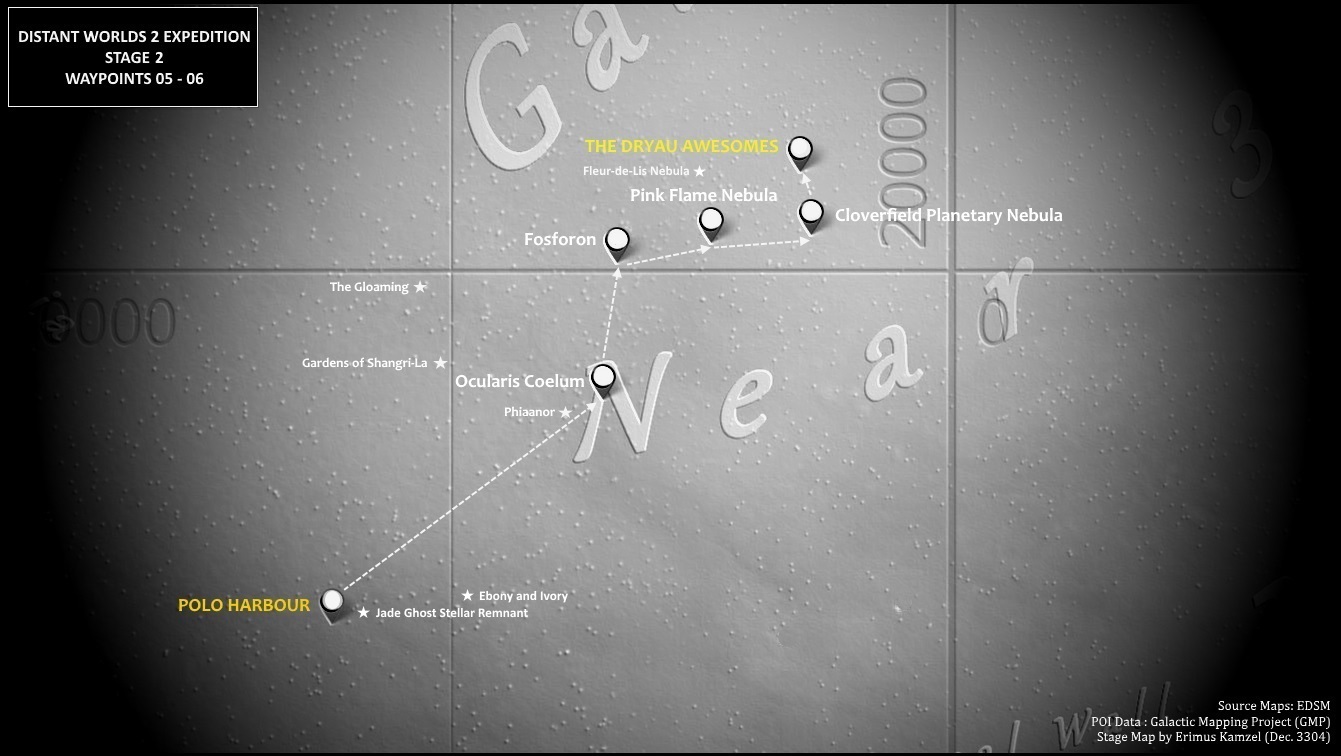 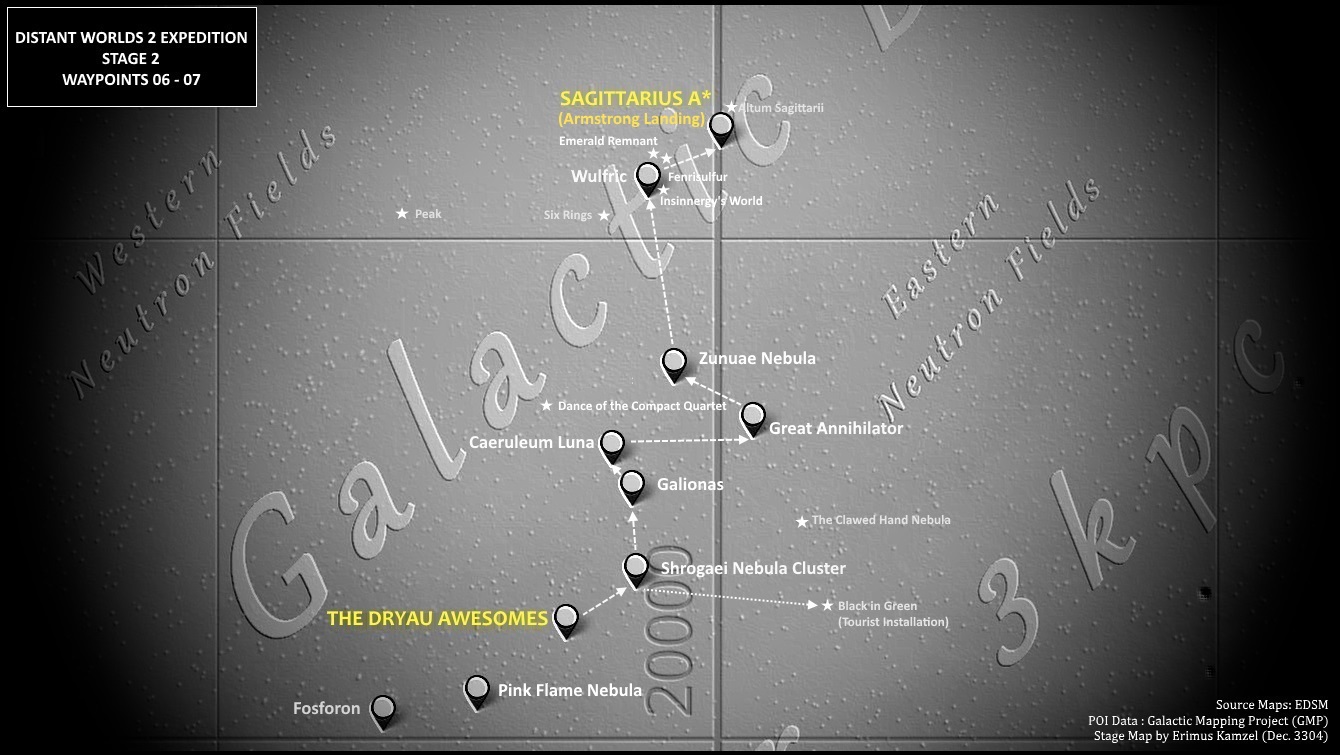 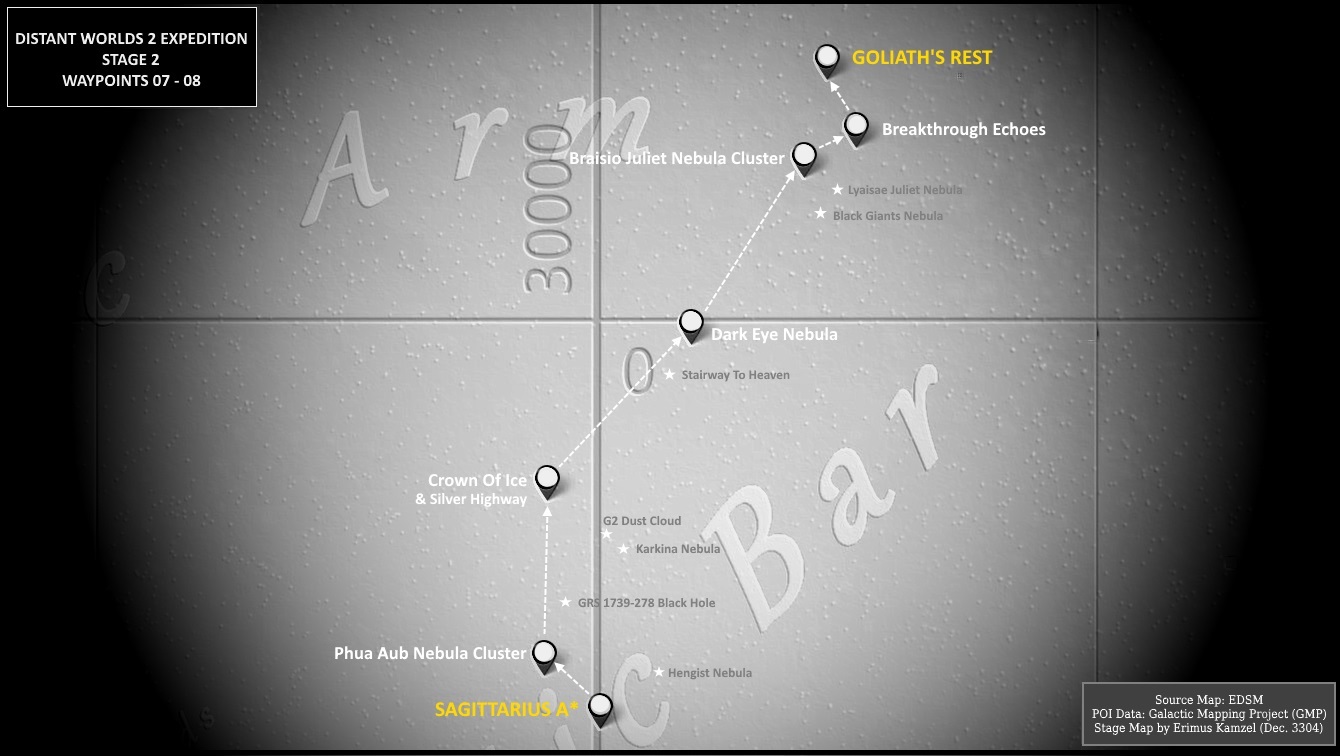 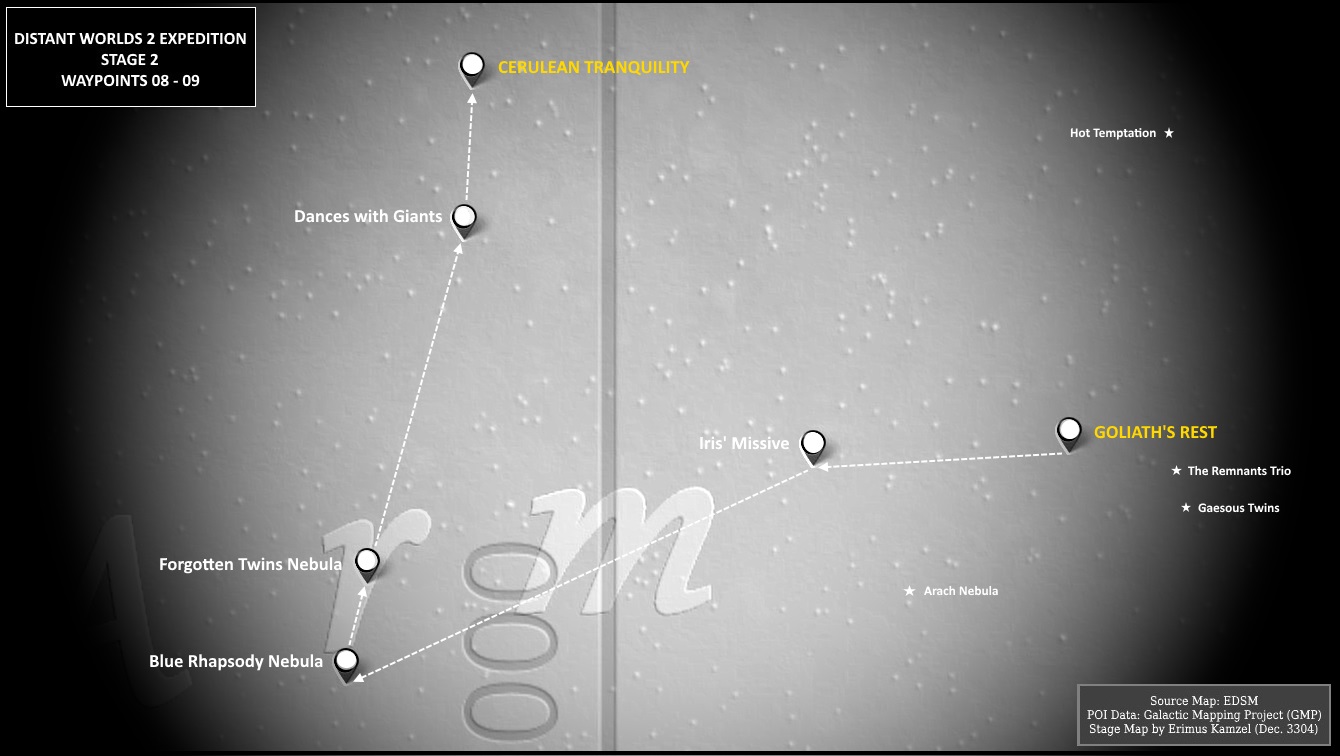 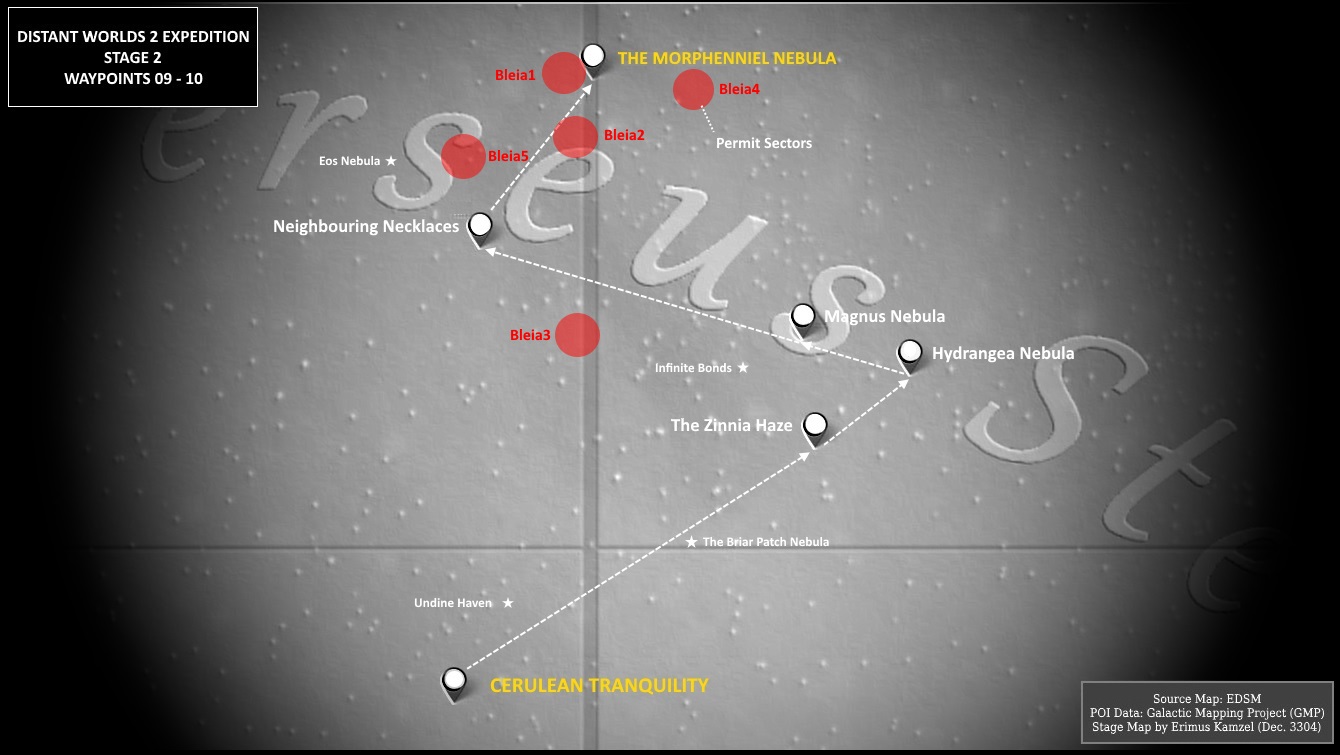 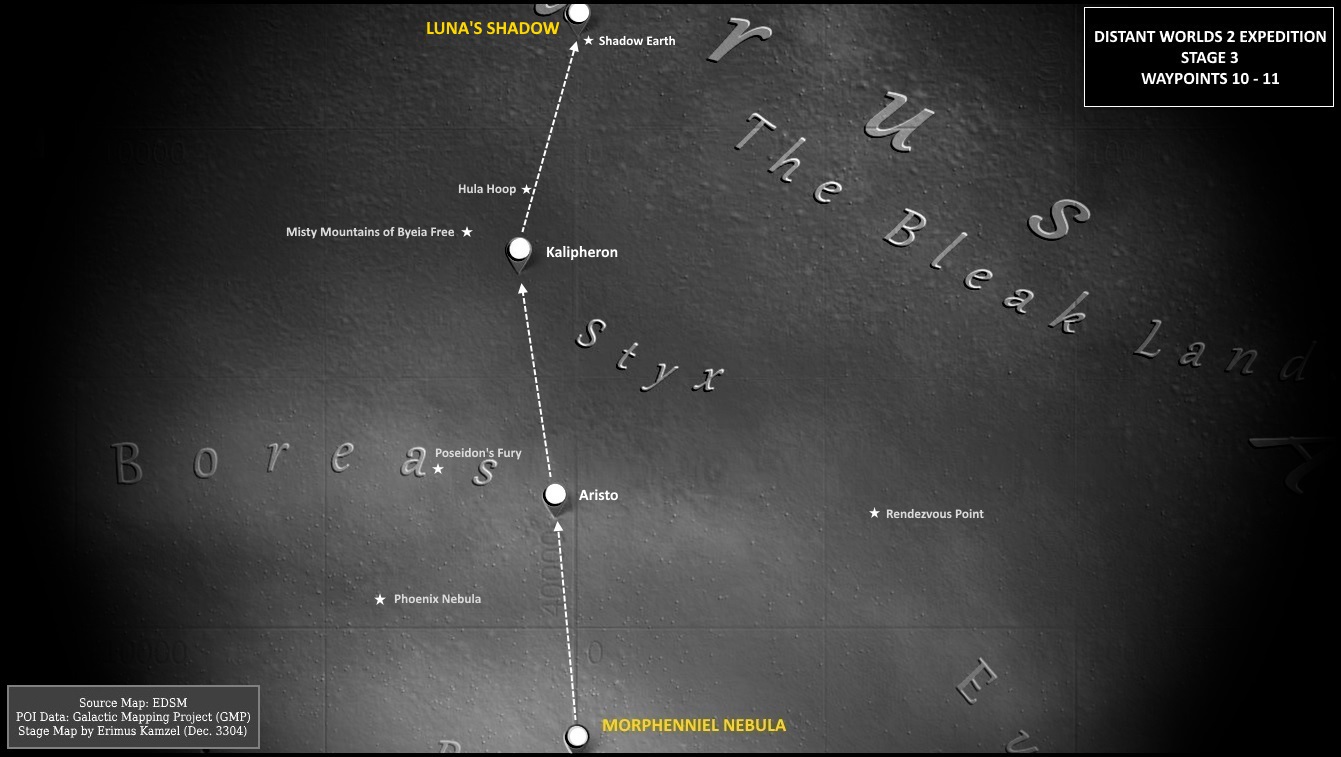 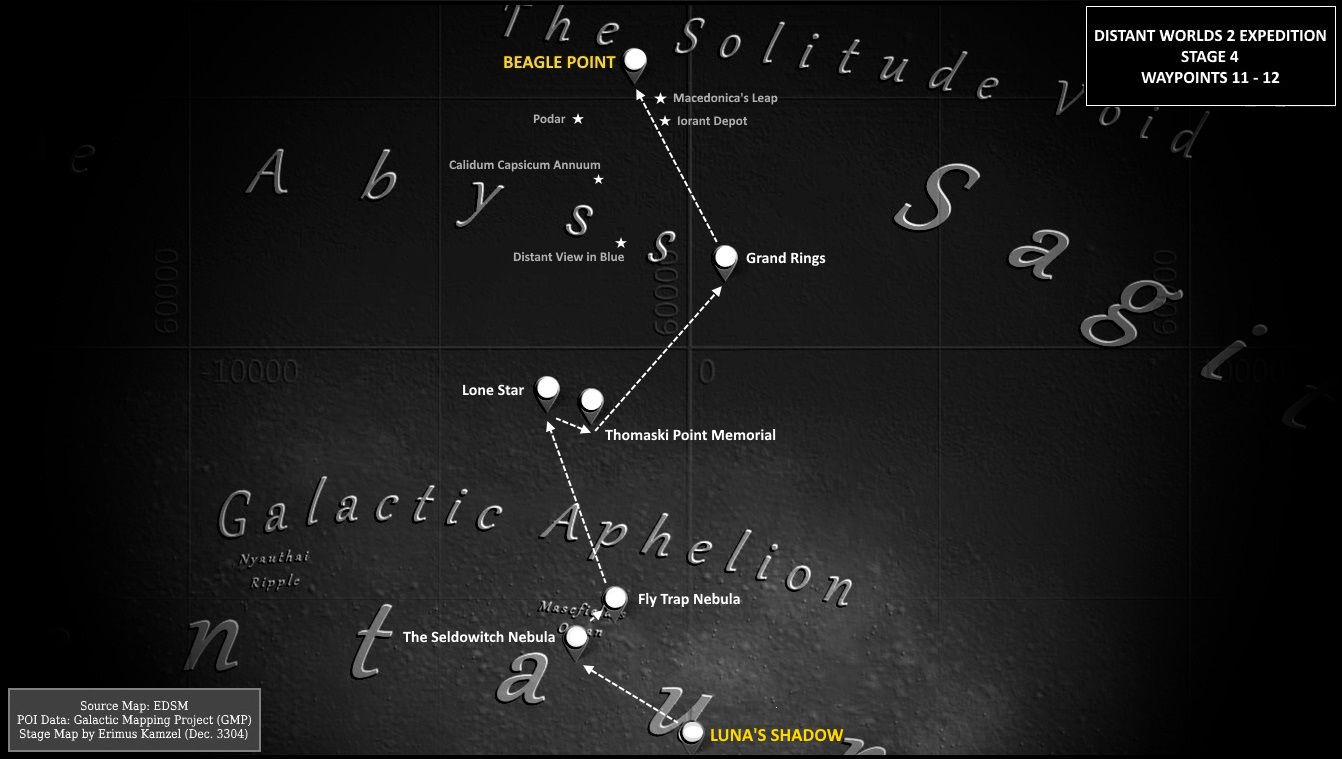 Excellent. Thank you, to the entire organizing team, for putting this expedition together! I don't think you hear enough praise. I know you all have put in a load of effort into this.

I heard this route will be made into a pdf that we can download as a keepsake??. please please!!

K
Just touched down on Beagle Point 2. Thanks to all who put this great expedition together.

I'm one jump away Kort. I'll have a cold tinnie please

EDIT: Made it. I'll join the thanks to all those who helped put this together. It's been amazing
Last edited: Apr 25, 2019

Right so everything was smooth sailing. However. Putting in the 10th waypoint coordinates I saw that the Armstrong landing (7th waypoint) has not checked off..... what do I do.

a) throw my screen and console out the window followed swiftly by myself.

b) contact edsm to see what they can do

c) travel the 17000 lyr round trip to try again? which will most likely see me not finish in time....

Any recommendations would be appreciated o7

x Harlon Nayl x said:
Right so everything was smooth sailing. However. Putting in the 10th waypoint coordinates I saw that the Armstrong landing (7th waypoint) has not checked off..... what do I do.

a) throw my screen and console out the window followed swiftly by myself.

b) contact edsm to see what they can do

c) travel the 17000 lyr round trip to try again? which will most likely see me not finish in time....

Any recommendations would be appreciated o7
Click to expand...

EDSM is completely optional! I was in contact with DW2 support for a similar reason.

This was my question:
But how do you verify if somebody has been in Palleani and Beagle Point within the timeframe if not through EDSM?

And this was the answer:
We can check with frontier, that’s why there is a data consent request on the form


So don't worry If you're there in time, you'll be fine!