Well, I know, this is not a galactiс record, but still, this is the smallest red giant I've ever seen 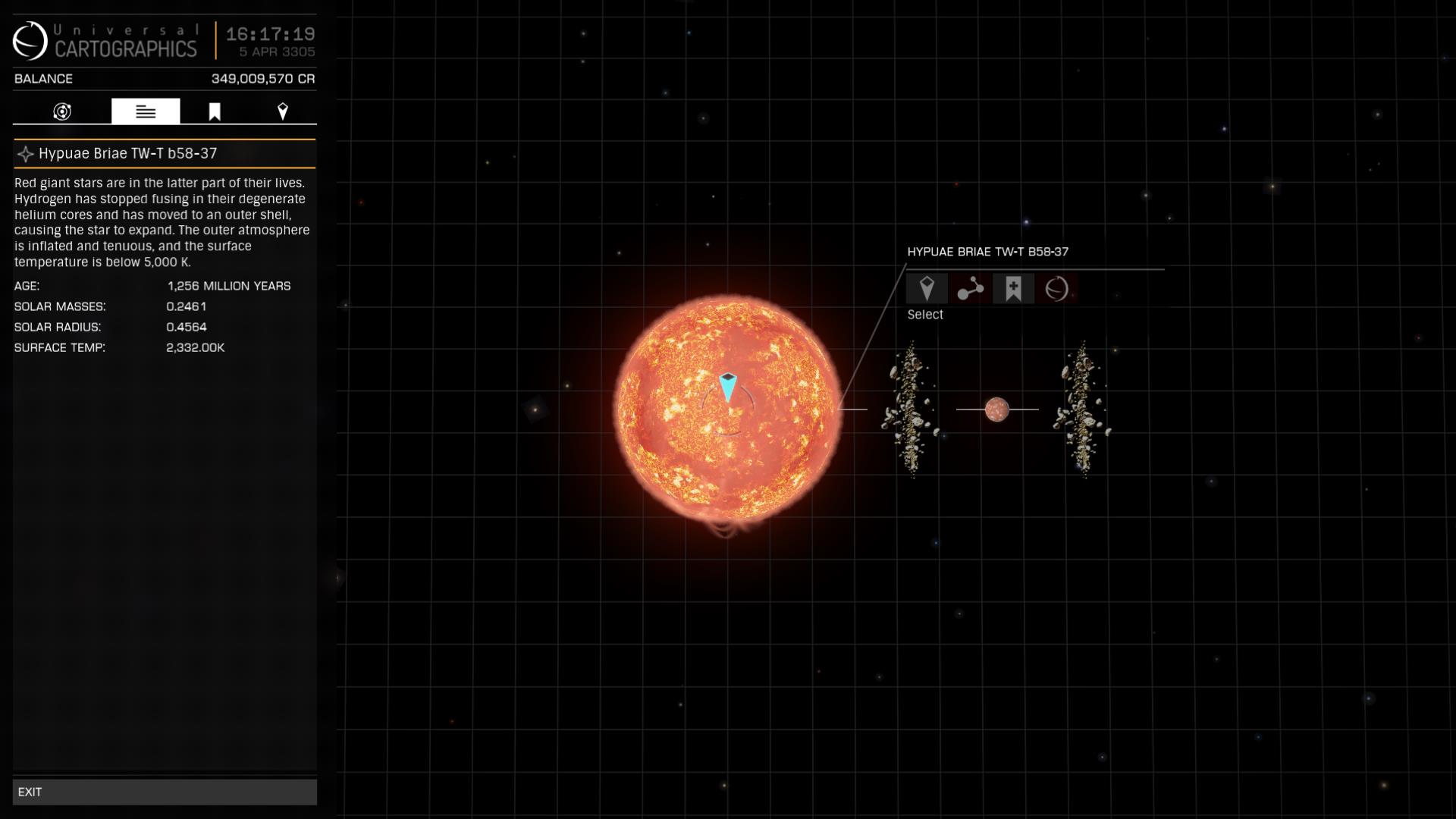 moon of a brown dwarf with large rings that pass within 300km of the surface, visibly move to the naked eye from the planets surface. The most fun part however is sitting in the edge of the rings and flying past the planet and having it just miss you, see the video made by chank saotome - Source: https://www.youtube.com/watch?time_continue=1&v=H2UKmPjjjHU


also its a green system if you need jumponium matts

Name: Polonium Trees
Game map search ref: Swueneia XV-C d57
Description: This world is a dream come true for anyone seeking to top off on level 3 jumponium on the way to outer rims. Orbiting 53 kLs around a class A star is a little moon (C 2 A) with lots of bio signs. The life happens to be Crystalline Shards. It is a long way out, but every tree-top in this crystalline forrest is made of Polonium. But to those not careful this world can turn into a nightmare when the SRV gets impaled on one of the large shards. It is also a green system.

And this has to be the most expensive tree ornament out there. Not even the trusters where able to get this to budge.

Every signal is a Polonium cluster:

M
Here's one that seemed worth sharing, mostly for the moody visuals.

Name: Innsmouth Deep
System: Pheia Briae BE-B d2238
Description: Though it provides more heat than light, an M dwarf supports life in a distant orbit around this ancient pulsar. Lit chiefly by the dim purple hues of the nearby Magnus Nebula, and lying near the borders of the mysterious Bleia sectors, these shadowed worlds call to mind the legends of haunted Innsmouth of old Earth ghost stories. Nevertheless, with three accompanying planets ready for terraforming, there will be plenty of room to expand should humanity ever settle here. The neutron star makes this a convenient transit point for pilots visiting the nebula.

Some additional notes: The various landables provide a variety of resources, including volcanic sites on A1 where Polonium can be found, but they don't quite add up to a green system. The M-class secondary hosts an ELW, a non-terraformable WW (thick toxic ammonia atmosphere, ew), and three THMCs. All of these were scanned by other folks before I got there, but since no bodies were mapped I may be the first to stop for a closer look. Since the system's planets are all very dimly lit and include two rather remote water-bearing worlds, the Lovecraft story Shadow Over Innsmouth popped into my head here. 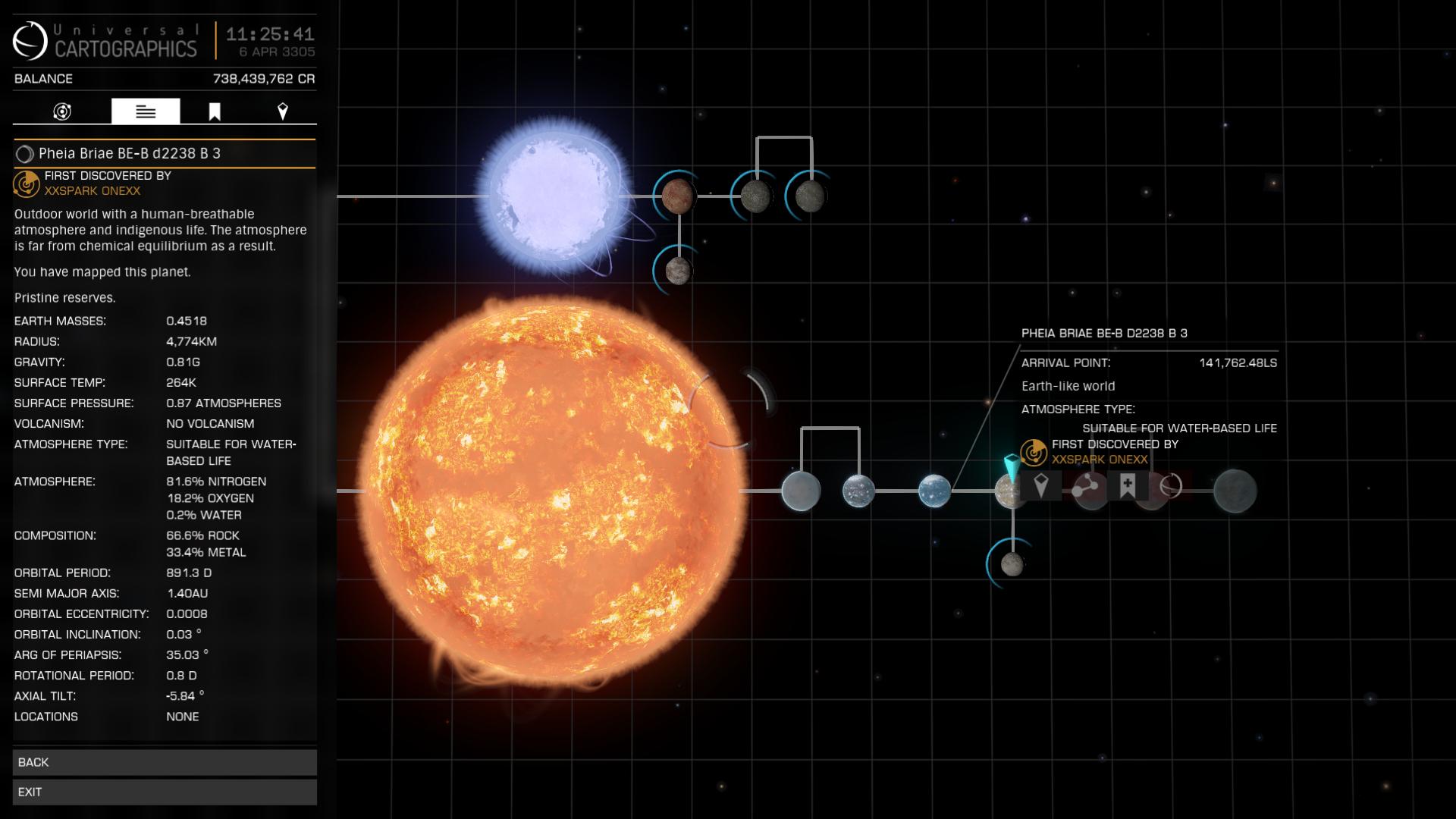 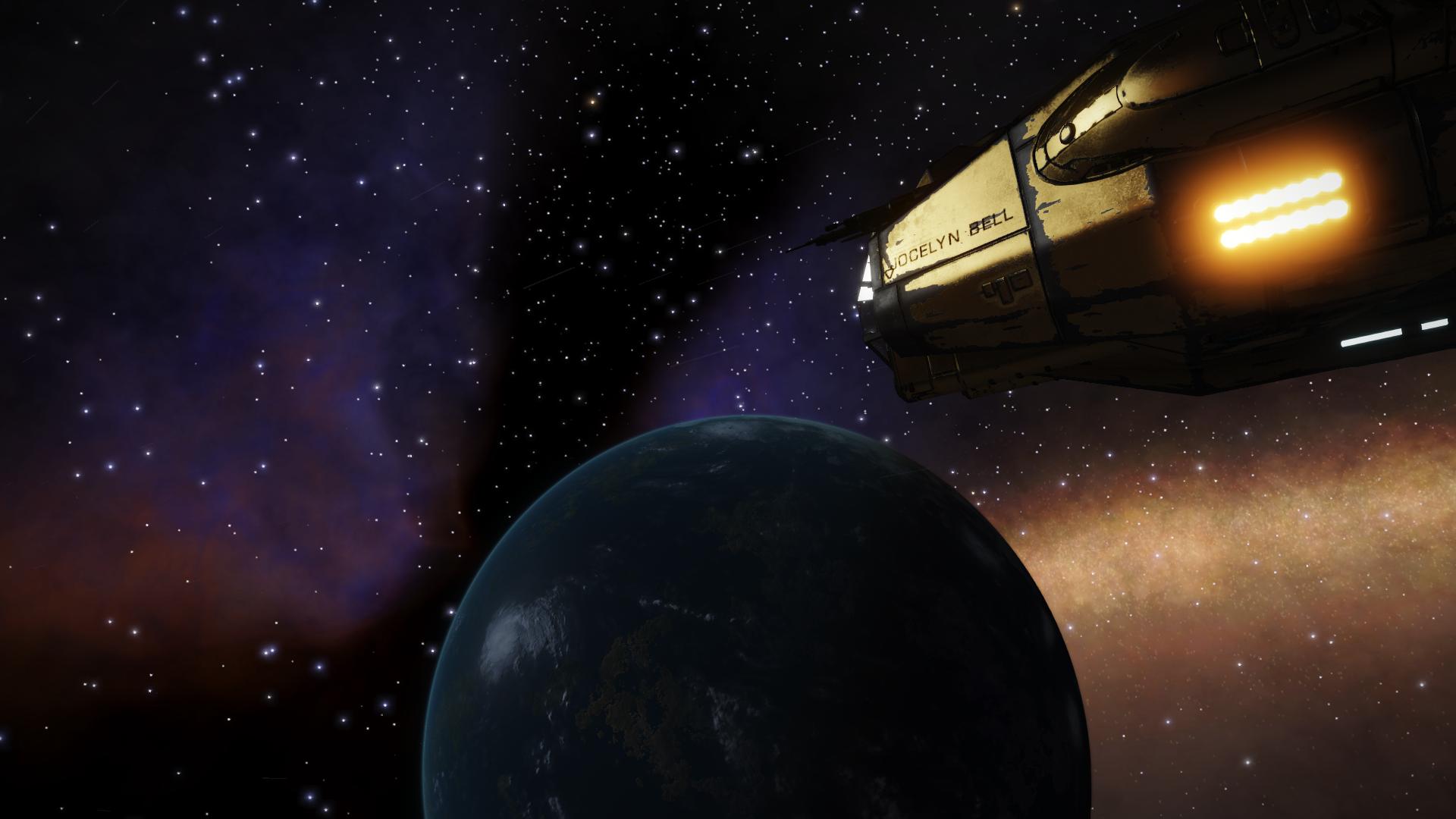 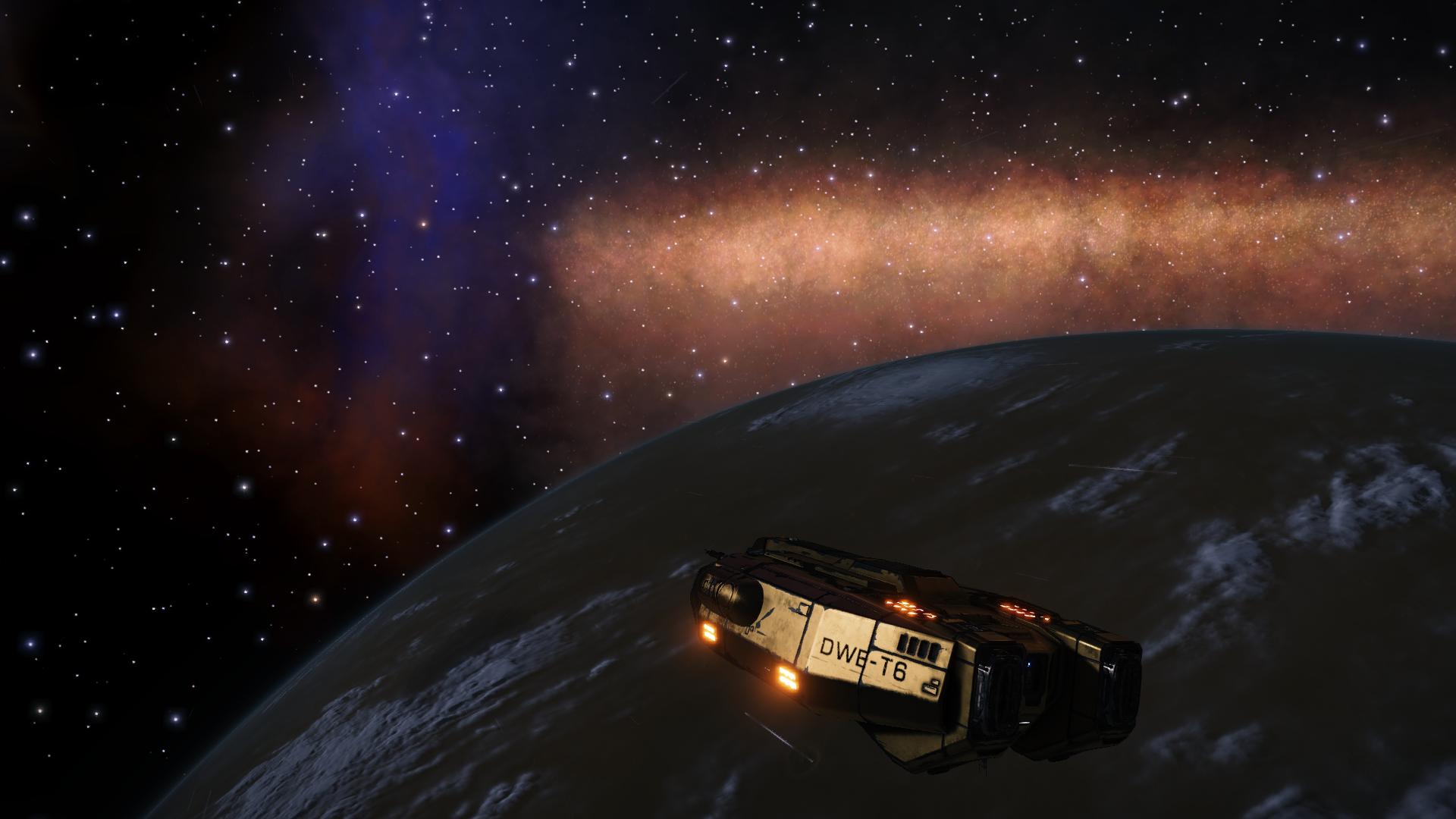 Name: The Fast and the Furious
System: https://www.edsm.net/en/system/id/36567469/name/Eorl+Bru+VP-O+e6-44
A very fast spinning neutron star (bottom) next to a white dwarf (top). This is the view directly after system entry: 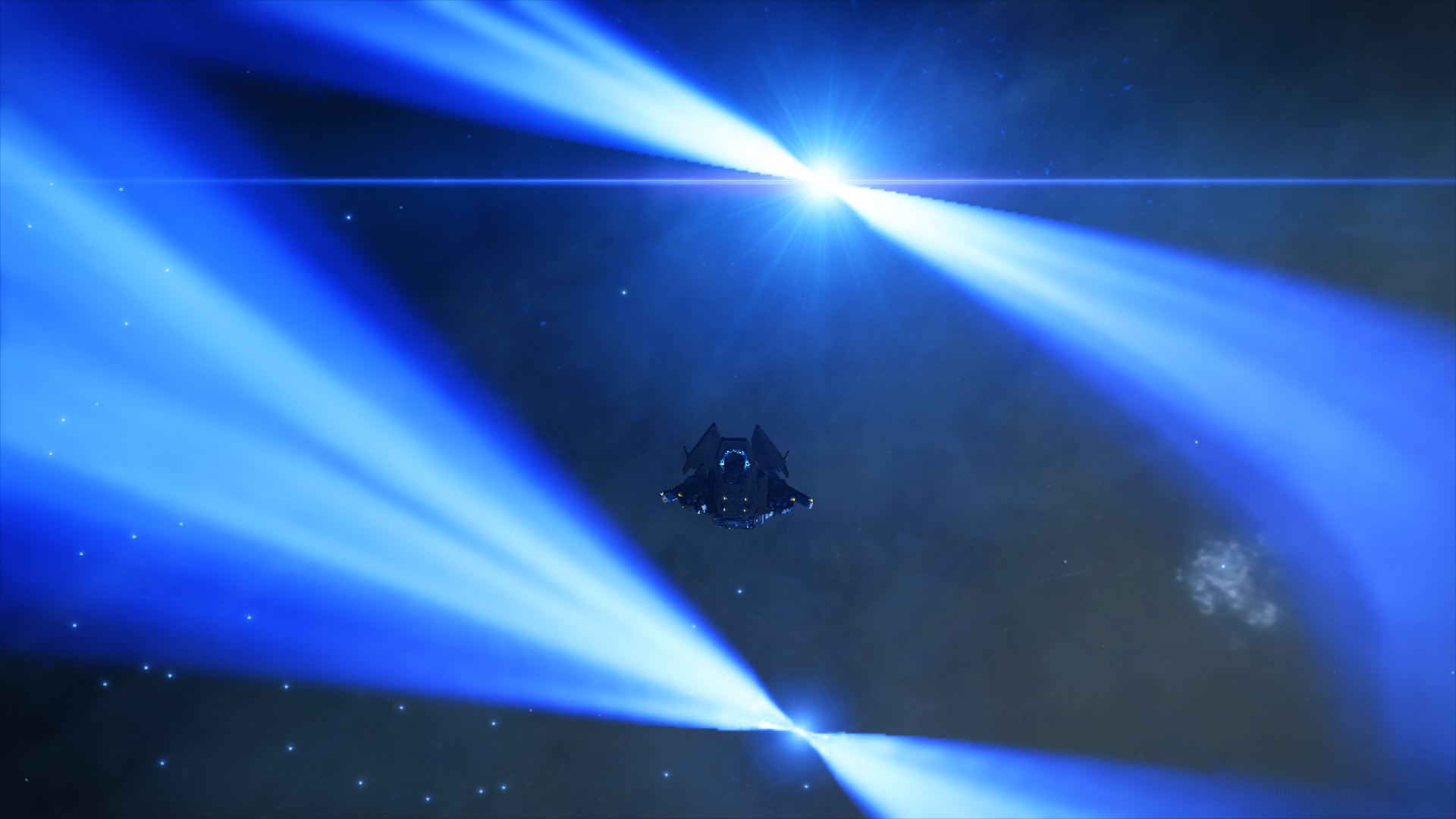 (Playing on a toaster, sorry for the image quality)

G'Kar quote: "We are all the sum of our tears. Too little and the ground is not fertile, and nothing can grow there. Too much, the best of us is washed away." 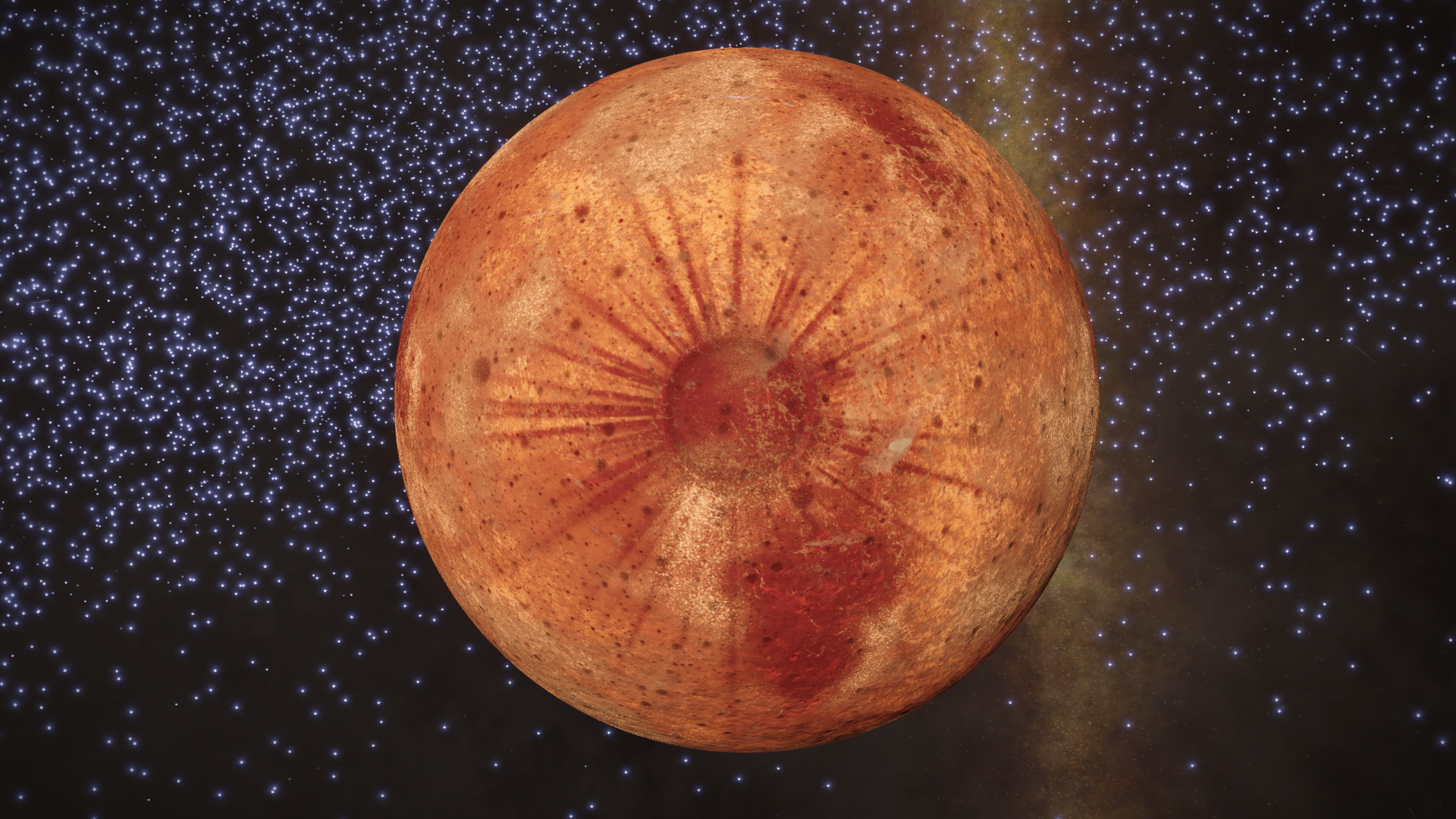 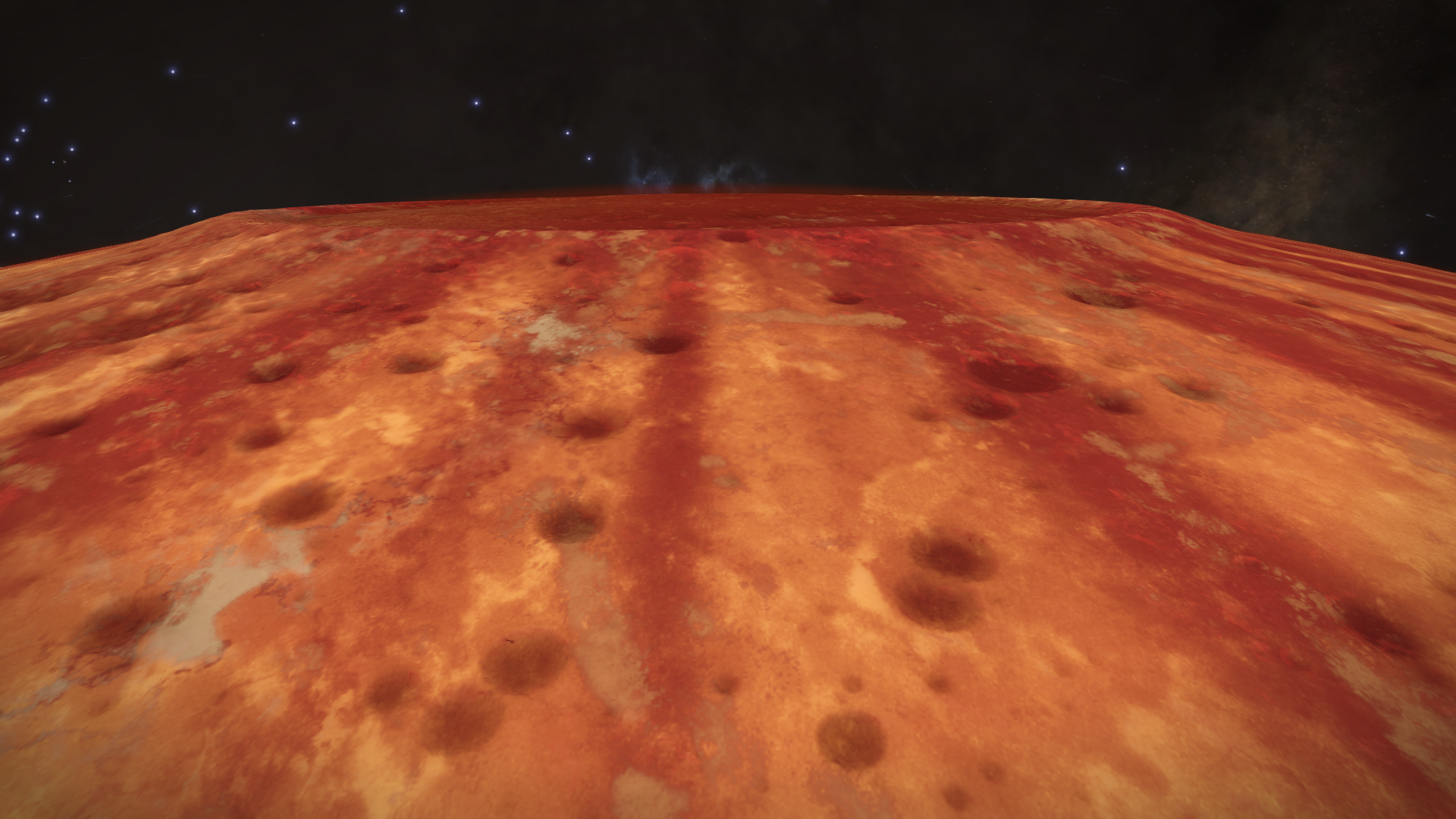 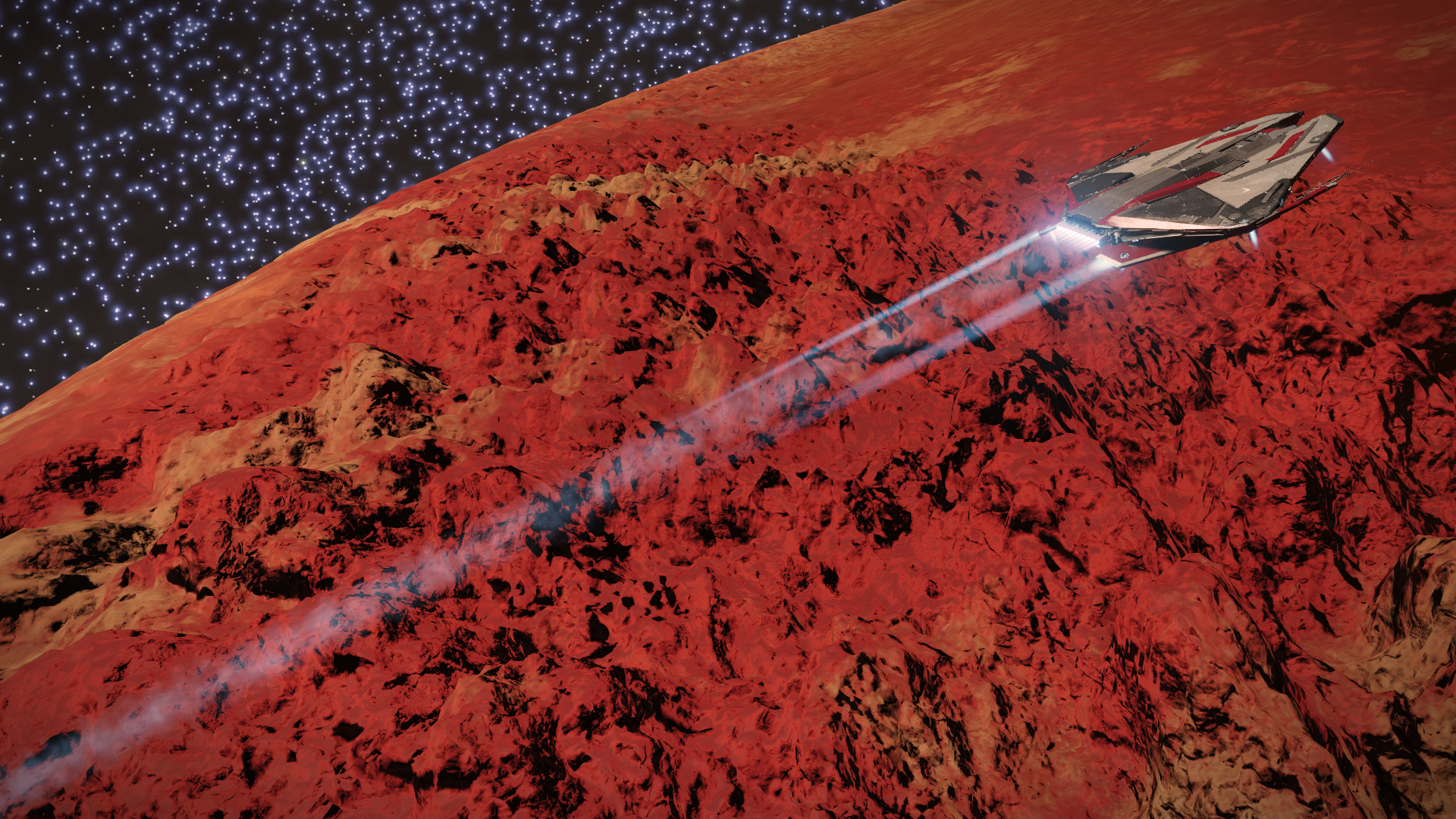 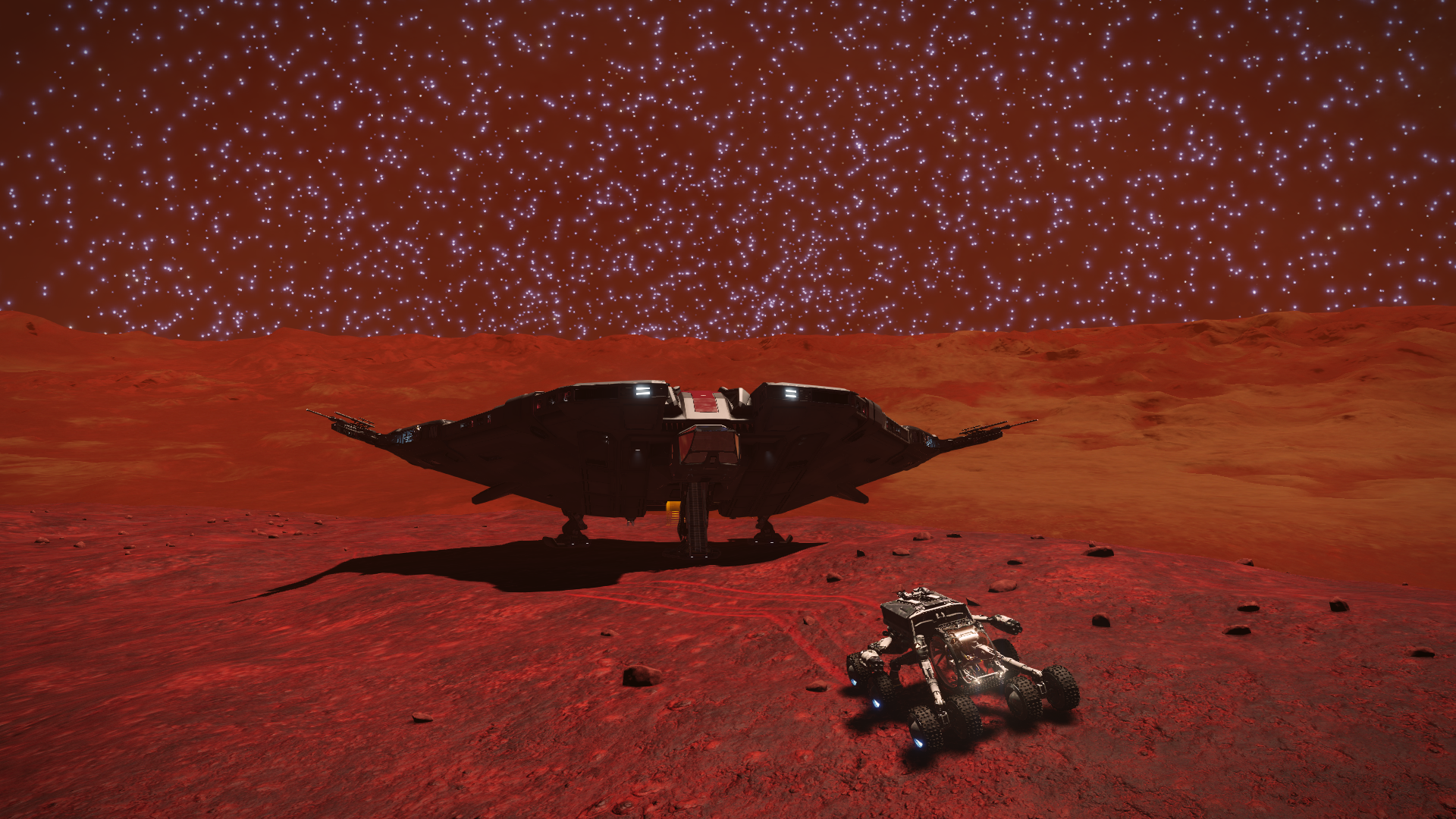 During the Distant Worlds 2 expedition, commander Jav Marlo passed by this system and realized that there was the closest gas giant to a star he has ever encountered.

I thought it was time to head for the Morphenniel Nebula the closest visitable nebula in the middle of the mysterios shadow zone of Bleia. But it was not easy to plot a route to the system Bleethuae NI-B D674, where the base camp was. I had to approach little by little, locking in the navigation computer the systems that took me in that direction while avoiding the shadow zones of the Bleia sectors in the way.

The process was tiring, and I had been flying without resting for days, so I decided to make a stop in the way before reaching the basecamp. Anyhow, I was way before schedule. I was looking for a suitable place when I jumped into system Phroi Byoe FE-B c29-23, which contained a class V gas giant orbiting very close to the secondary star of the system. I decided to make an approach to enjoy the views. 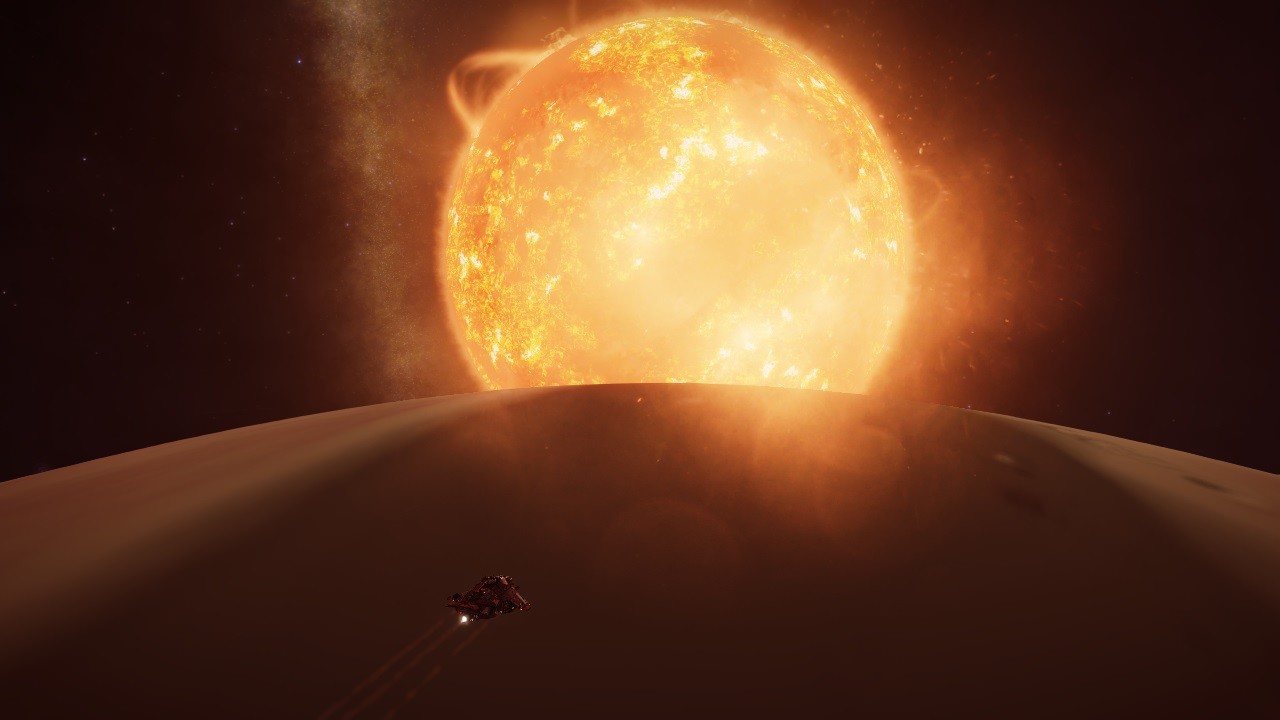 I think I have never seen a gas giant so close to a star. The view was mesmerizing. I flew around the planet before leaving looking for a place to land. 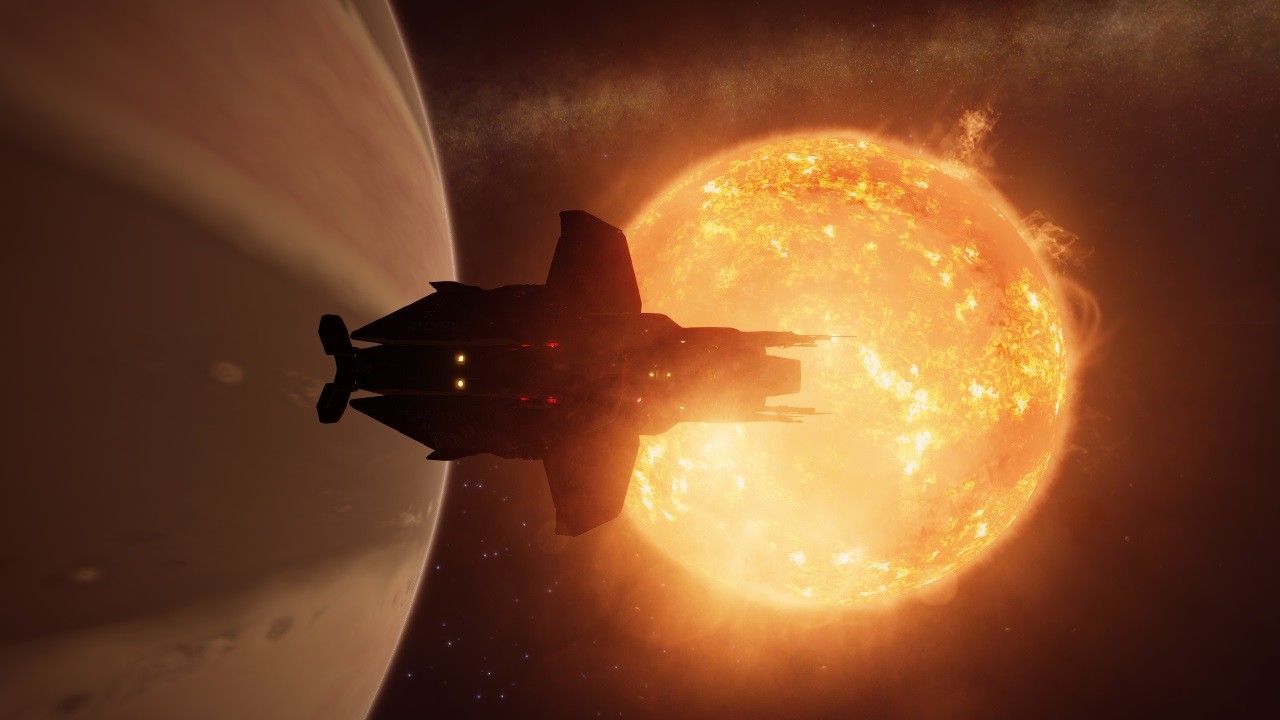 I landed on the third moon of the primary star, and I could enjoy a beautiful binary sunset that reminded me of an iconic scene in an ancient movie from the twentieth century that told a story that happened a long time ago in a galaxy far, far away. 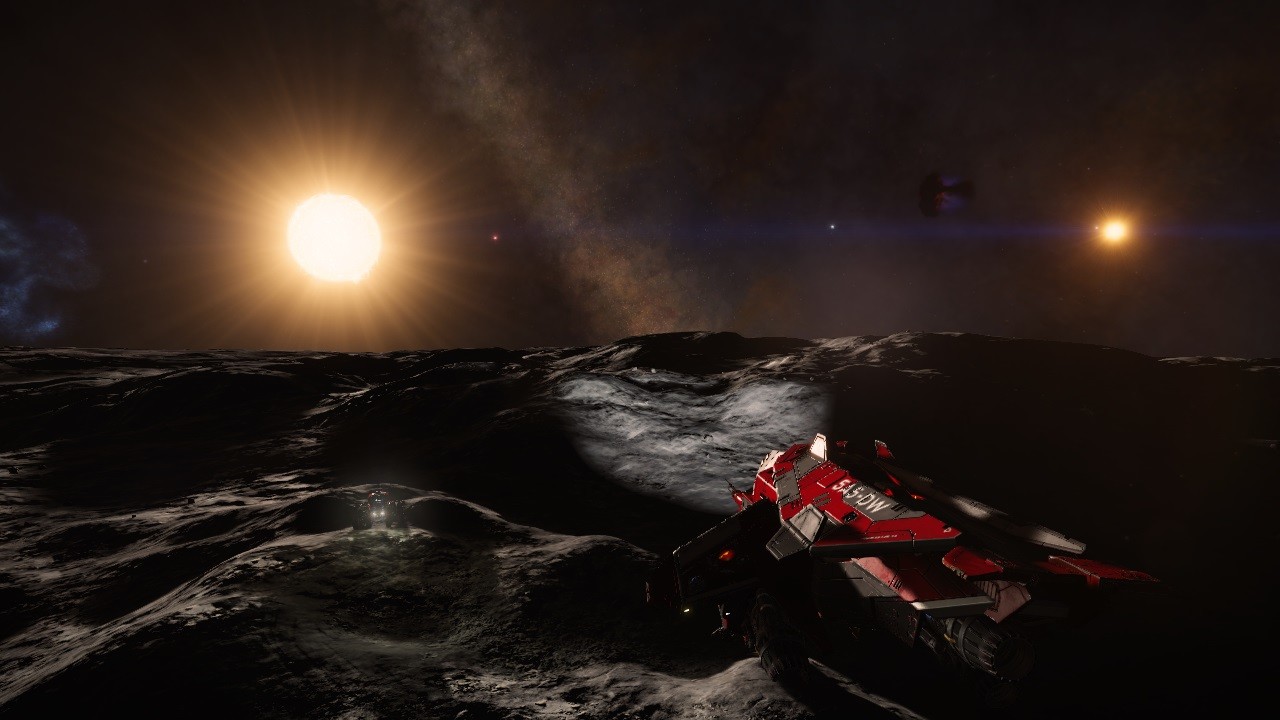 M
Bleethuae RK-N d7-625 2C or 2B (Green System)
Twin Planets and eclipses are a thing in 2C. They are both fast moving. (.5 D, but landable)
They both have Geological Locations for easy meet ups.

Overall it's a pretty cool place. (couldn't upload the picture)

C
Hi everyone
Just a quick question.
How rare are Rocky Worlds that only orbit the primary star?

The main star is a S-class carbon star, in a close binary with an M-class star. There are a couple of landable planets orbiting the B star. Landing on planet B1 gives us a lovely view of the asymmetric twin suns that light up the sky of this red planet.

The smaller sun here is the M star the planet orbits, about 33 Ls away, while larger is the carbon star, more than 10 times further away (360 Ls), but considerable bigger in diameter. 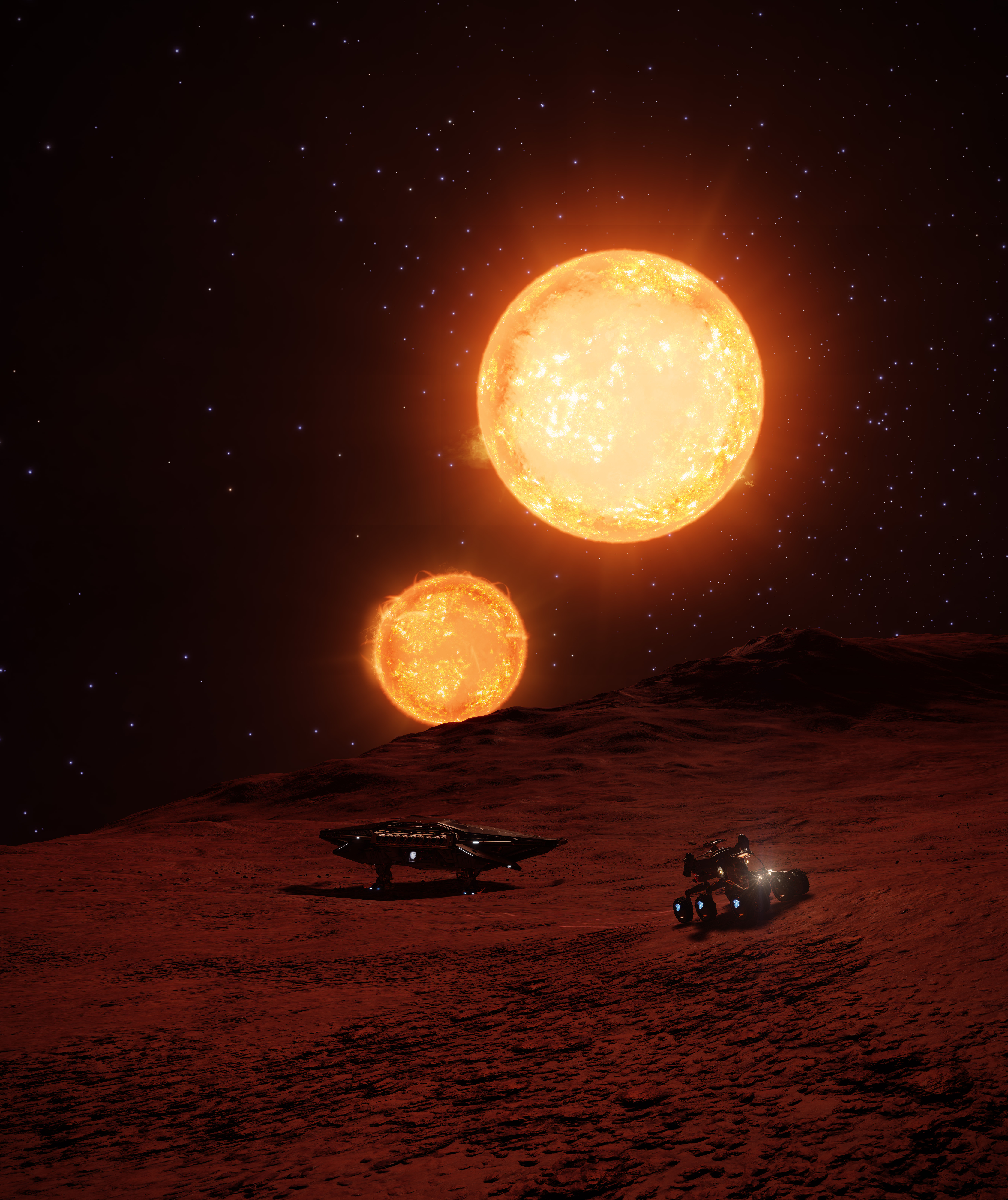 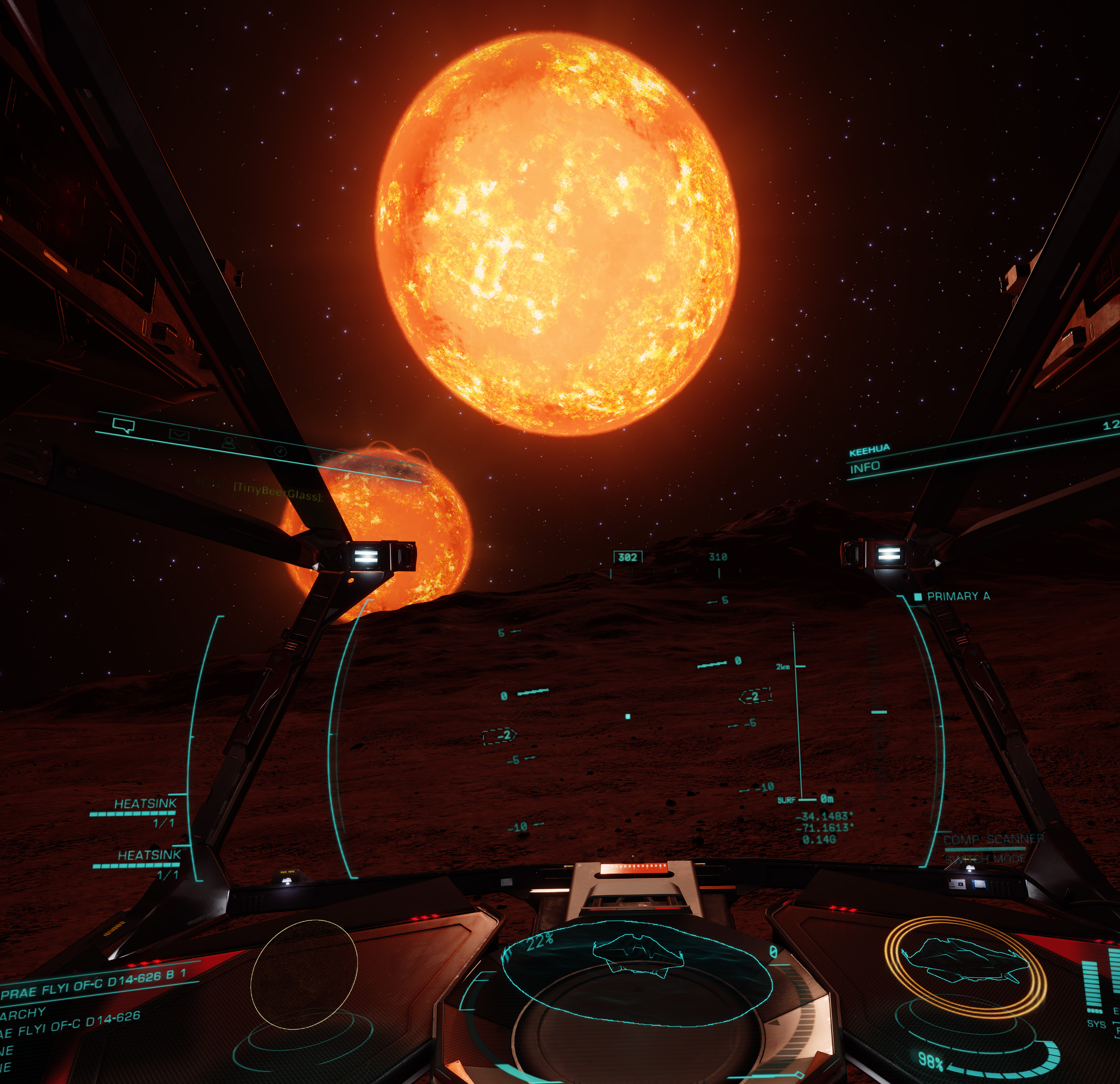 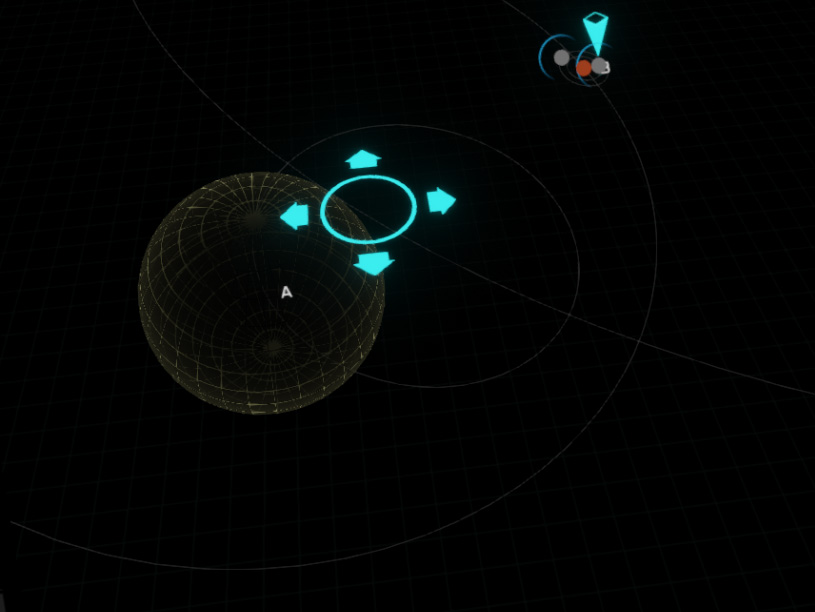 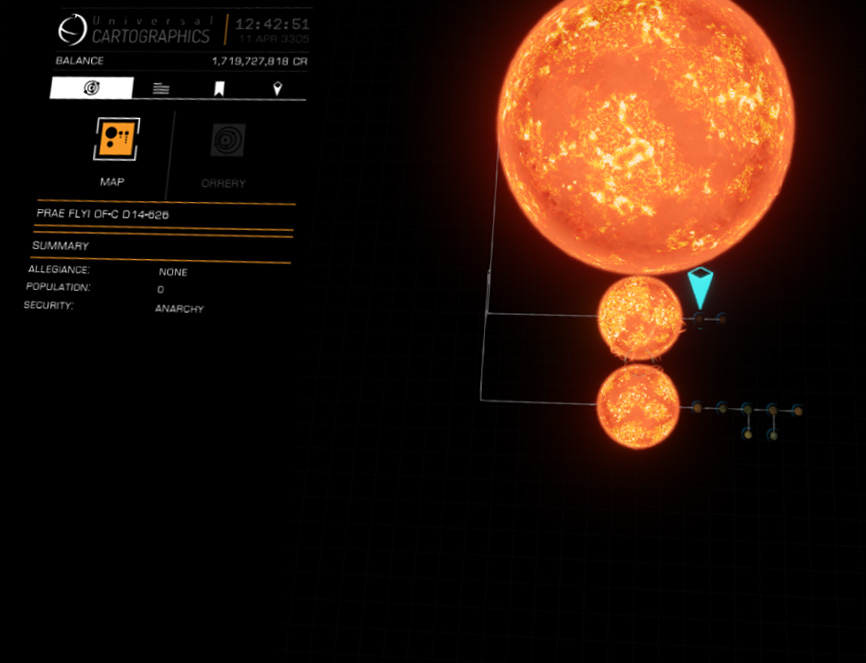 Found a system with three very bright stars forming a close triangle. The system also contains a couple of other stars and a landable planet (1.3g) that has geo and bio (anenomes) sites, suitable for meet-ups.
System: DRYIQI WO-R E4-3 A.
As a poi, I'd suggest calling it Holy Trinity, or maybe Three's a Crowd.

Check out PRAE PHIO SU-V D3-218 in Norma Expanse when returning from DW2. Triple ELWs, 1 water world, and 7 additional terraformable planets. Worth the credits for discovery!

Honestly don't know if this is a biggie or not, but I haven't seen many ammonia worlds at 69LS from the primary star.

I have found a highly unusual concentration of degenerate stars and black holes in Ryker's Hope, around EORL BRU KM-W F1-1766, nearly all undiscovered! There are hundreds of new neutron stars and more than a hundred new black holes just by looking at the local map. There are more objects here than 1 Commander can handle! 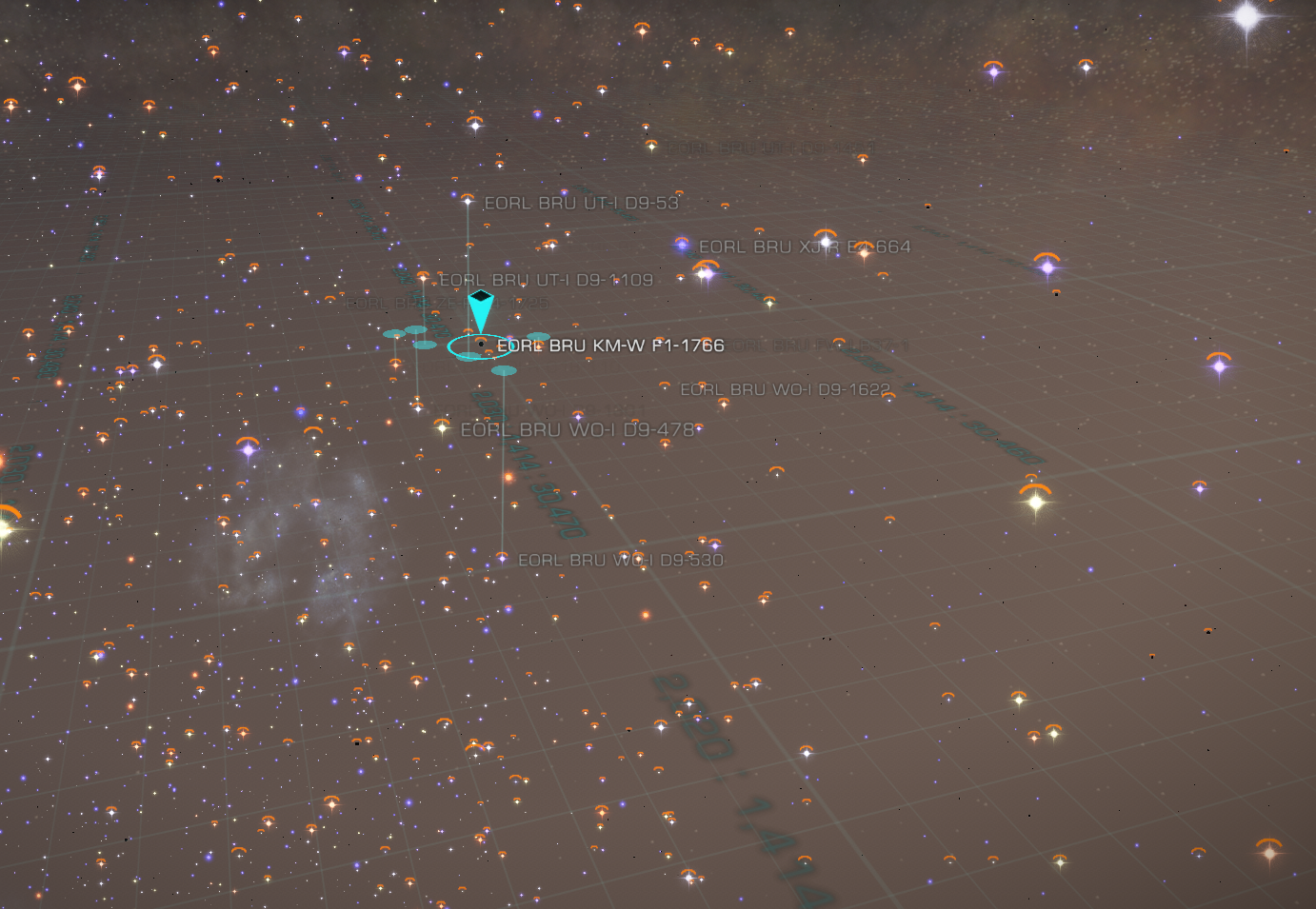 The high number of black holes is visible even by eye!

This shows the non-sequence stars - neutrons and black holes - within a 25 ly jump range: 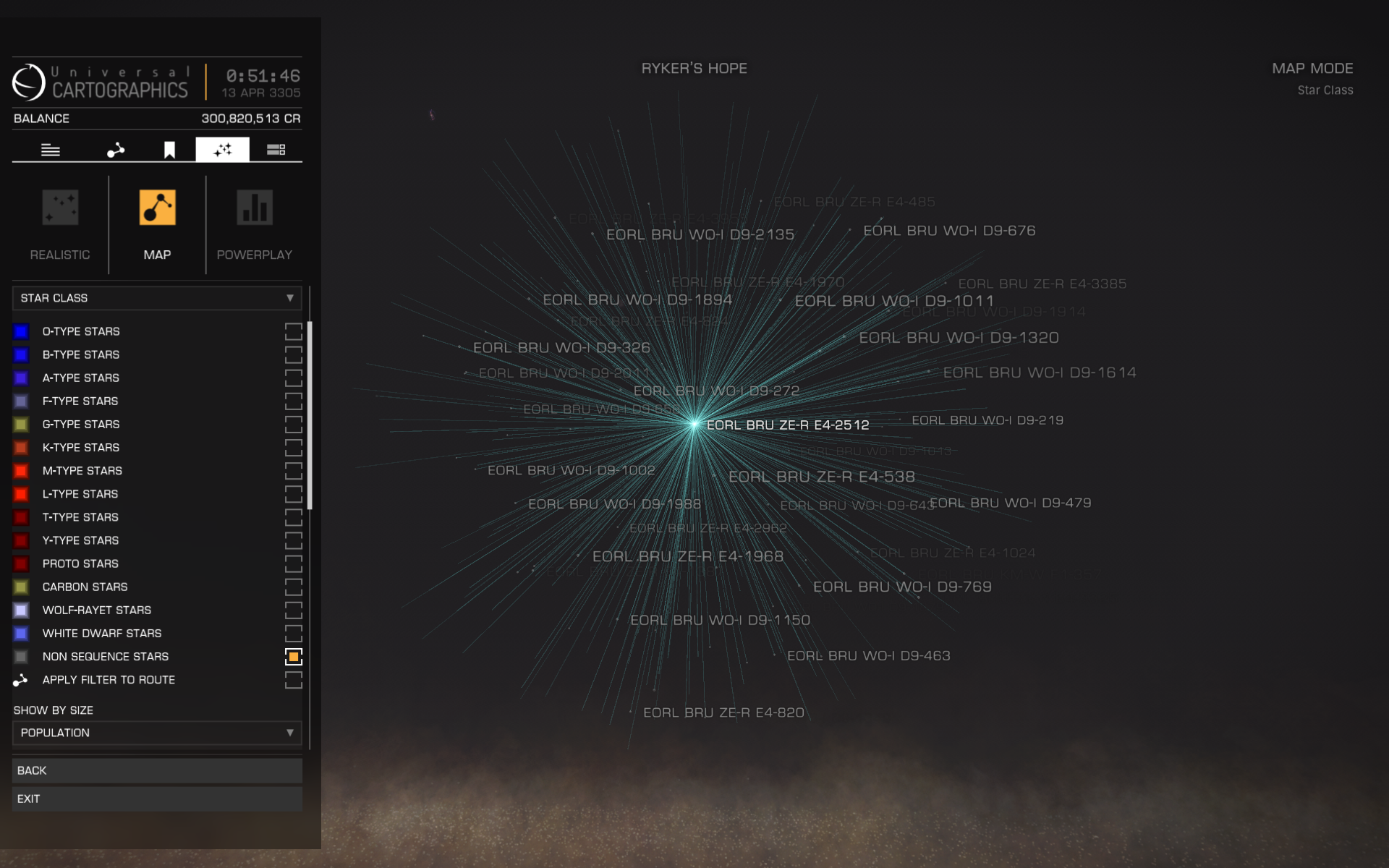 Unexplored as far as the eye can see. After getting a few heart attacks, and not believing that this has been catalogue before, I hereby christen this area as 'The Plain of Peculiarity'. 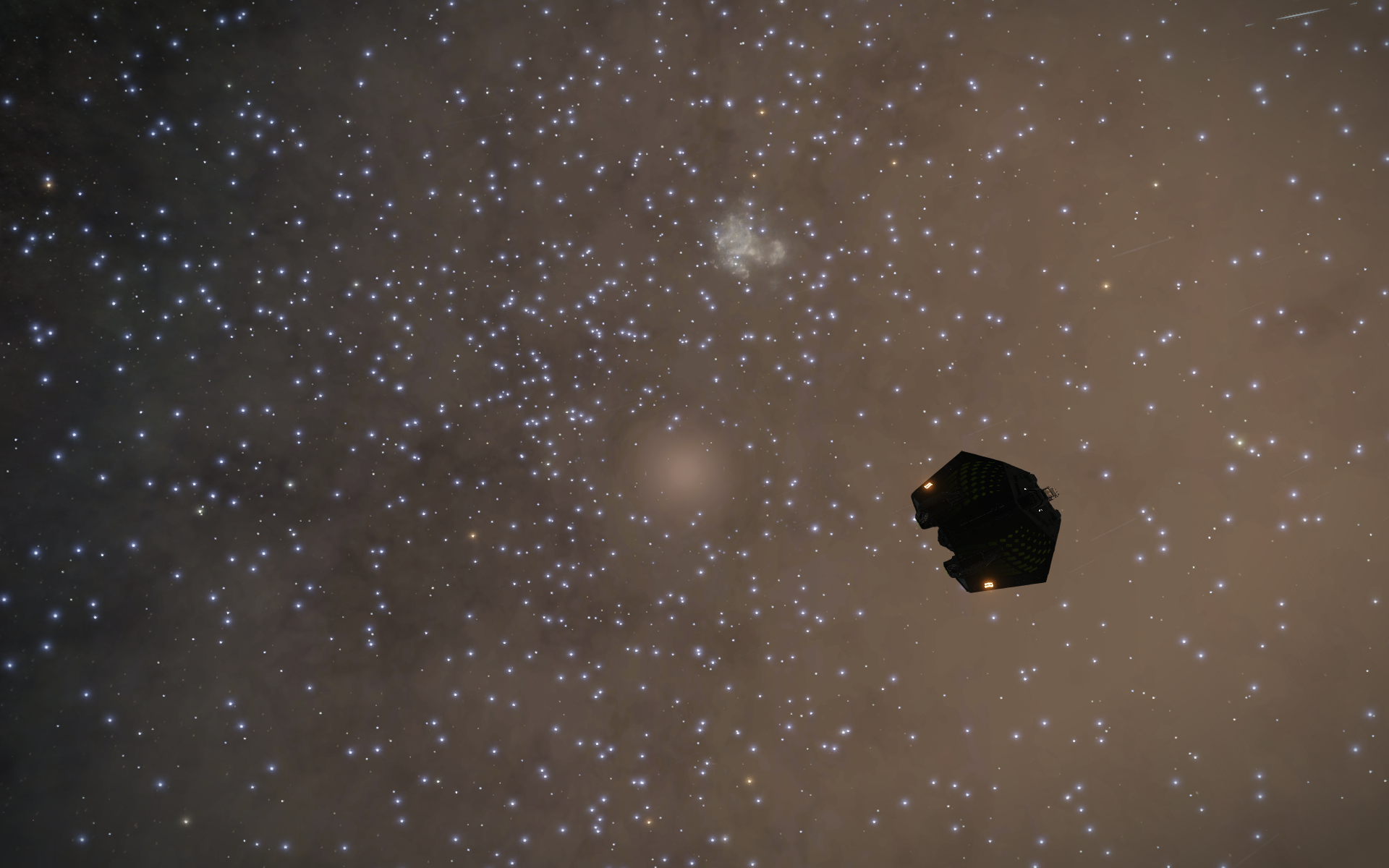 This one is my first submission, so hope it makes the grade, an unusually 'Dark Giant' Ringed Class III gas giant, that can almost seem transparent.

I thought it was interesting that everything in this system seems to be the smallest it can be.