This was actually noticed in the original DWE, and we decided it was the Devs having fun. I don't think we were ever supposed to notice it though 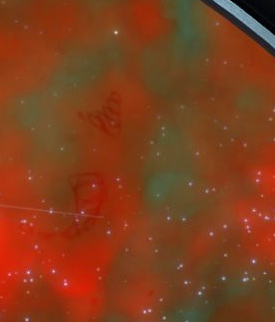 P
System: Croomoi LX-U f2-612
A system with a black hole and 6 neutron stars. 3 neutron stars are very close to the black hole primary. It might actually be dangerous to get in, I got a bit of FSD boost when I first jumped in, scary
It's between Sagitarius A* and Peak, so a nice stop when travelling between these. Distance is 2,706.58 ly from Explorer's Anchorage.

Rojo Habe said:
This was actually noticed in the original DWE, and we decided it was the Devs having fun. I don't think we were ever supposed to notice it though

It’s a message from Halsey’s Caretakers of the Galaxy!
It says
“Kilroy was ere” 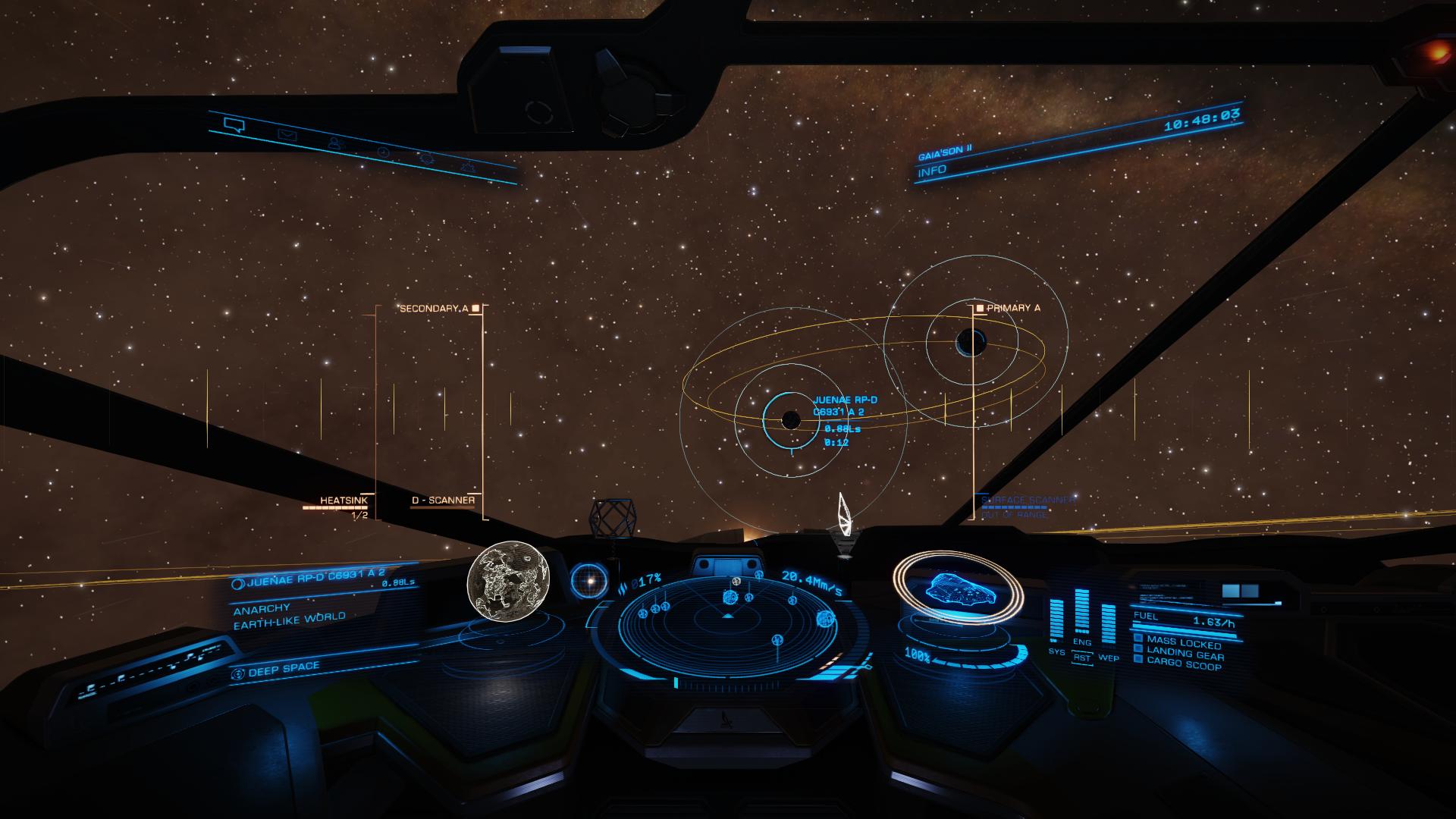 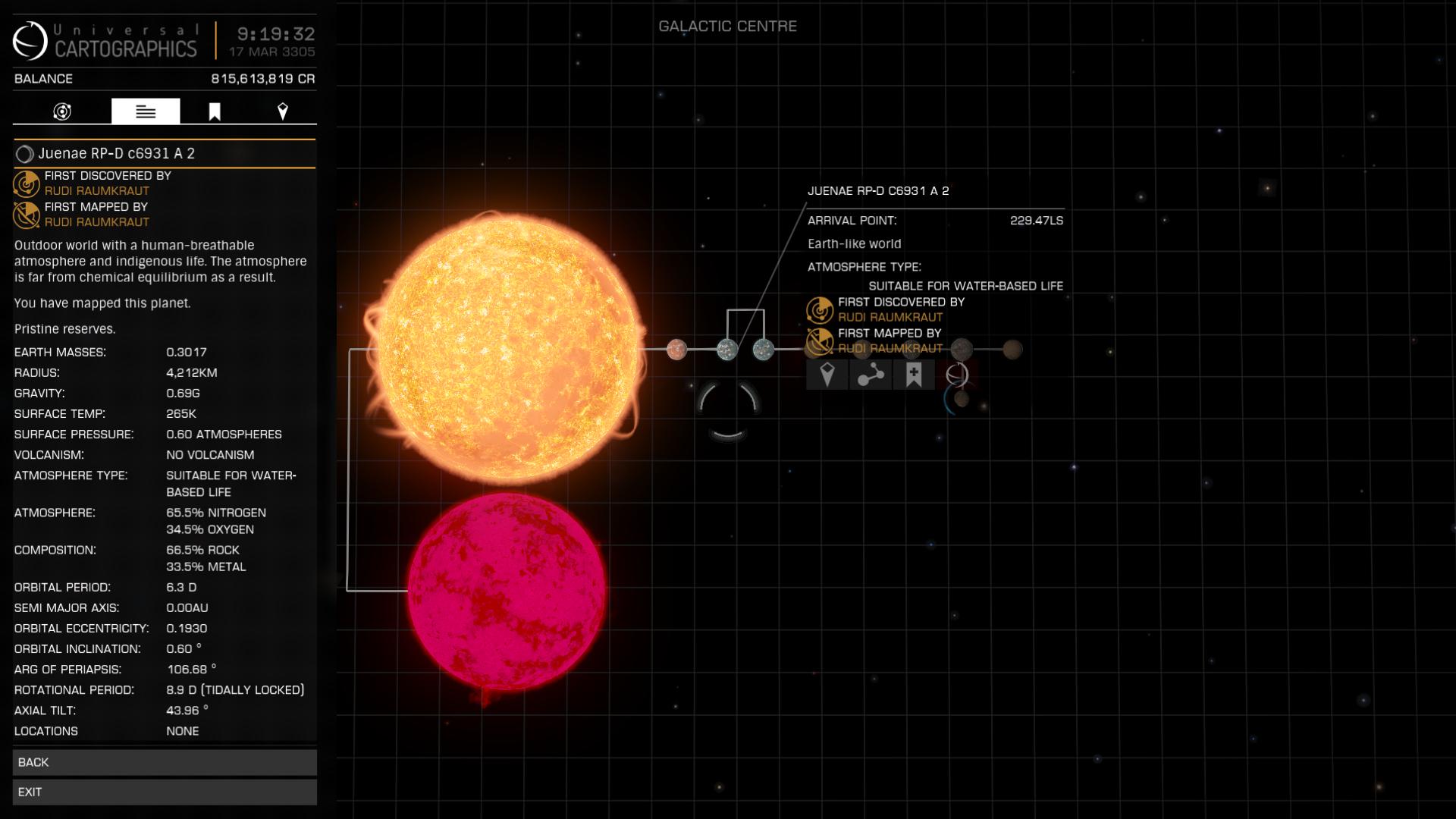 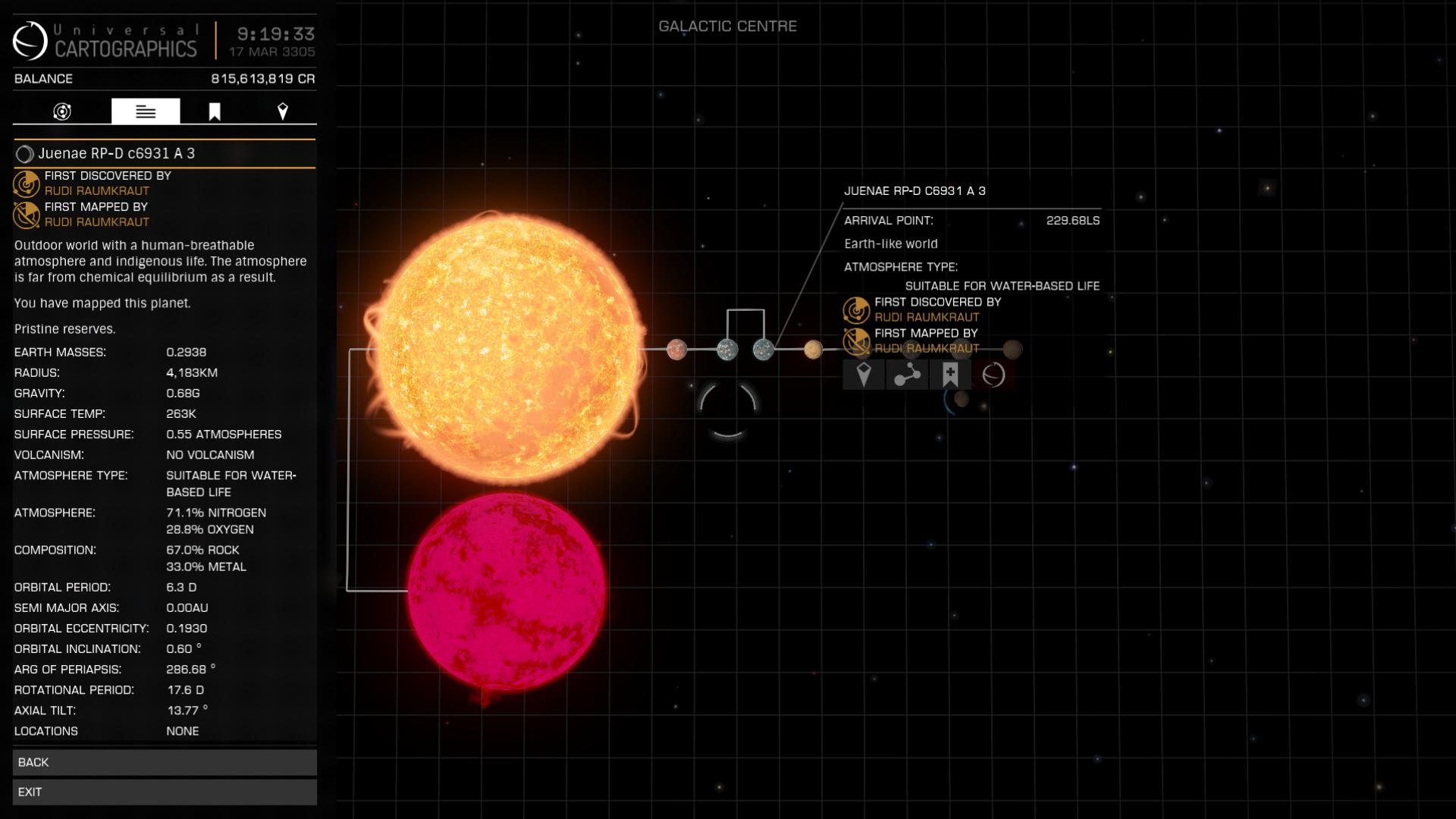 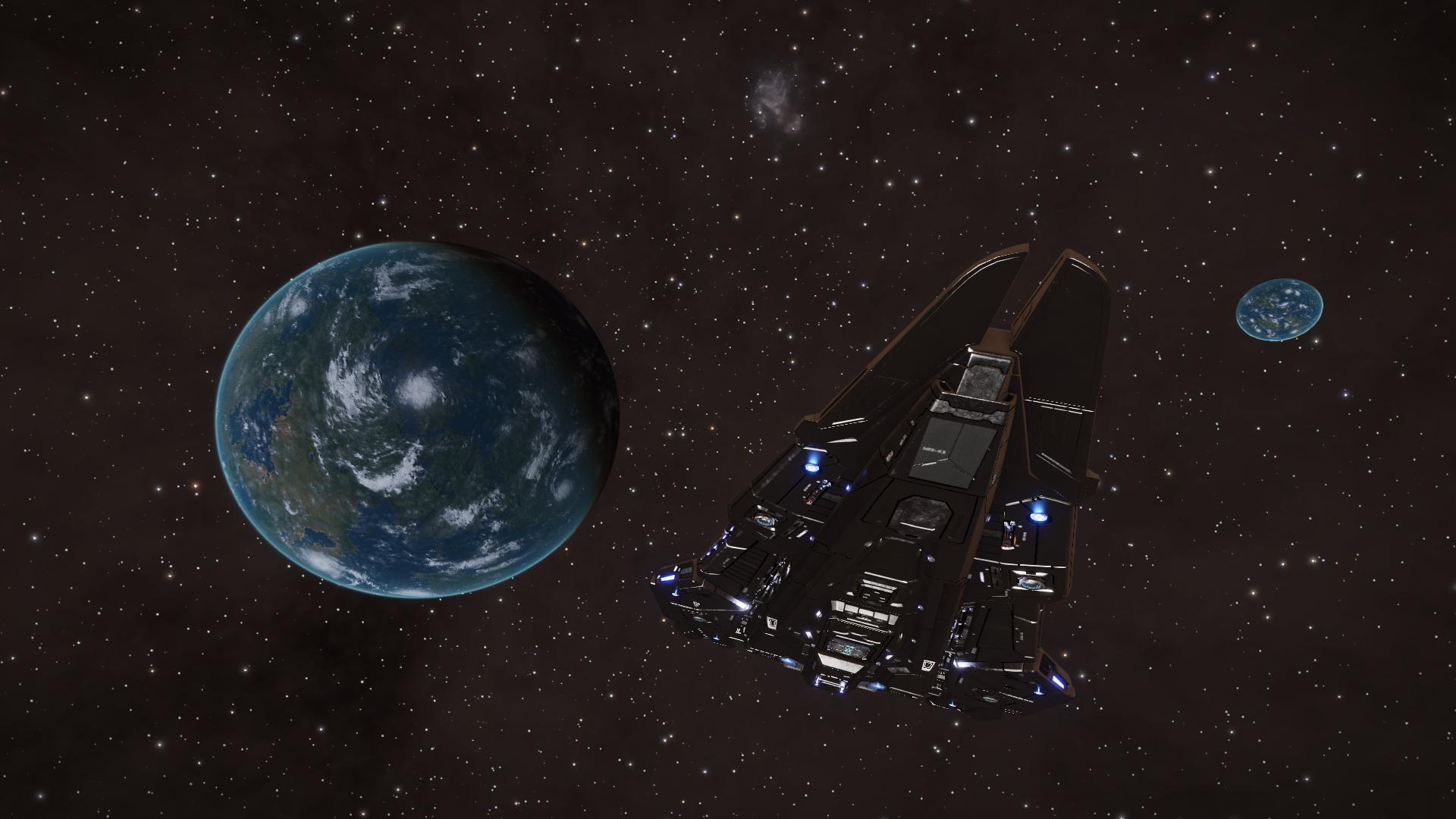 This system contains two terraformable water worlds in tight orbit around each other that are tidally locked. It might seem an mariner's delight, if a mariner were into extreme weather, and possibly not just for human mariners. The one planet has a breathable nitrogen/oxygen atmosphere, suitable for human life, particularly for sailors fond of arctic or antarctic weather back on Earth. The other planet would be an extreme tropical hothouse, but with an ammonia atmosphere. A bit too warm for Thargoid tastes, if Thargoids ever had mariner interests and suitably cooled sailing vessels perhaps a few might find this world an interesting stopping point. Given general Thargoid hostility to humans, the galaxy's first multi-species sailing competition is probably not going to happen any time soon but if it ever did, this might be the place for it. Rudi Raumkraut said:
Binary ELWs just ~0.3Ls apart from each other and only 510Ly "under" XA
Click to expand...

Wow, the tides must be murder on those worlds.

J
Lindigoticum and purpureum ice crystals - broken - inside of a proto-lagrange cloud.


So, I decided that after the CG I'd fly off and do some deep space exploration on my own, away from the fleet for a while. Therefor I'm out in the Formorian Frontier region right now, near the Abyssinial Hidden Paradise.

Anyway, out here I stumbled across a notable stellar phenomena in the form of a proto-lagrange cloud, in the system Cliewoae NT-F d12-0. Inside of the lagrange cloud, I found both purpureum and lindigoticum ice crystals. Nothing out of the ordinary... BUT, the thing that caught me off guard is that these ice crystals are all broken. I've never seen them broken before, and despite our best efforts I've never seen anyone as much as scratch the surface on these things.

And so the question is... did I find something new out here? I'm really not sure. 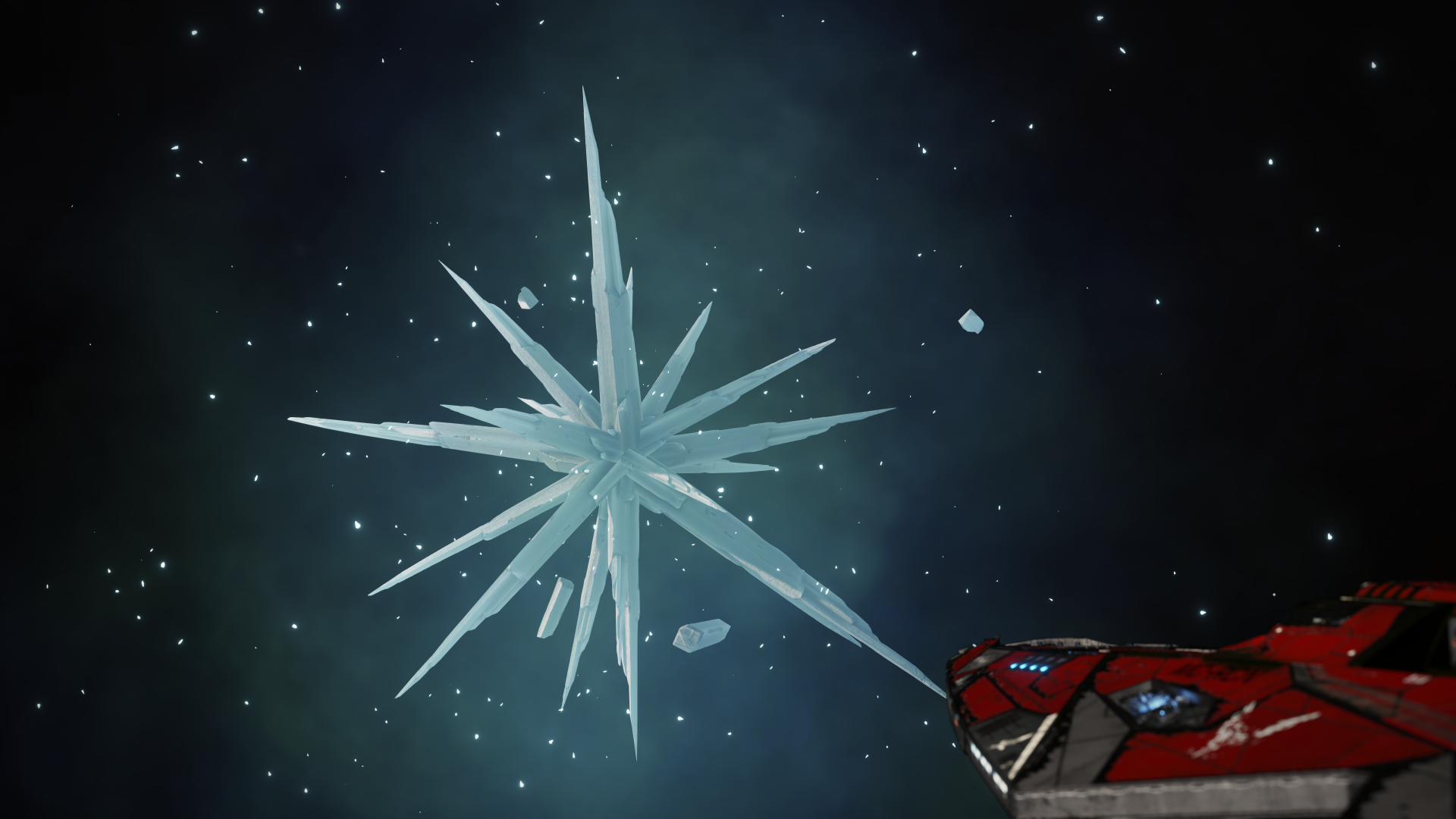 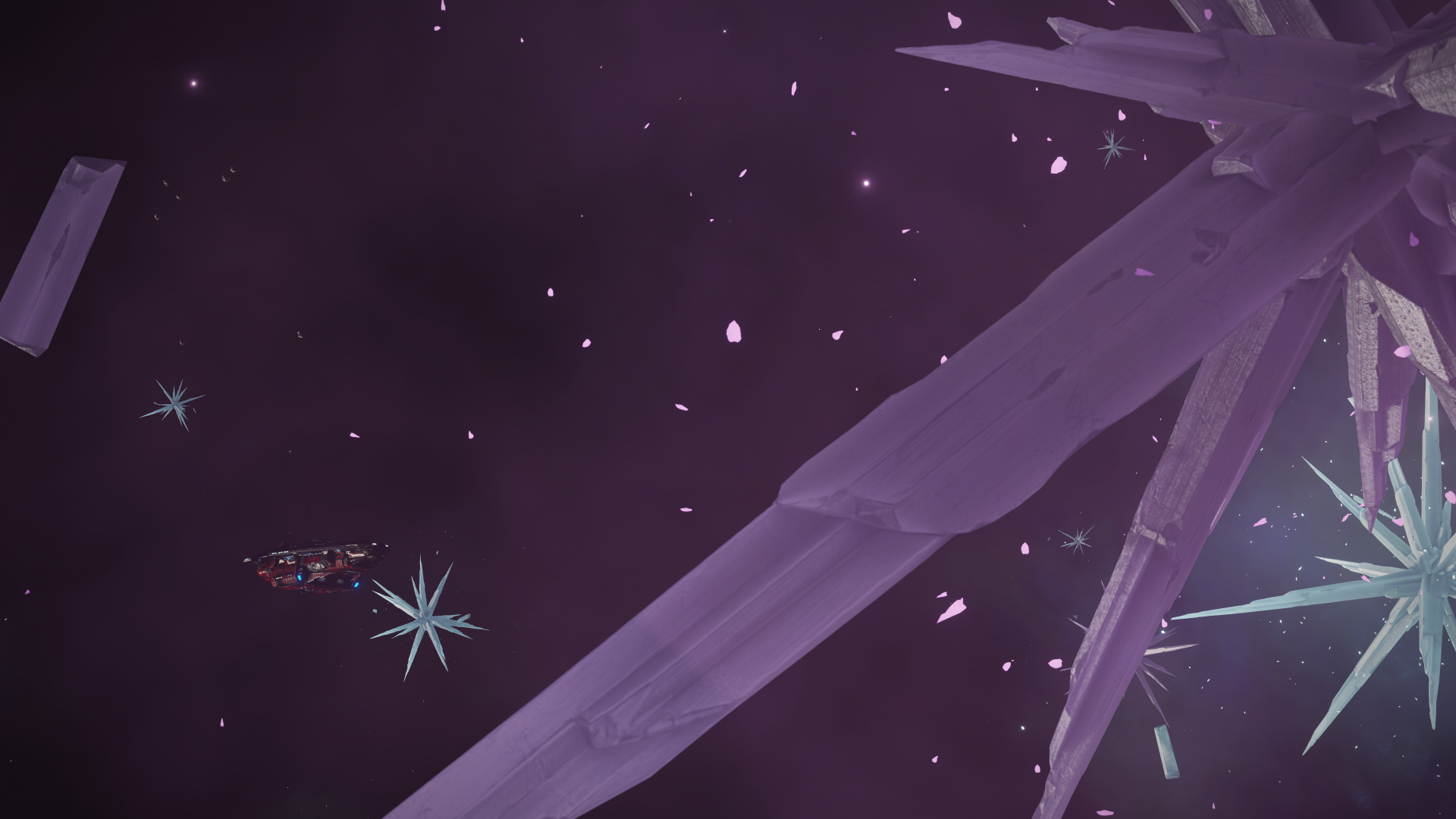 Unsure if the message in the #announcements channel was directed to me or not... [woah]

The NSP is actually listed in EDSM, one of the reasons I went to it before the first in-route checkpoint. 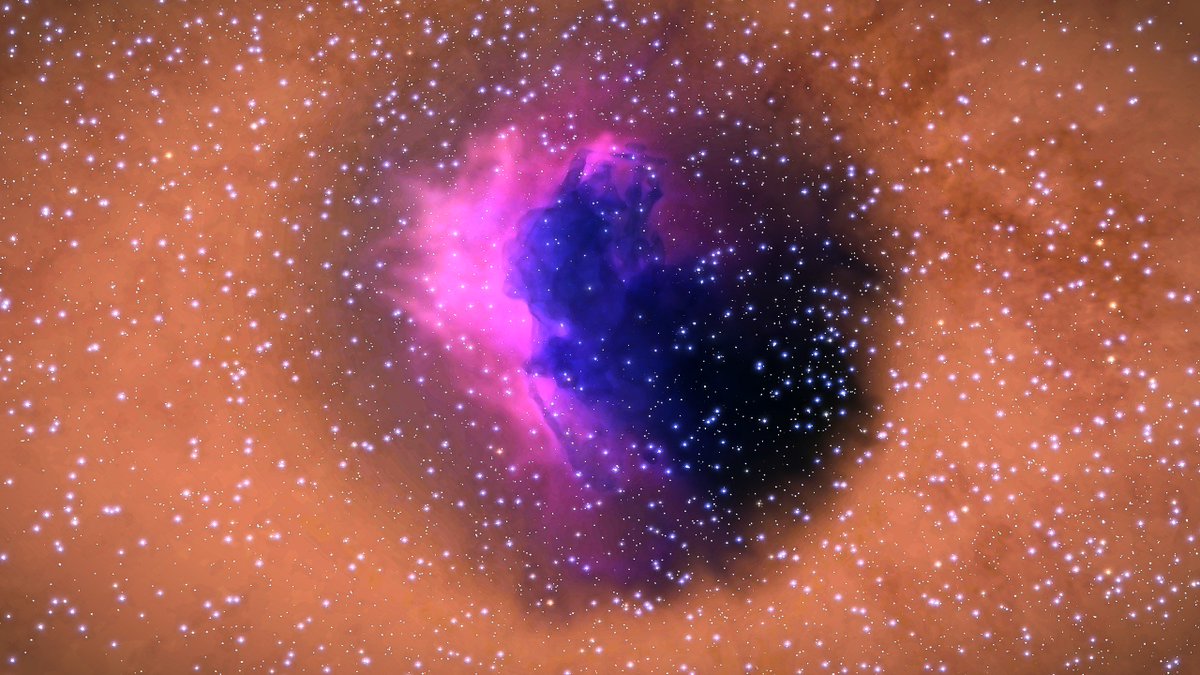 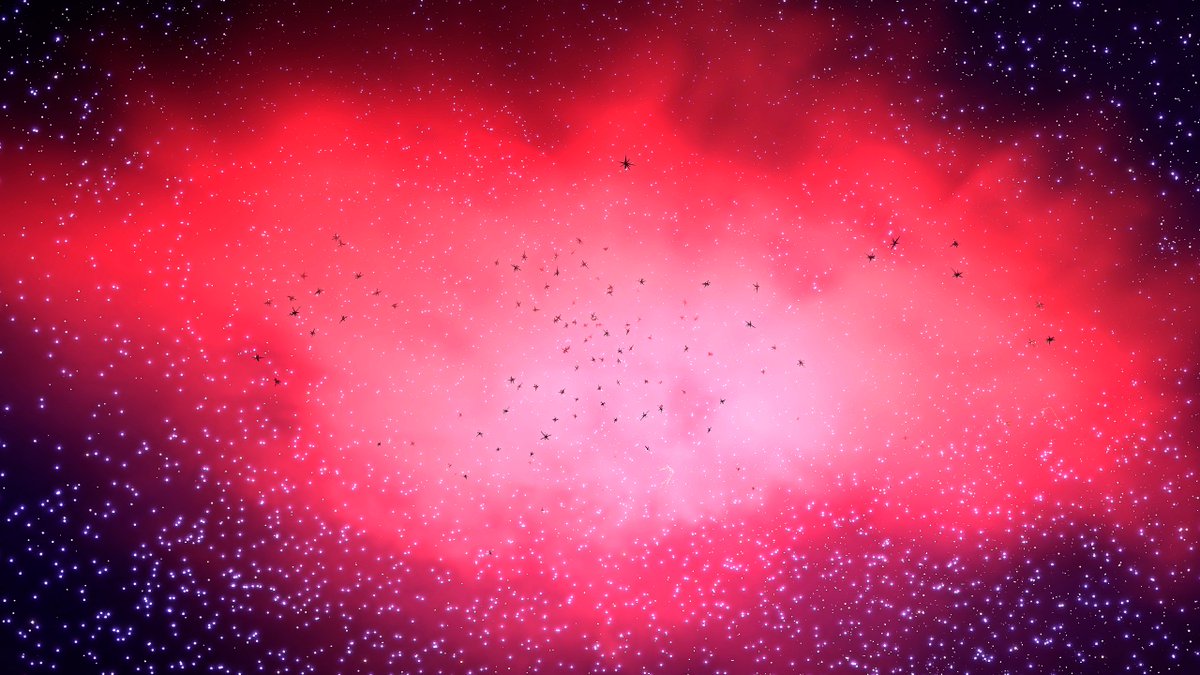 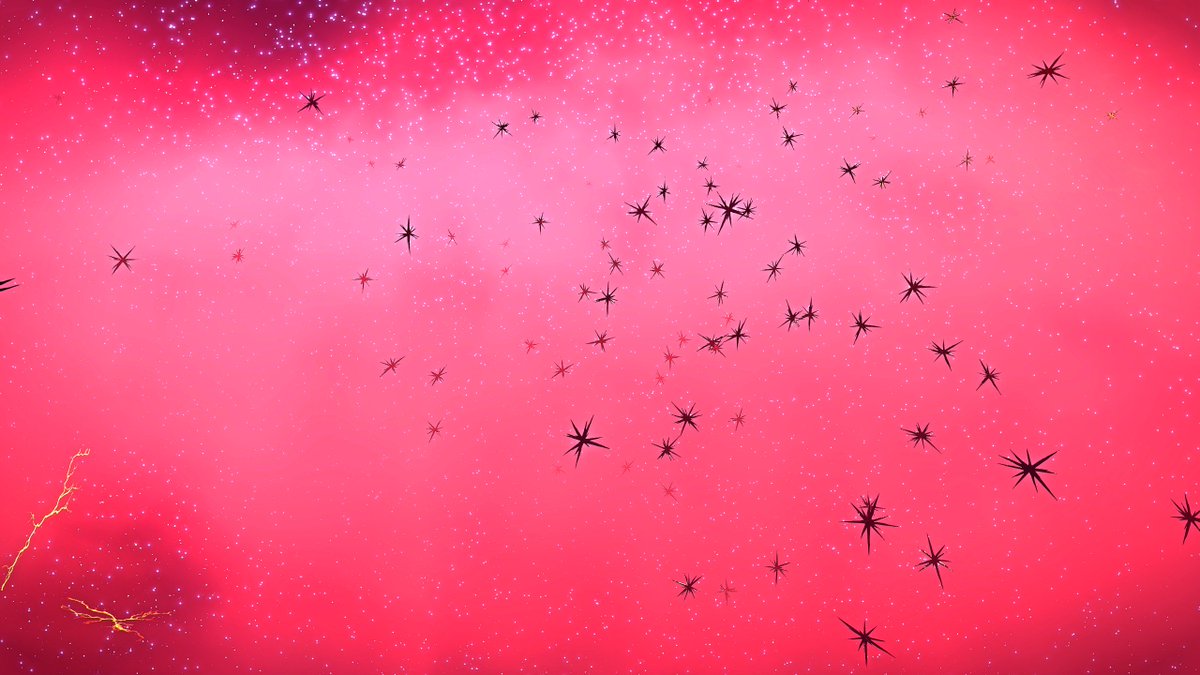 I visited Juenae OX-U e2-8852 on ‎February ‎22nd, when I was visiting all the cloud/anomaly codex entries. The Taipan picture was my submission for the WP6 photo contest.

Be sure to check out the L-01 type anomaly while you're there, and to enter the cloud with you're ship. I had to go back on March 14th because I didn't know how to find anomalies until someone showed me on Feb. 28th, and only entered the storm with my SLF which didn't scan the storm.

Here are all the pics I took during the first visit, along with the codex entries.

This landable High Metal Content planet is absolutely average by itself. However, what makes it unique is the view from its surface - just about 40 Ls away is a K class star along with a white dwarf companion. Additionally, the white dwarf has captured a Class V gas giant in an extremely tight orbit, much like the one at WP6 of the expedition. The planet itself rests at a safe distance from the stars, allowing it to spectate the show forever. 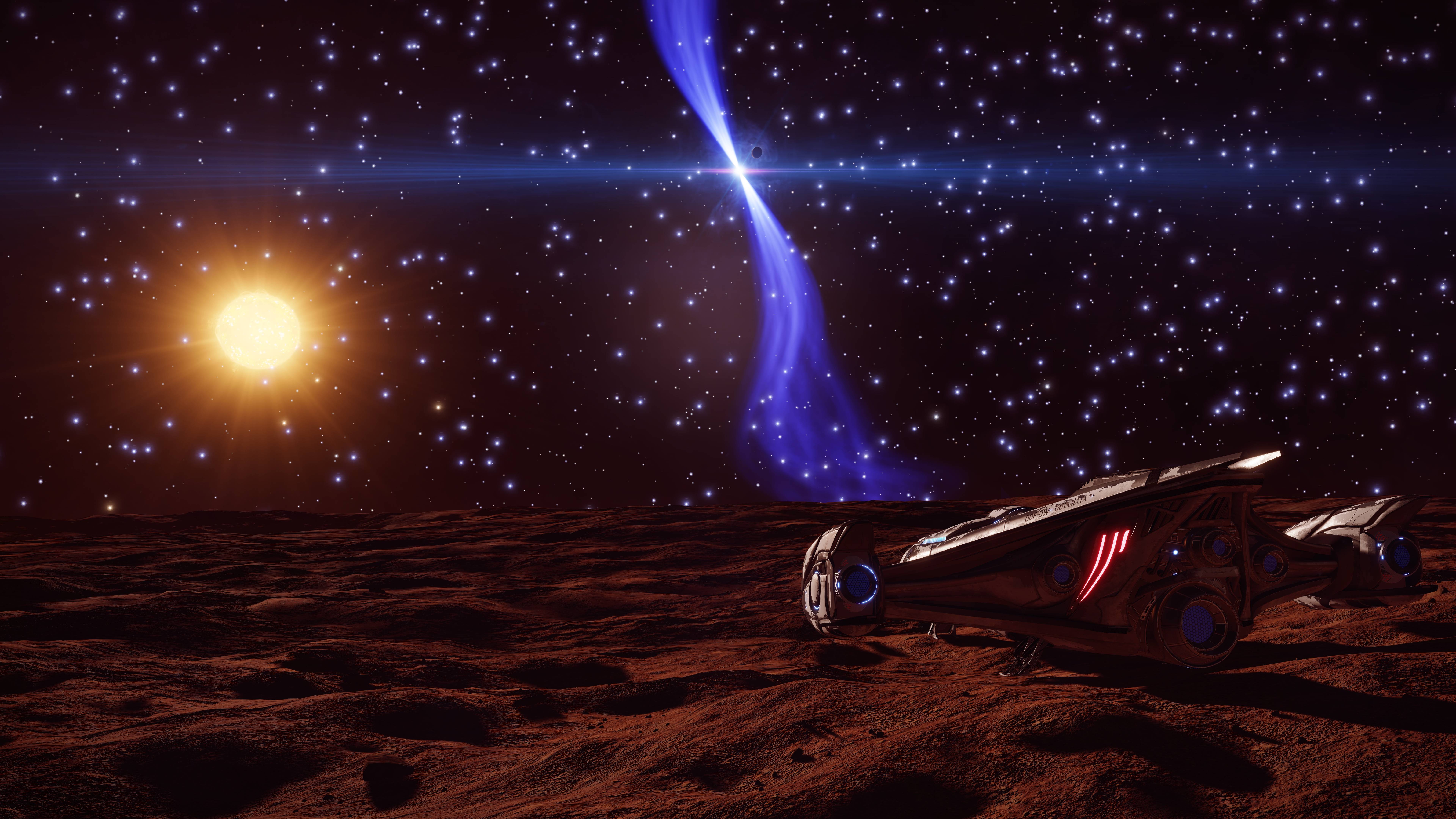 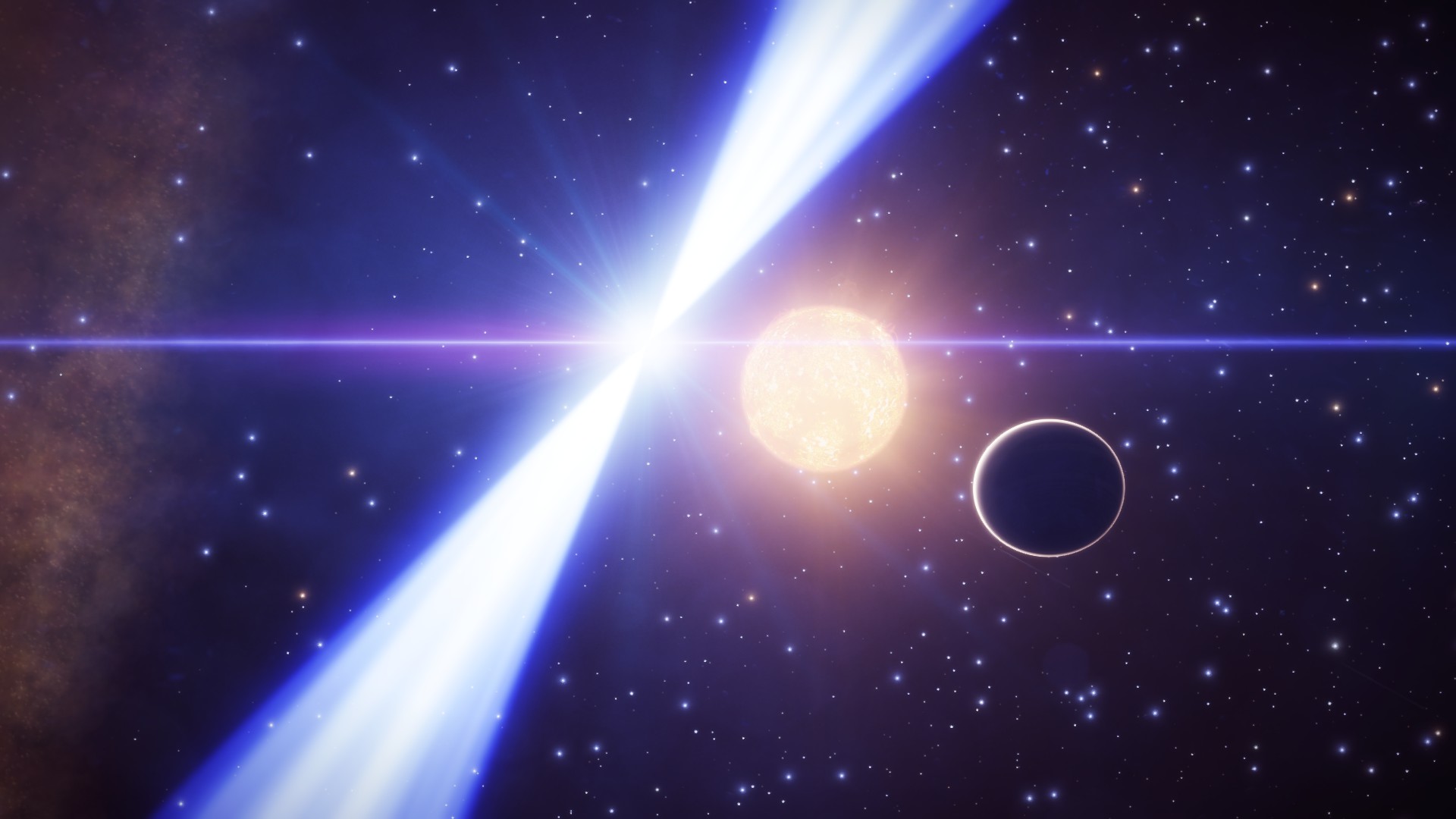 This system and this moon didn't look like much when scanning with the FSS. Just a few gas giants and some moons. However, I was looking for more jumponium mats along my journey, so I headed over to this moon because it had polonium and geosites. The first geosite wasn't anything particularly special. I collected all the mats I could and moved on to the next one. I flew there in regular space rather than supercruise and just let it fly for a bit while I grabbed myself a snack and a drink, and I'm glad I didn't go into supercruise, because I got to slowly approach this large canyon like this. 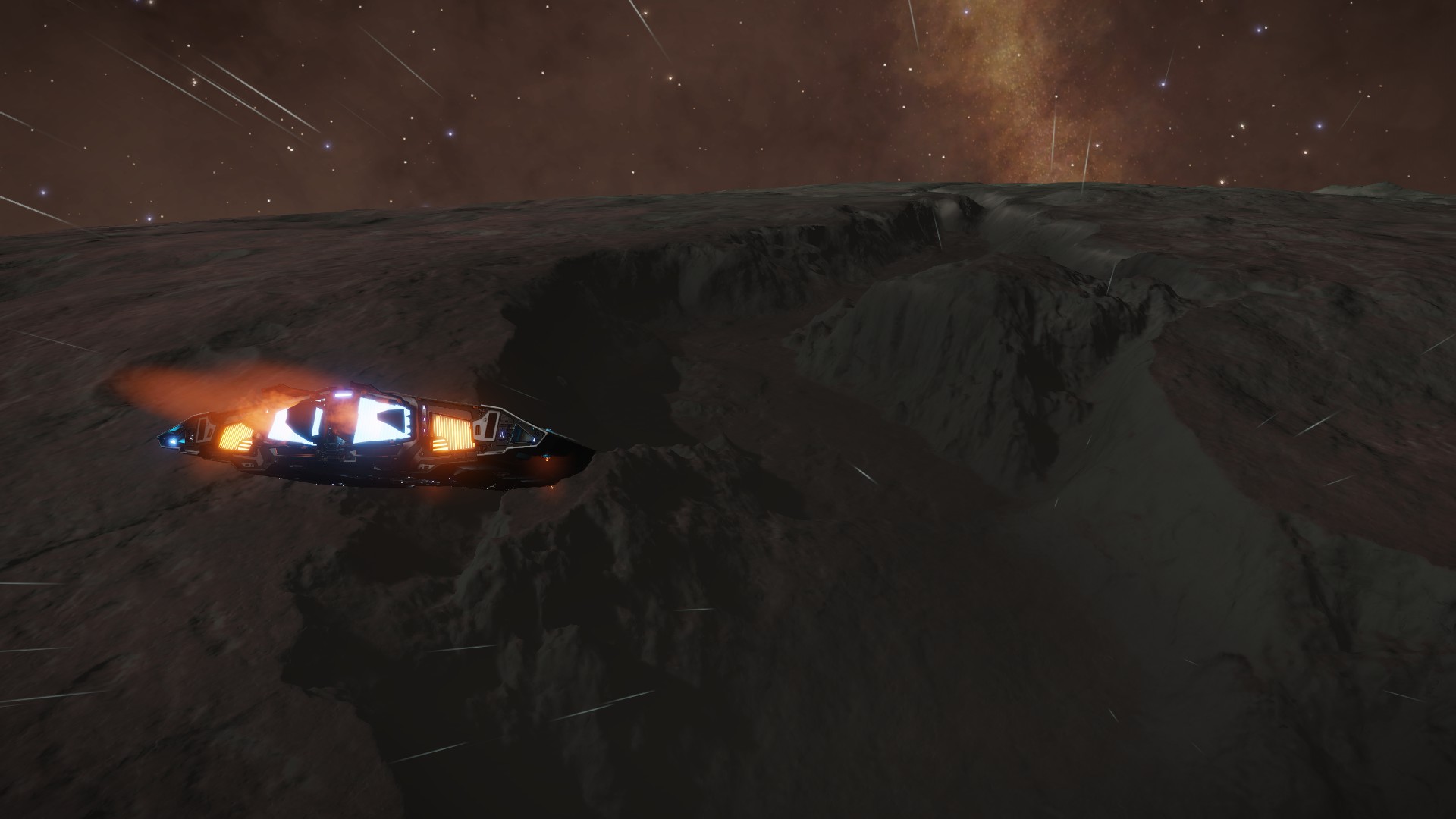 The views from down there were pretty nice, especially with the gas giant low in the sky. The shadow cast by the massive cliffs (Well over 1km high) covered many of the silicate magma lava spouts, allowing their glow to dot the dark landscape. 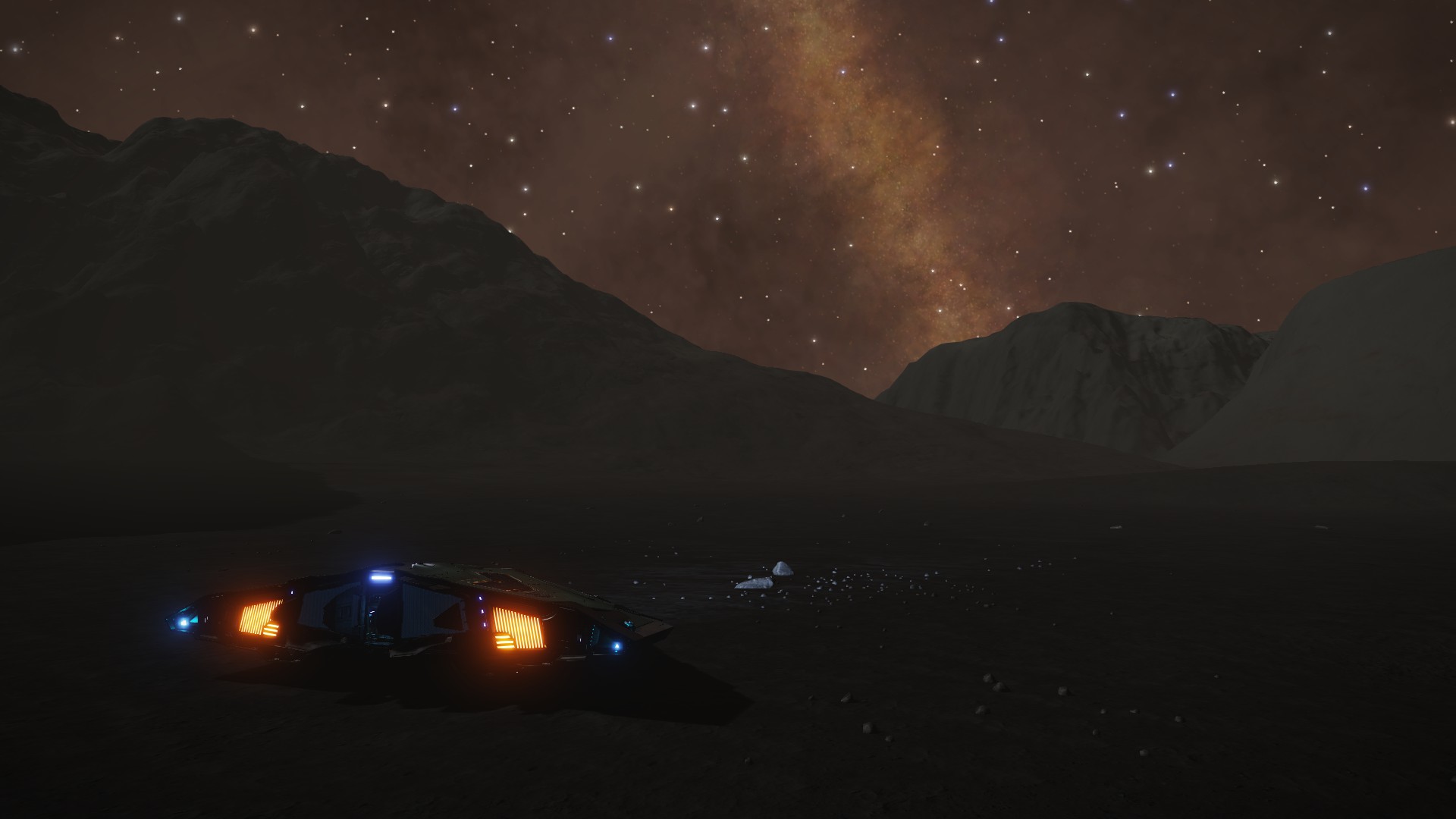 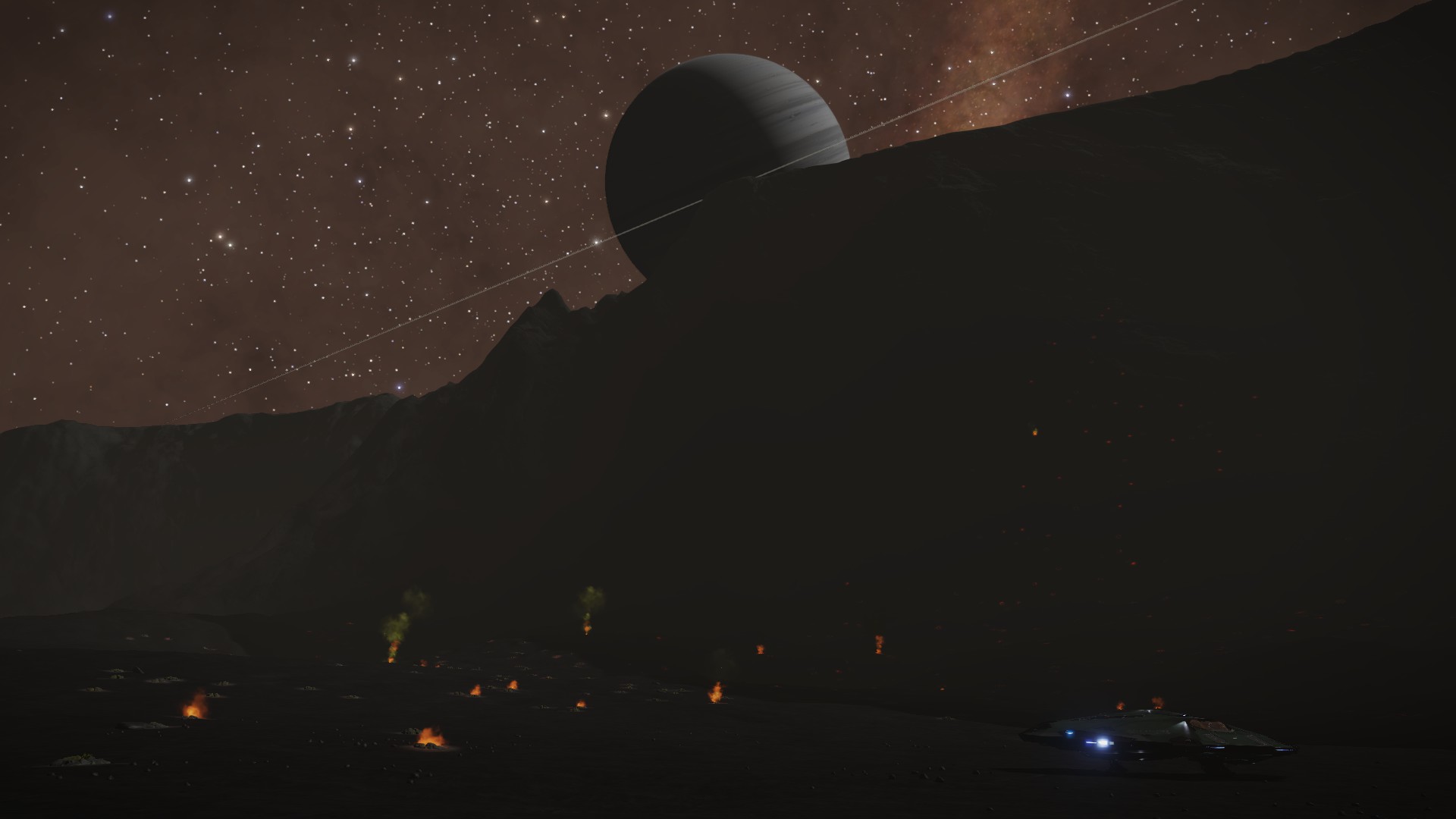 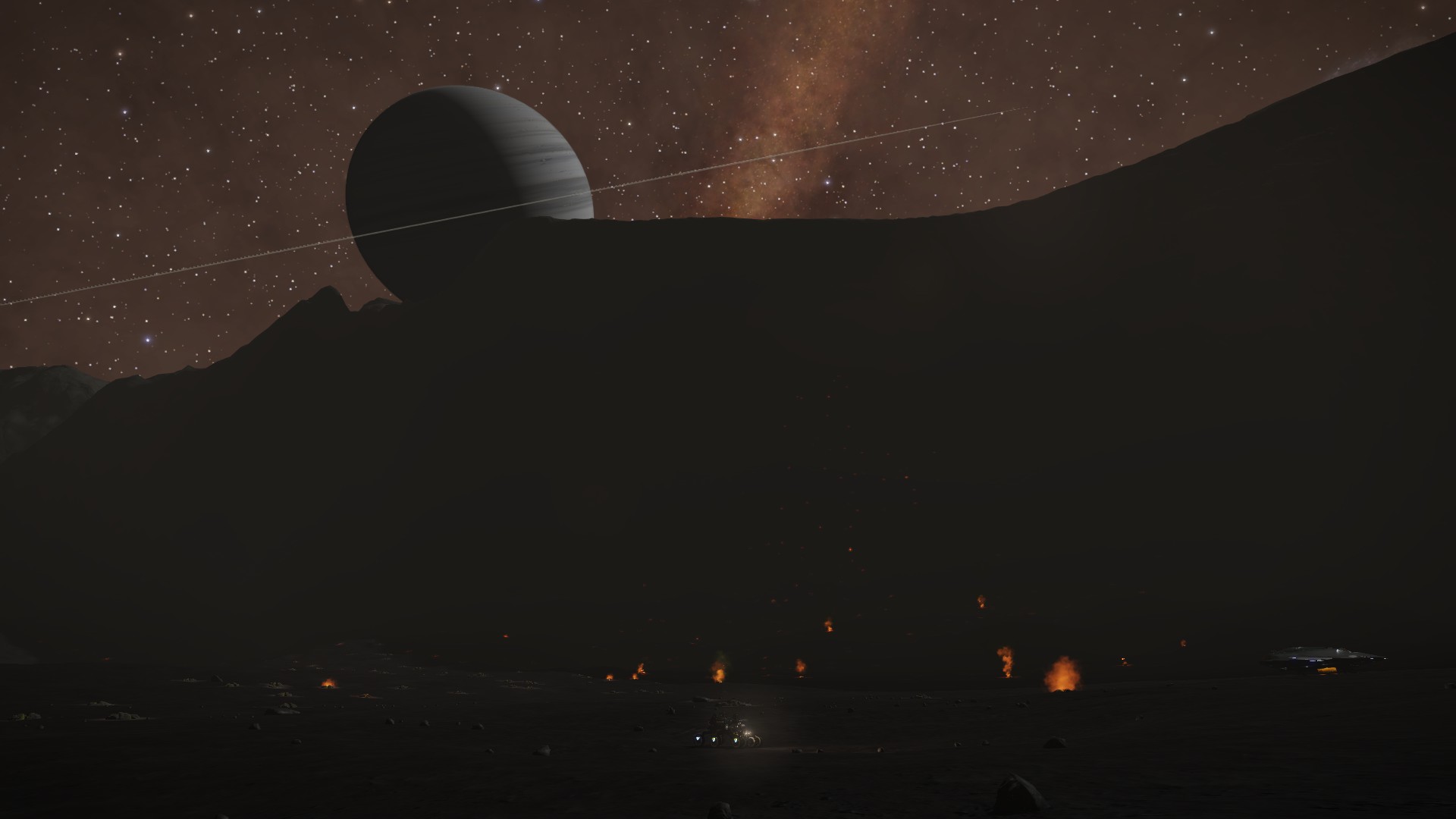 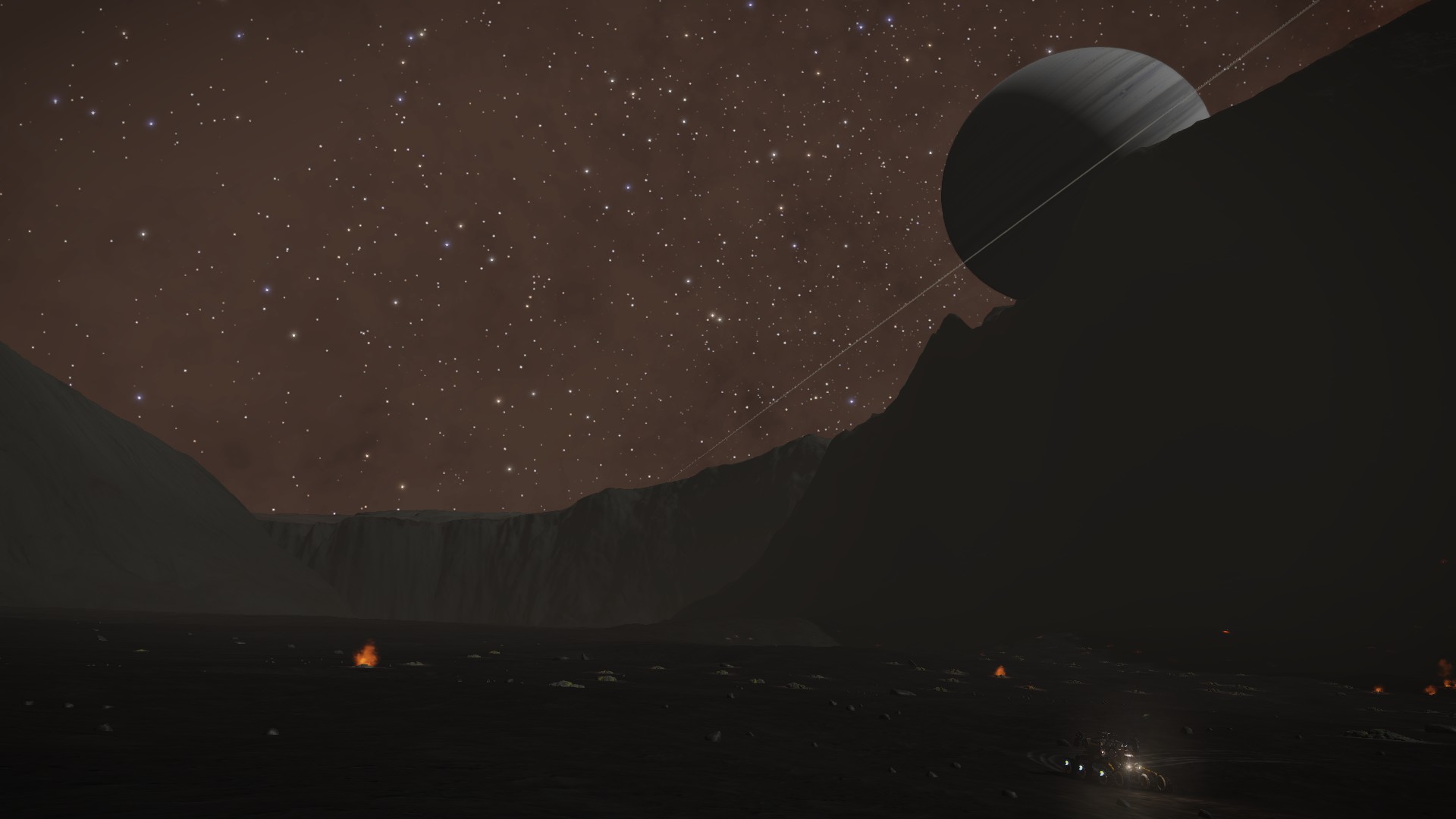 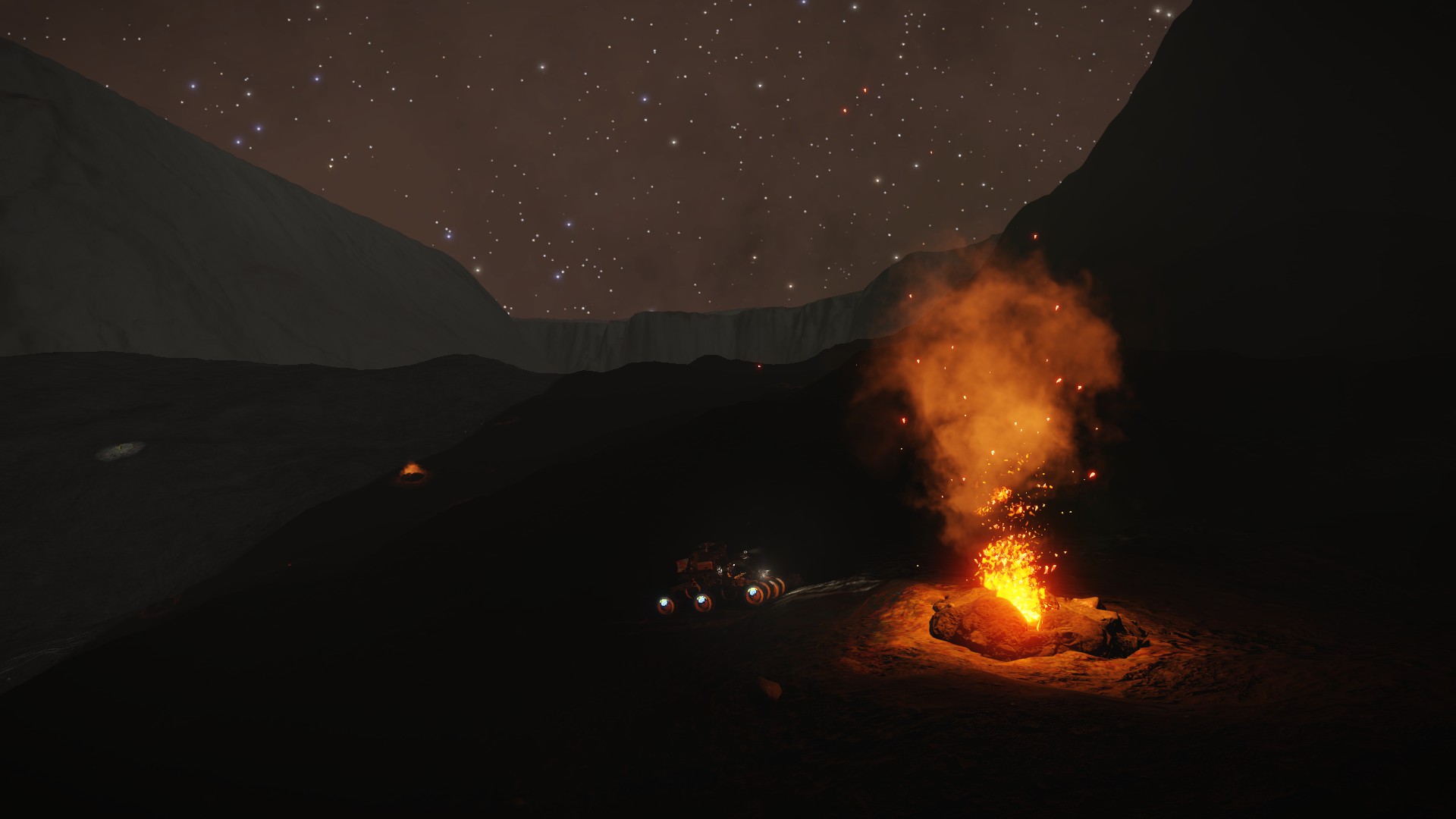 There's plenty of room in the bottom of that canyon to move around to get different views of the gas giant in relation to the cliffs. 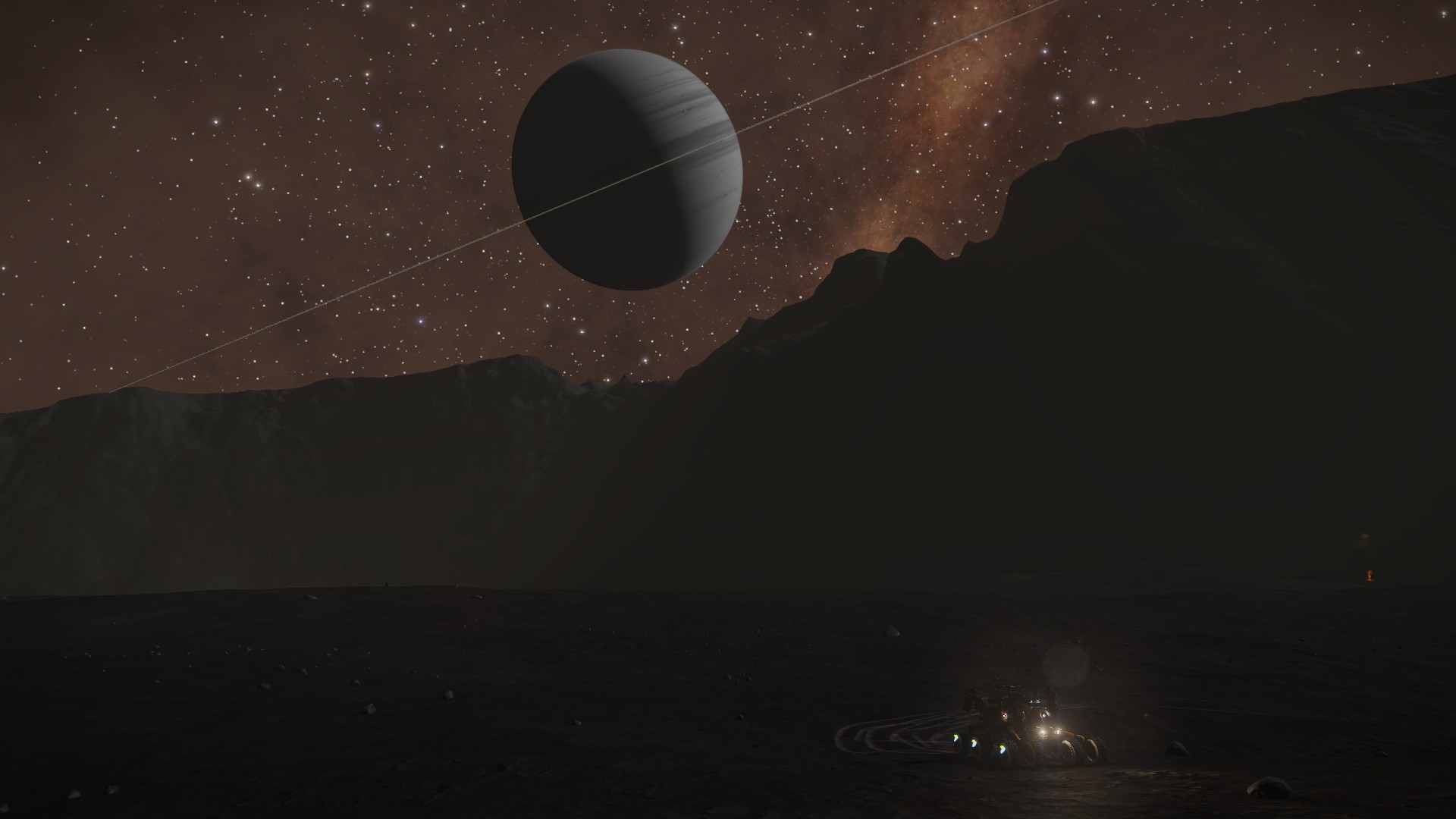 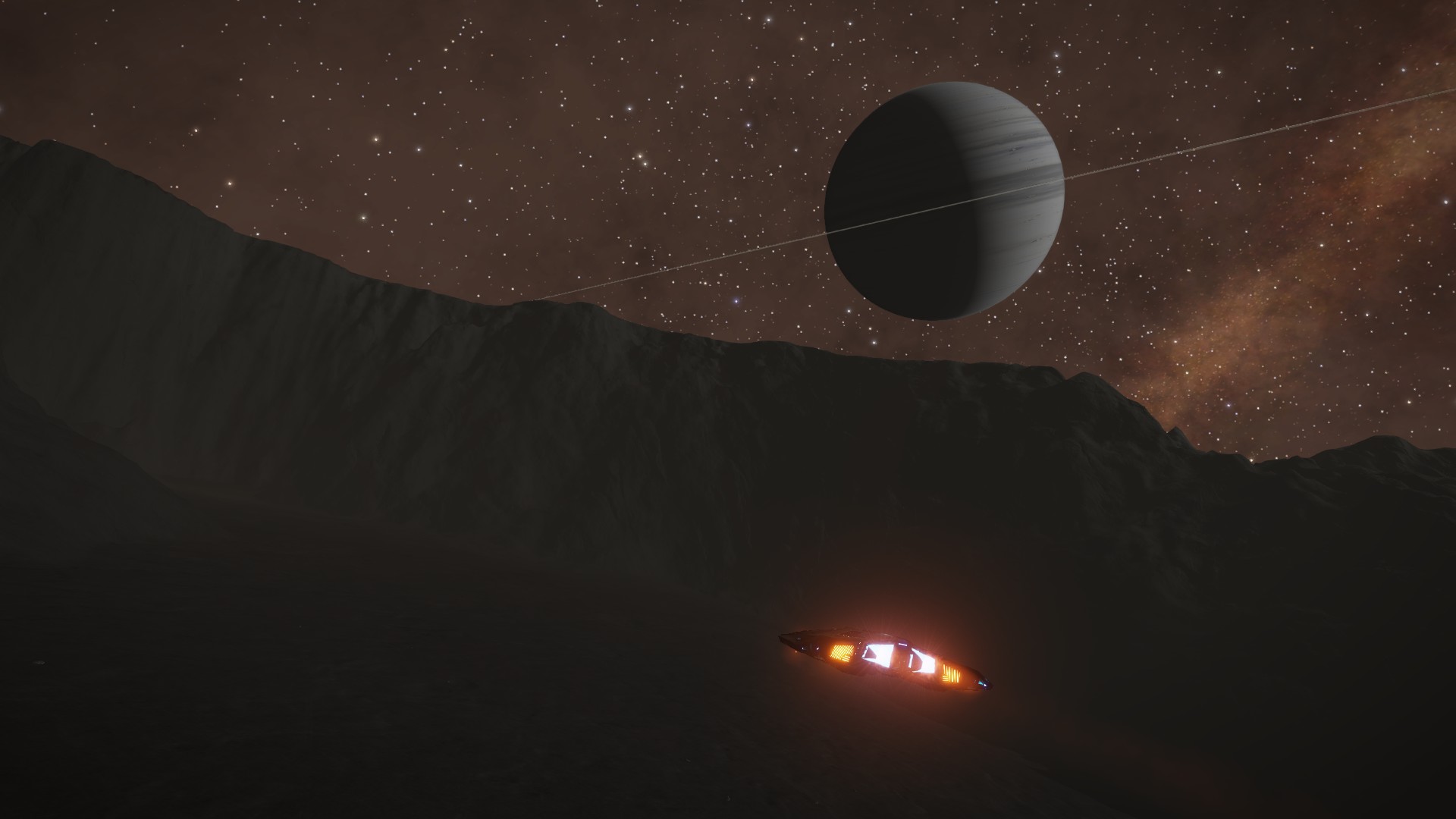 There's a ton of flat space to get your SRV up to top speed and a little ways away from the geosite is this "dish" in the ground that is perfect for jumping and flying an SRV (note my tire tracks). 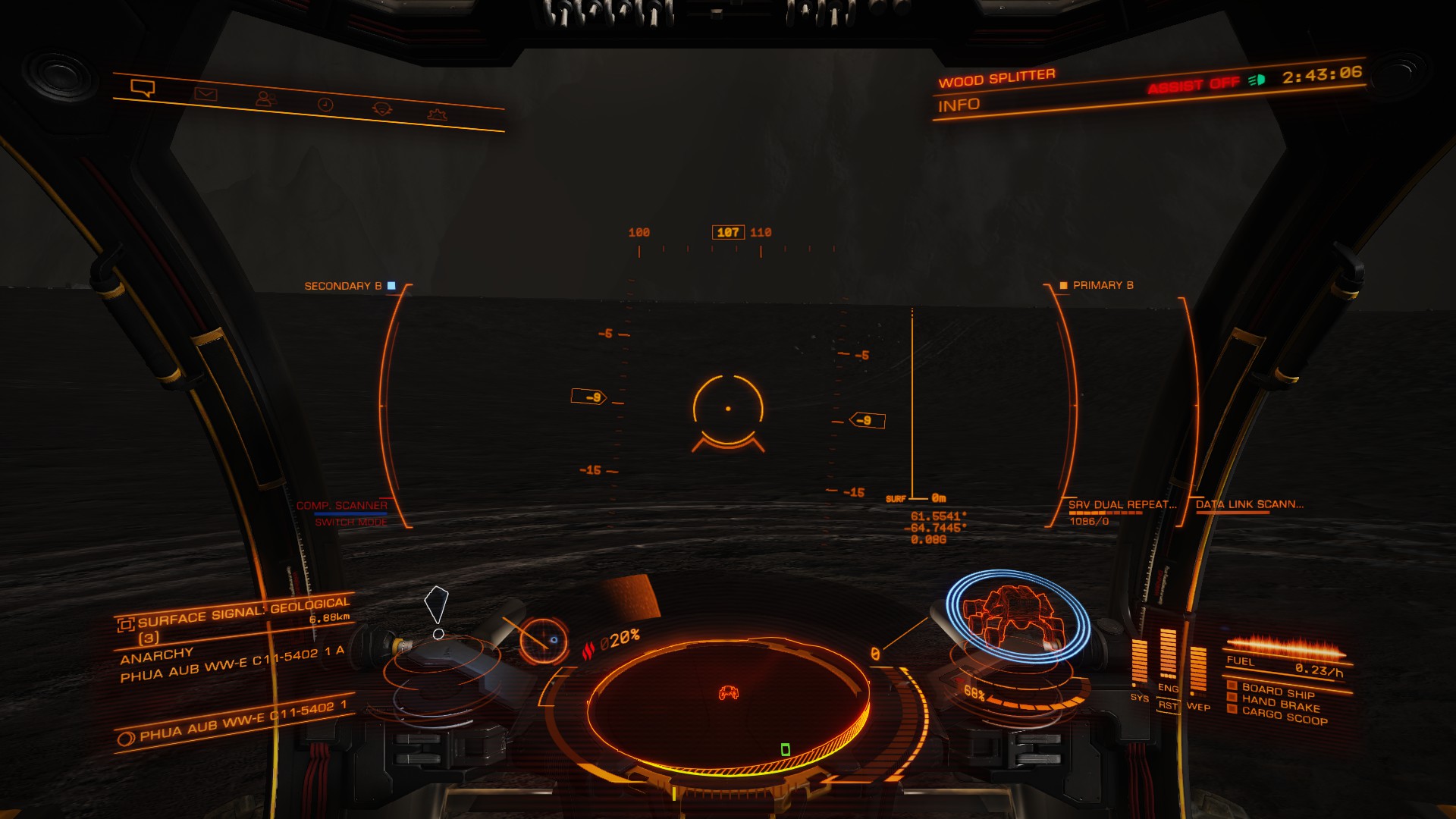 This is also a good place to get germanium, niobium, and polonium if you are in need of those jumponium mats.

I knew something was up when I fired up the FSS scanner... and this pair persisted in shooting off the screen at high velocity.

A pair of high-content mineral worlds in a scarily close binary orbit. it's around 1500KM from one planetary surface to another, so flying between the two, the altimeter never vanishes.

It's a foregone conclusion that the forces at work here will eventually result in a collision, but for the moment, the spinning ballet is quite beautiful. 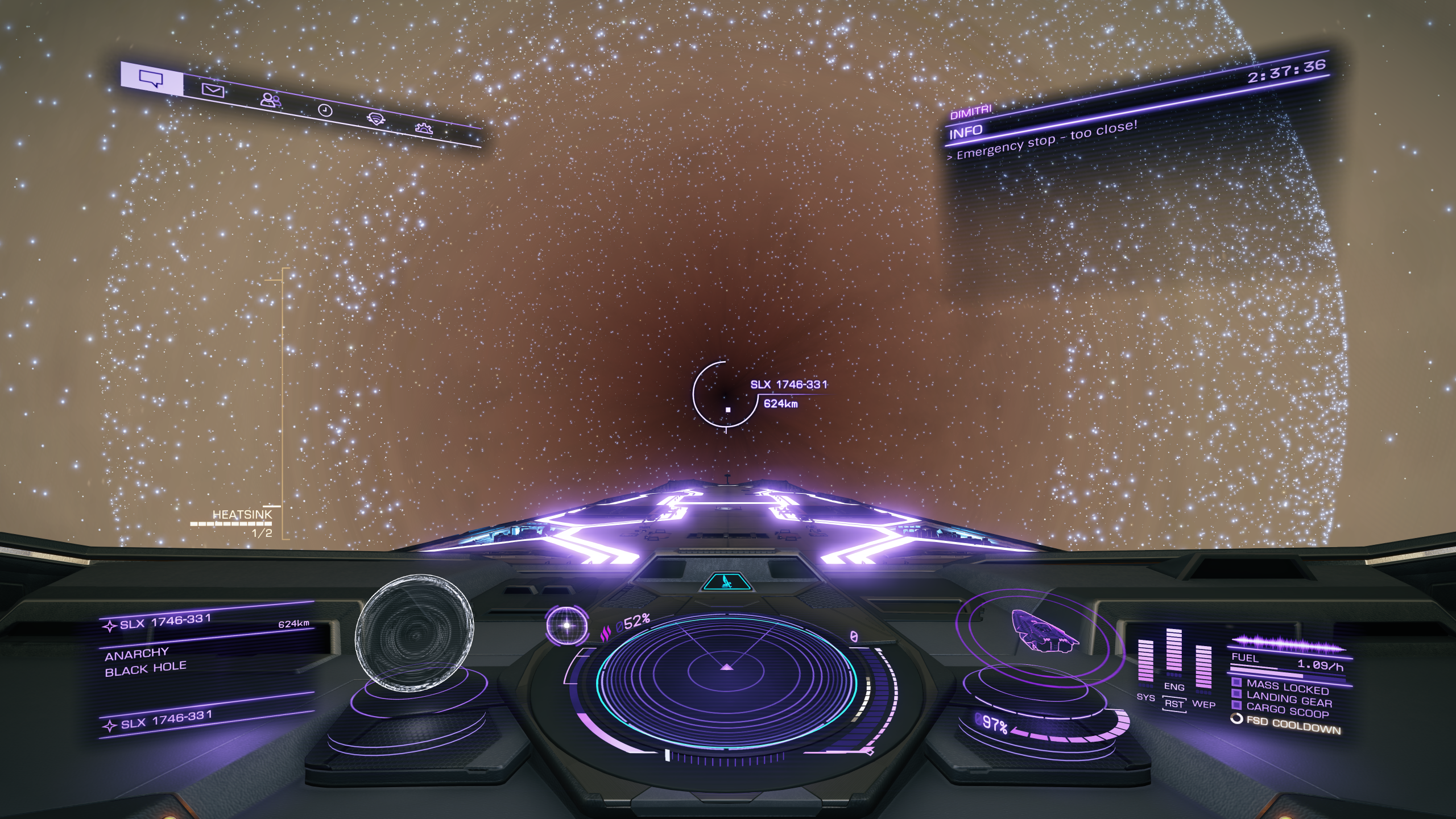 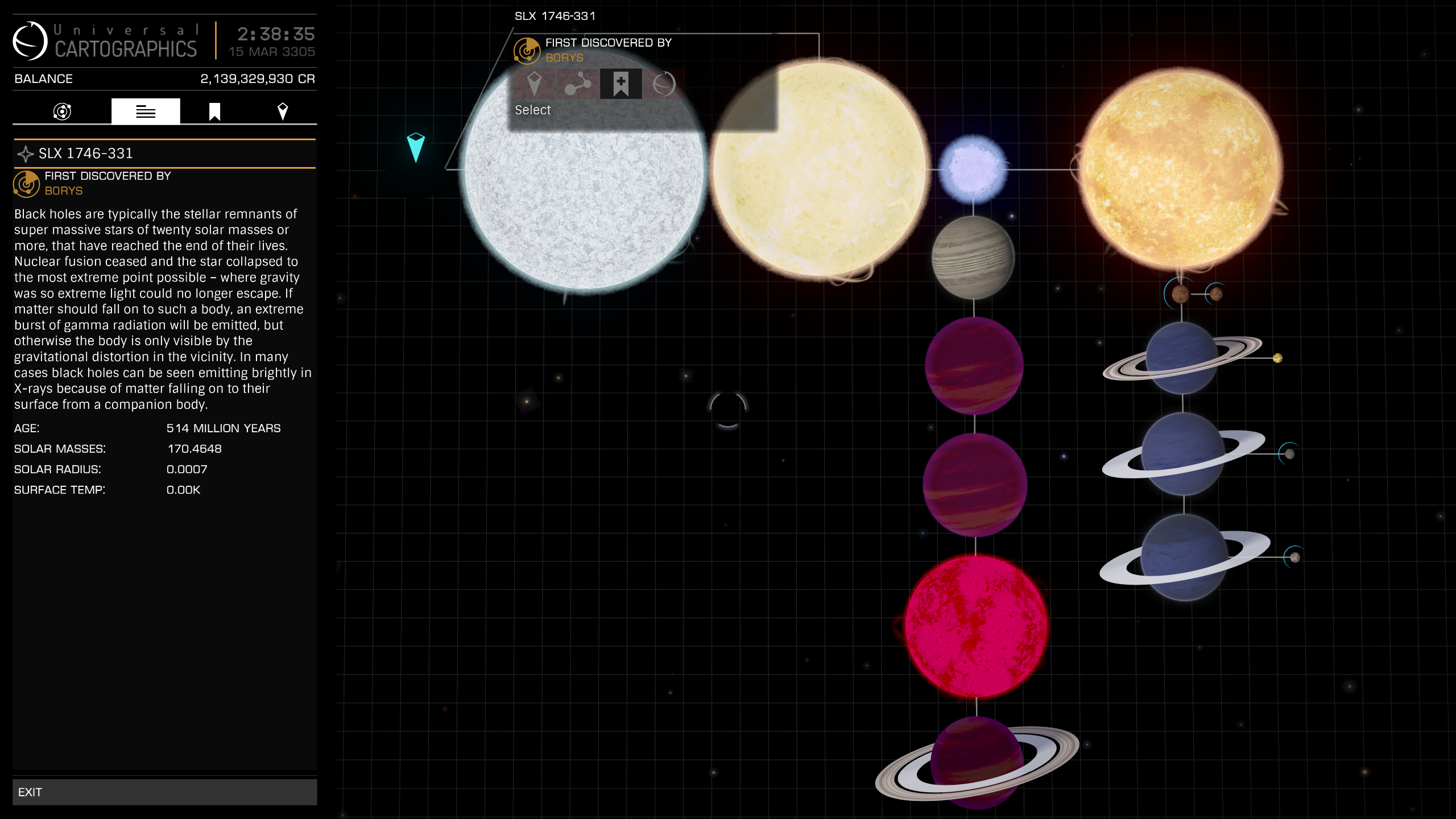 This is a system that I found a cute little planet that had a heart on it. I think it's worth making into a POI just because I have never seen anything quite like this. I stumbled upon this right a couple jumps away from Silver Highway POI.

Above Sag. A* lies a lone system with nothing but a Herbig AE/BE star and a bright blue T Tauri star.

Perhaps it should be renamed (At least unofficially). It's a very special place with a great view of the Milky Way below.

This is a system that I found a cute little planet that had a heart on it. I think it's worth making into a POI just because I have never seen anything quite like this. I stumbled upon this right a couple jumps away from Silver Highway POI.

A jumponium top-up on the way to Goliath's Rest if you skipped the polonium fields (like i did). Dryuae Chruia WK-E c28-238.

I'm hiding the name of the system this time, because I really want to log it first, and much time may happen before that.

This neutron star system has a water world that literally has "No Atmosphere". The most curious thing here, apart of that, is how that happens if it contains water-based chemistry and carbon-water-based life. HAving no atmosphere gives it also a nice looking matte blue tone. 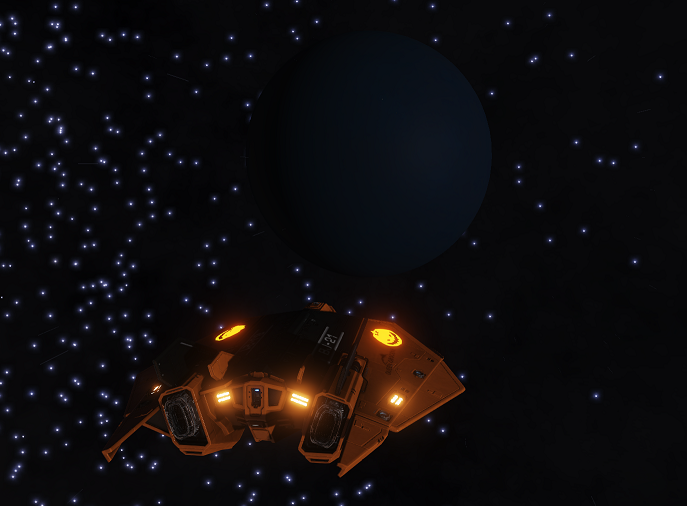 What struck me originally was how many of the non-gas giants had rings: 4 primary planets plus one moon. Maybe not the most impressive thing in the world but I had never seen that many before. D
I ran into this on my way back to the bubble, and it drew my attention because I jumped in and immediately got "system fully scanned: 6 bodies".

Name: Rings of Light
Game map search ref: Froarks PK-I c25-37
Description: A pair of ringed high metal content worlds a scant 24 lightseconds from the parent star. Planet 1 is landable with silicate volcanism. From geo site 3 on planet 1, one can see the planet's rings arcing across the horizon, the companion planet, and the nearby Froarks AA-A H22 nebula. WARNING: Planetary gravity on 1 is 2.7G.
Screenshot reference: 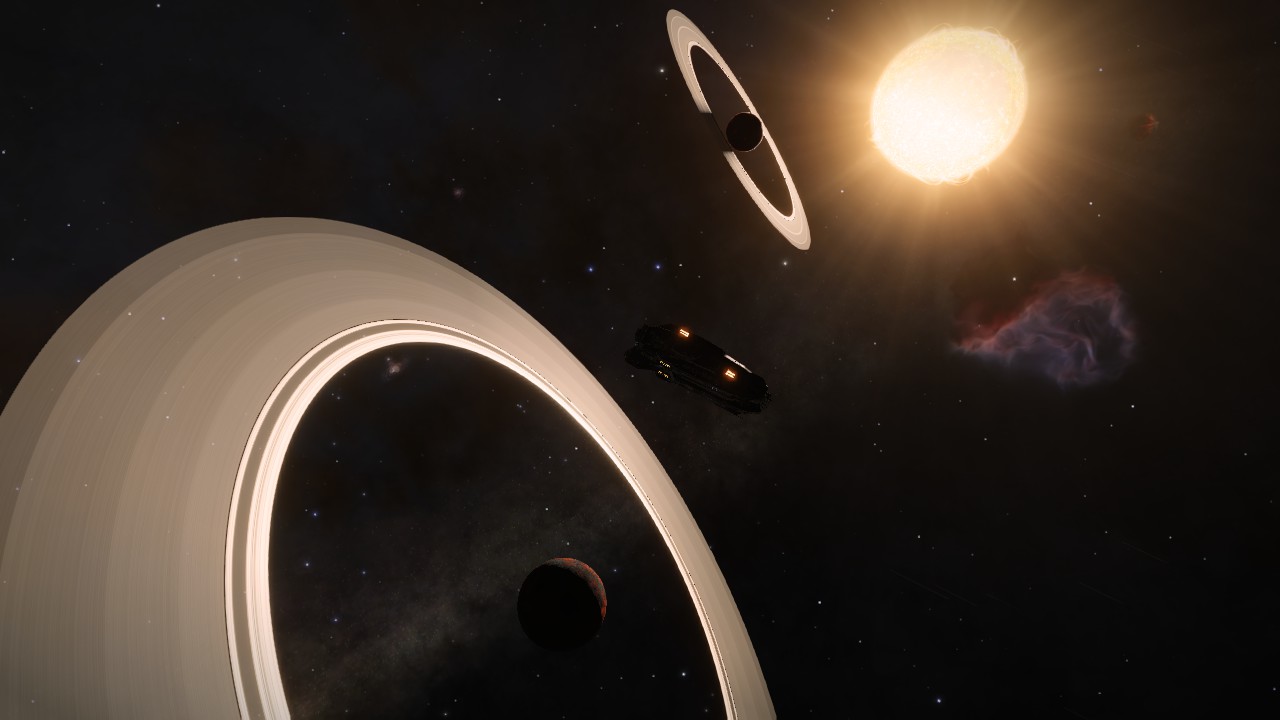 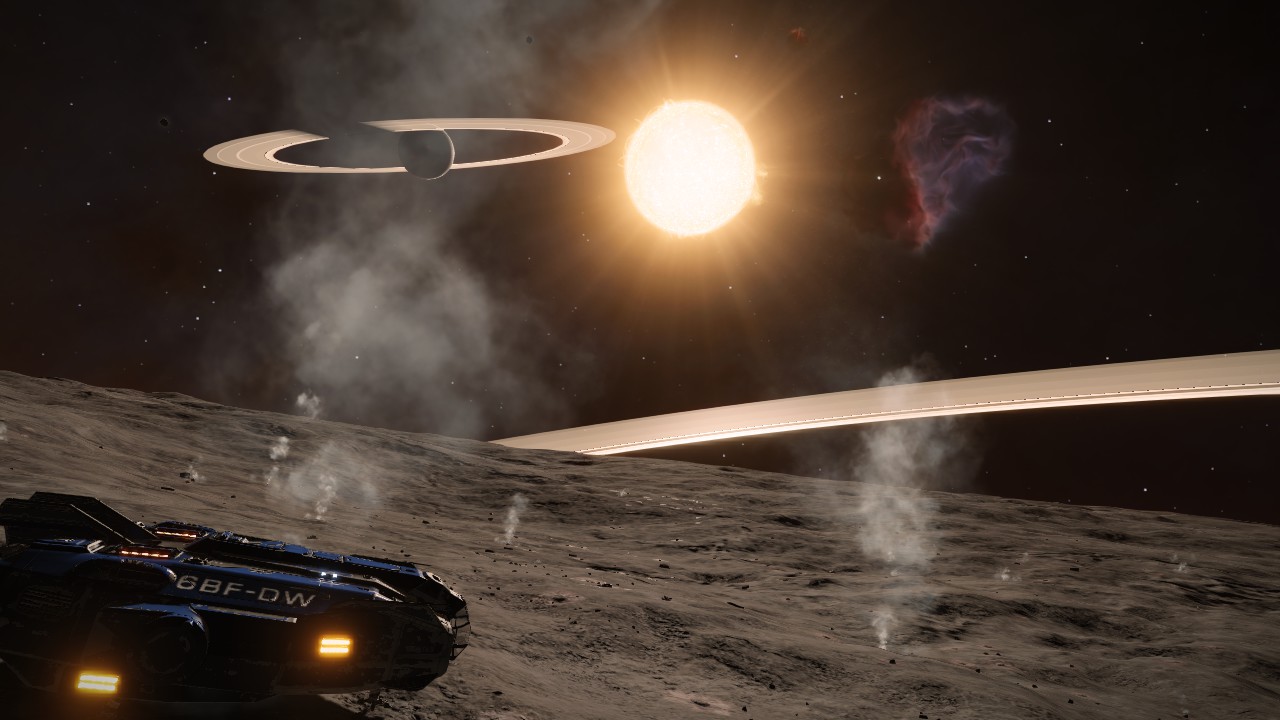