None, even by today's over-hyped standards of what counts as AI. It's all fairly simple at the micro-level, responding in various deterministic ways to player activity ... it's the emergent macro consequences of that which are complex.
Click to expand...

This one. People seem to assume the BGS is far more complicated than it actually is. Simple rules create complex scenarios though.

Very interesting read Ian, quite some detectve work involed, thanks much! - I wonder, who is CEO of the central bank in this BGS. LOL - So if I understood, a private faction, theoretically consisting of say 10.000 players, would still not be able to challange the NPC superpowers. Would that be roughly right?

Yes, I would have assumed neuronal networks and some AI aspects to be involved in the BSG part.

My mind wandered to far distant places... and I wondered, if an AI would control the game and would have total freedom of descision making, if and when at what stage it might take over the entire universe, for whatever reason.

MaxG10 said:
So if I understood, a private faction, theoretically consisting of say 10.000 players, would still not be able to challange the NPC superpowers. Would that be roughly right?
Click to expand...

It could, it would just take about as many centuries as it took in lore to establish those superpowers in the first place.

However, a coalition of 10,000 players manipulating a sufficient number of factions could dismantle an existing superpower in months - if unopposed and playing optimally - by transferring ownership of all its systems to other factions. It's occurring much more slowly due to opposition, lack of a single organisation, and so on ... but both the Federation and Empire have shrunk significantly since the start of the game as a result of this.


MaxG10 said:
May I ask, what do you mean when you refer to the bubble?
Click to expand...

The bubble is the region dense in inhabited systems approximately centred on Sol.

Opinions differ on exactly how big it is - certainly 200LY radius, but there are systems out to about 500LY radius where it's very hard to make a case for including one in "the bubble" but not the next one slightly further out. So people will all have slightly different definitions. In BGS terms, it's where almost all the action is.

The bubble got it's name during the first Alpha and Beta periods when players were restricted to a gradually increasing bubble of systems at each stage, starting with just a handful of systems. The rest of the galaxy was out there but couldn't be flown to.

Ian, from a psycho-sociological perspective, this is so very interesting to hear that Empire and Federation shrunk due to players activity.

I come to think, besides the mathematical and economical dynamics of course, this game is a feast for researchers in a variety of disciplines. Complex systems comes to mind, and I wonder, what level of computational power is assigned to maintain the BGS. It will not be that much I would guess, considering ticks and all.

I would love to learn what projections a brute force calculation would reveal on basis of the current data for the next 12 months.


Ian Doncaster said:
[1] For an ultra-picky side point, there are also four key systems in the bubble which cannot be expanded into or taken over, so the faction would need to omit those.
Click to expand...

Oh, Taboo zones, interesting, and that would be?

MaxG10 said:
Ian, from a psycho-sociological perspective, this is so very interesting to hear that Empire and Federation shrunk due to players activity.
Click to expand...


MaxG10 said:
Oh, Taboo zones, interesting, and that would be?
Click to expand...

The three superpower capitals - Sol, Achenar and Alioth - and Shinrarta Dehzra. They cannot be expanded into, and factions already there can't fight conflicts. The same applies to the Colonia and Ratraii systems, though a bubble-based faction wouldn't be able to reach those anyway.
(Factions in those systems can expand out of them, however)

Additionally, the other permit-locked systems are "more difficult" to expand into (a relatively recent change) - but may still be possible. Not enough testing has been done.

Detention centre systems are entirely exempt from BGS effects as their only faction is the detention centre itself, which is a non-influence faction. Despite having a population they also can't be expanded to.

Just a quick note, ( I am moving places, boxes, boxes and more boxes...) That is superb Information Ian. Thanks a lot! Have a peaceful season.

S
With the dropping of 3.3 shouldn't the title of this thread be changed to: PANIC

Thanks for the guide, quite helpful!

Could you add a >LIST< to the start page with every >LINK< ?

I will when I get to the point were I'm updating for the 3.3 changes

Jane Turner said:
I will when I get to the point were I'm updating for the 3.3 changes
Click to expand...

Brilliant, thank you very much for the time spent on this !

Can someone annotate this pic?

Thanks, that'd be great. 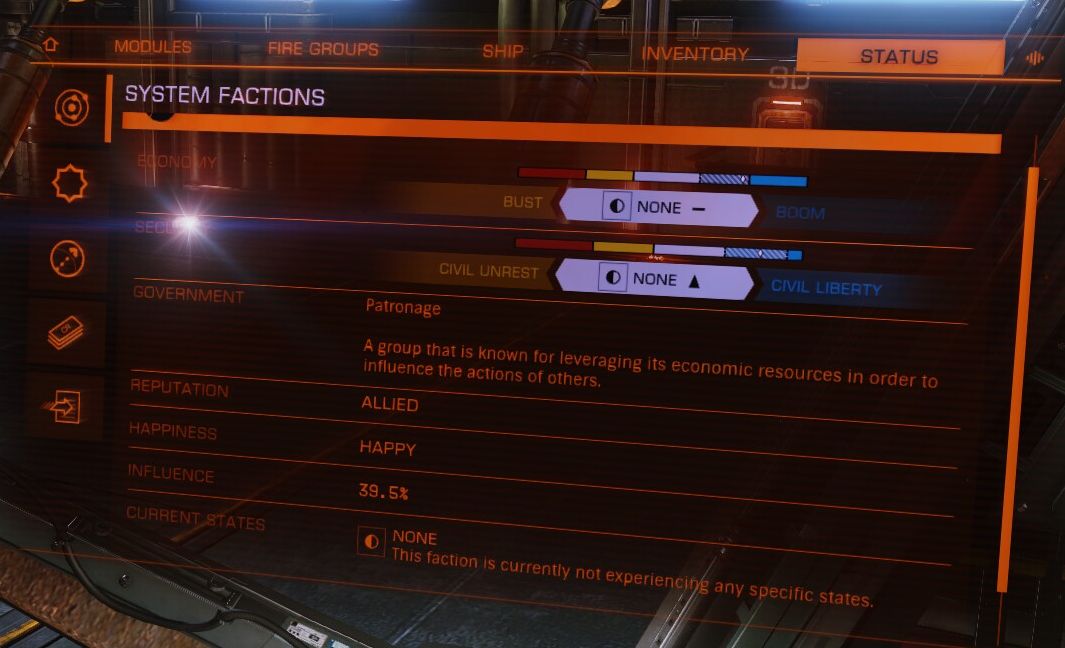 DNA-Decay said:
What is that hashed out area?
Click to expand...


DNA-Decay said:
What is that diamond in the hashed area?
Click to expand...


DNA-Decay said:
What does the circle with black and with halves indicate?
Click to expand...

The icon for the "None" state


DNA-Decay said:
What does the black UP arrow indicate after the NONE?
Click to expand...

Trend of diamond position (over an unknown time period) is positive


DNA-Decay said:
If there were other states pending where would they show up?
Click to expand...

In the "Pending States" row (scroll down below Current States)

DNA-Decay said:
What is that hashed out area?
Click to expand...

If I had to summarise that whole thread in my own words, the hatching acts a little like an S-R latch, but things get weird around the None state.

EDIT: S-R Latch in a nutshell... lets say you have a light which turns on when a certain level of darkness is reached, and turns off when it's light again... let's say that level is 0.5, where 0 is total darkness and 1 is daylight.

Because light levels are one of those things that can vary, your light might start flickering on and off because the light itself sends the light levels 0.5 again, then below when it turns off. An S-R Latch sets a different upper bound for the light to switch off again. So your initial state might be light is off at 0.6, and turns on when it drops below 0.5. But it won't turn off again until the light level reaches 0.7. Conversely, it won't turn on again til it drops below 0.5. It stops rapid switching between the two states.

If I had to summarise that whole thread in my own words, the hatching acts a little like an S-R latch, but things get weird around the None state.
...
Click to expand...

That would make sense I think, to stop flip-flopping between states. It would give a Pending state some 'momentum' to continue towards Active.

I'm a returning player. I'm sure I've missed a lot of BGS changes in almost a year. Could anyone possibly help me find the updated info? Thanks.

Yes, you really have missed a lot of changes!

The big differences are:
- states are per-system rather than global (except Expansion) and a faction can be in several states at once
- economic and security states are sliders rather than the traditional states
- conflict states are now always best of 7 days, and influence is fully locked for the factions during the conflict
- conflicts must now have something at stake
- the effectiveness of certain actions has been rebalanced
The implications of those changes are significant, of course.

Ian Doncaster said:
Yes, you really have missed a lot of changes!

The big differences are:
The implications of those changes are significant, of course.
Click to expand...