I've heard its being worked on. Is there any firm news other than rumors?

The DW team are back together and have been discussing a few early ideas on what another event could be about, but that's all.

There's no other news until Frontier reveal what the new era content update is about. Until then its all speculation with no guarantee that there'll be a DW3.

As long as its not Beagle Point again.

If FCs are interesting and indeed do have ranges of 500 LY, then i see potential there for a Distant Worlds based around reaching previously unreachable systems. Perhaps along the top, bottom or edges of the galaxy.

I got a PM from someone last month whose still on his way home from DW1 . He'd been tootling around the galaxy for 4 years and hasn't docked at a station since DW1's launch back in January 2016 !


I got a PM from someone last month whose still on his way home from DW1 . He'd been tootling around the galaxy for 4 years and hasn't docked at a station since DW1's launch back in January 2016 !
Click to expand...

That's some serious exploration devotion. Or they got lost on the way back. It's one of the two


I got a PM from someone last month whose still on his way home from DW1 . He'd been tootling around the galaxy for 4 years and hasn't docked at a station since DW1's launch back in January 2016 !
Click to expand...

You did a bit of that yourself due to that cracked canopy before DW1, iirc.

Just patched and took off from Beagle 2 a little bit ago. Think I'll take a leisurely jaunt down the Sagittarius-Carina Arm for the route home. 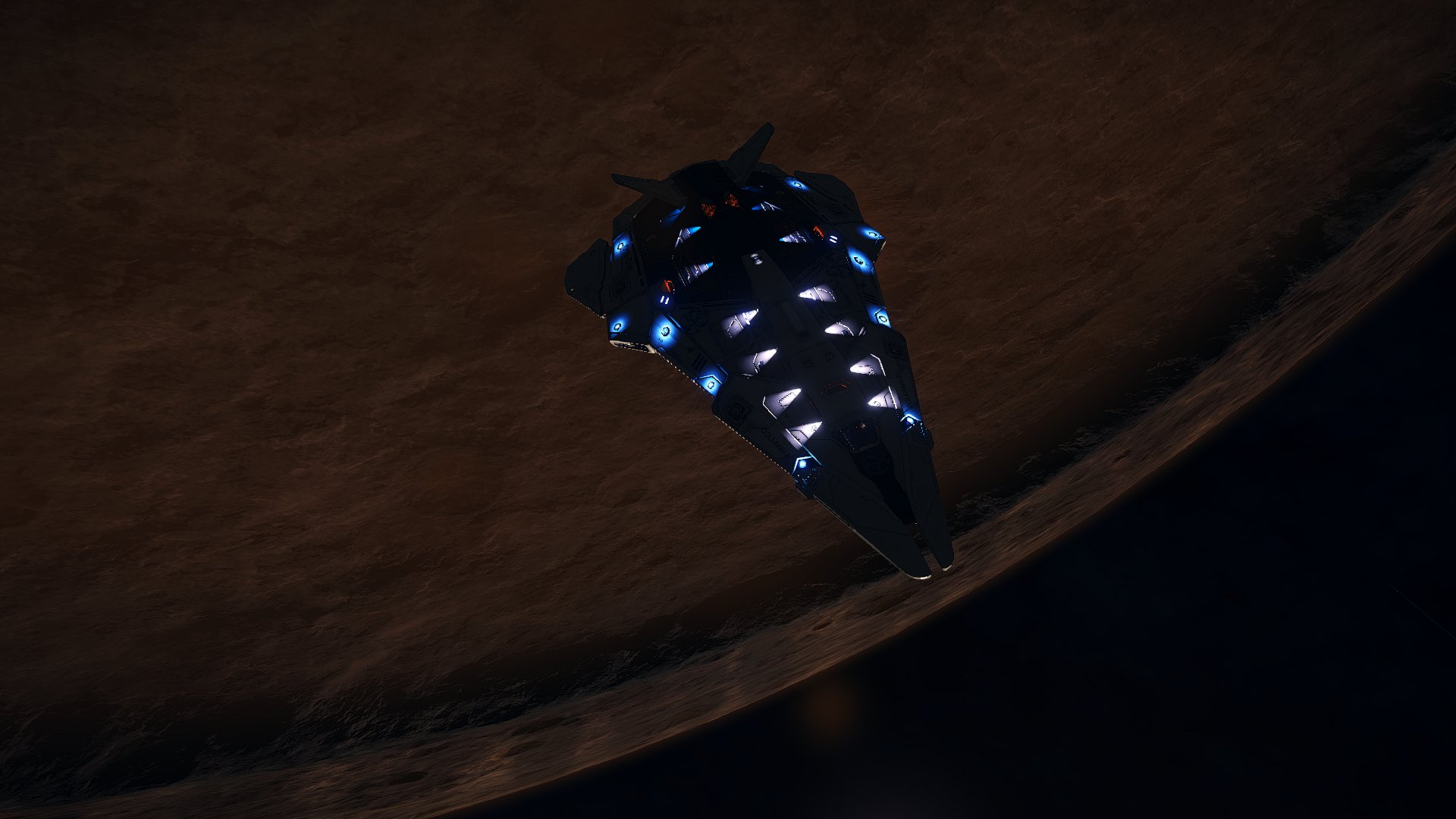 Hey, everyone!
New commander here, been playing for about 2 weeks now and counting

I've been skimming through events and I see people still doing Distant Worlds? I can't really tell if it's just joking around or a real thing.

Is it possible to participate in Distant Worlds now?
This is seriously possibly the best feature of the game, it's a shame you should do deep digging around to find it, after purchasing the game.

Welcome to Elite Arkendight. Distant Worlds 2 ended last year but there may still be some stragglers left out there on their way home. There may be a Distant Worlds 3 expedition too in the near future, but it will depend on what content comes to Elite in the next big update later this year.

If DW3 happens, we'll announce it on this sub forum, on twitter, and I'm sure Frontier may mention it too, when/if the time comes

In the meantime, yes you can still go follow the old DW1 and DW2 routes if you want to go and see the sights, but the official expedition is over so there won't be any support or rewards on offer now.

Hey, thanks for the reply!

I'm very much looking forward to continuation of these space voyages.
It's probably a good turn of events for me, since I can prepare for the upcoming content and be a fully-fledged member of the expedition by then.

How can a participant help in organizing the event?
Is it RP intensive?

Erimus gave you the DW2 update. If you’re interested in ongoing exploration and emergent gameplay projects, you should check out the Deep Space Support Array being organized by Qohen Leth.

I am currently recruiting for one of the DSSA fleet carrier expeditions. Be happy to chat with you about details, if you’d like to learn more. Here is the recruiting thread:

It's time to disembark, Commander. We are delighted to share with you a glimpse of the Next Era - Elite Dangerous: Odyssey. Explore distant worlds on foot, expand the frontier of known space and leave your mark on the galaxy as you become the first person in history to explore lands...

Rock-Hermit said:
I've heard its being worked on. Is there any firm news other than rumors?
Click to expand...

Yes. Next year. After we get the space legs, we're all going to walk to BP.

I'd recommend you get into FleetComm Discord. That's where the conversations and rumors are happening. o7

I was asked to clarify whether (and when) there will be another Distant Worlds expedition, and where the team stand in regards to the Odyssey content update.

It is currently postponed indefinitely, more accurately, the planning of it is.


Distant Worlds events are a large community effort, they take a lot of time to put together, and its a big sacrifice of peoples spare time once they commit to the project. For example; DW1 took 5 months planning, whereas DW2 took twice that. So for another Distant Worlds event to occur, the majority of the team who dedicated months of their spare time to the previous two events need to be as active and passionate about the game today, as they were back when they worked on DW1 & DW2.

There are around 40 people in the Distant Worlds organisation team, many of them were there right at the beginning for the first one (DW1), back in 2016, and many more who joined to help put DW2 together three years later, and new people who joined the team as recently as 2020. The team is made up of players that have experience across a wide variety of content creation for Elite Dangerous. These include community initiatives like EDSM, the DSSA, Hull Seals, Rock Rats, CoR, the Galactic Mapping Project, FleetComm, ED Streamers, Fuel Rats, Distant Radio, and even an official Elite Dangerous author, as well as individual organisers from some large non-DW related expeditions too.

They have some great ideas for DW3 already written up that would pack the expedition full of projects and tasks for players to undertake during the trip, expanding DW3 to more playstyles by utilising the new content, and building upon the legacy of the other expeditions, as well as a whole DW3/DSSA narrative to be written by Drew Wagar. Importantly, none of these ideas require any specific help from Frontier since they've been written purely with current gameplay and game assets in mind, the exception being the opportunity to have Frontier oversee any merchandising people do for DW3, so proceeds generated go solely to a charity Fdev sponsors. This latter point is an important one for this team, its something that was discussed at length after DW2, and we feel that if a DW3 event got even half the publicity and participation as the previous one did, its possible it could do a lot of good outside of Elite, as well as bringing a lot of memorable times and creativity to the people who take part in it.

The original plan was to begin the early organisational stages of DW3 in the wake of the Odyssey release - once everyone has had a chance to see what the update was bringing and how we could get the best out that content - and set a launch date sometime after the console release.

However, the initial release of Odyssey has come with many problems. It needs a lot of updates and optimizations undertaken before we can commit time to putting the plans for DW3 in motion. There's little point trying to plan anything on the scale of DW3 until we know that certain aspects of the game are 'finished' (planetary tech being one example), and crucially have confidence in knowing that the game code is finally optimized and stable.

It may also be a case that Elite Dangerous can no longer accommodate such a large scale event anymore if there have been more fundamental changes in the net-code. If you look at DW1 and Horizons for example, back then it was possible to create relatively stable instances that had in excess of 100 players at a time, whereas by the time DW2 and 'Beyond' came around this had been significantly reduced (the launch event itself crashed the entire server network due to how many players were taking part!). We don't want a repeat of that on DW3.

Therefore with so many unknown factors to deal with at the moment, most of the DW organisation team are on a prolonged hiatus from the game. So for the time being, and until everyone knows what state the game will be in after the console release, along with seeing who in the team are still committed to Elite Dangerous at that time, the overwhelming consensus within the team is to put the planning of it on indefinite hold. As mentioned in the spoiler section above, organising these events requires a big time commitment from people when the ball finally gets rolling, but there is too much uncertainty with Odyssey this year to warrant it, coupled with low confidence in whether Frontier will ever address some of the major issues we've all witnessed with the initial EDO release, and especially when those issues are likely to be resolved.

If and when that changes, the idea of organising the next Distant Worlds expedition will be revisited, possibly even with new people spearheading it.

In the mean time there are always new expeditions popping up in Elite. Check the expeditions page on EDSM to see whose doing what. Some of those are expeditions that individual members of the DW team are organizing themselves, so if there isn't a DW3 for the foreseeable future, there will always be other events to take part in. We hope people will support them as much as they supported the Distant Worlds events of the past.

If you want to keep tabs on 'Distant Worlds', or chat to org team members, you can do so here - Distant Worlds Organisers server: Discord Link

Cool. I'd definitely be interested if this if it takes place.

Frontier have revealed its only tenuous atmospheres, and they be like different coloured sky hues, not actual atmospheres with all the things we have come to imagine. sigh- frontier - sigh
So I guess dw3 is a no go for now?

Rock-Hermit said:
So I guess dw3 is a no go for now?
Click to expand...

It's a "we're waiting to see of Odyssey brings any exploration content" for now.

Would be great to be part of a DW3 expediton.