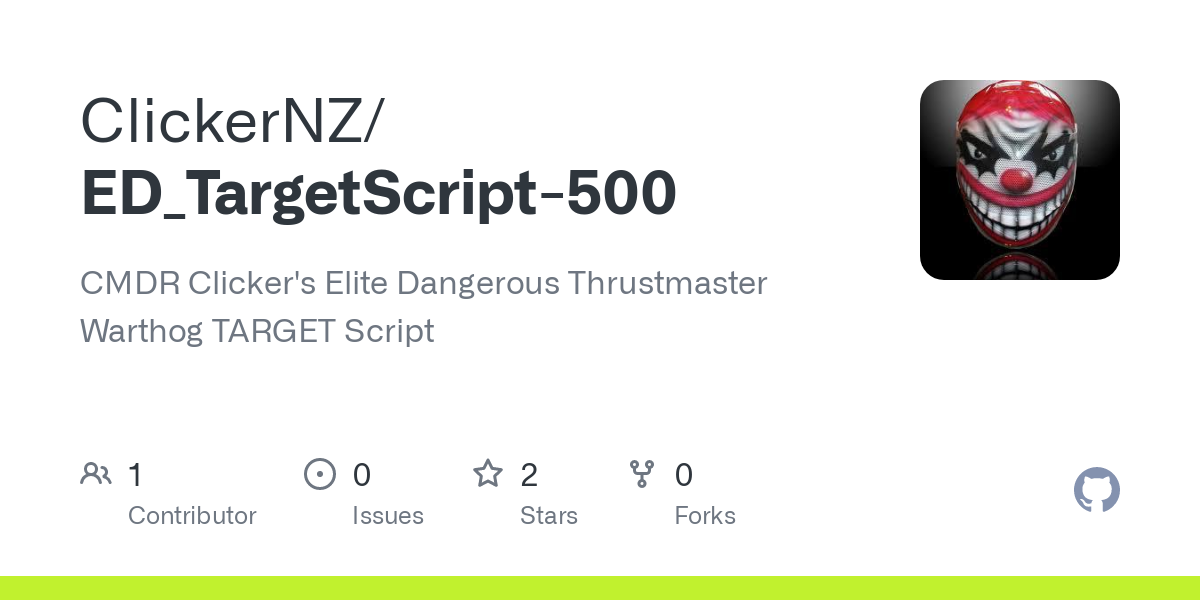 Contribute to ClickerNZ/ED_TargetScript-500 development by creating an account on GitHub.

After much deliberation and gnashing of teeth, I have decided to share my own personal Thrustmaster Warthog TARGET Script.

I originally used Aussiedroid’s script (v3.1.0.5) as the base...2 years ago.
However my philosophy is fundamentally different in so far as I only included the functionality I wanted to use and therefore stripped out everything else.

I then expanded some features, added a lot more of my own and rewrote the script from the ground up several times as I learnt more about how TARGET script worked…and now, two years later, it is...what it is!
I have now added in some usability features to suit other players, some of whom are perhaps starting out and just want a BASIC profile with no bells and whistles.

The single biggest difference between my script and all the others I’ve seen and borrowed ideas from is that mine continuously reads the status.json file in the journal folder, then uses comprehensive state tracking for most of the features and functions in the FULL profile.

Features of my script include; (updated)
I have included the User Reference Guide (PDF) in the package to describe in simple terms, how to make the most of using the script.

The script itself is intended to provide immersion within the game but has an absolute TONNE of commentary if you are so inclined to look under the hood.
In this regard, the script serves as an excellent reference for those who wish to learn TARGET script, or extend their knowledge beyond the basic “Fast Script Basics User Manual” supplied by Thrustmaster.

I have endeavored to write the script such that the functions themselves could be ported to other Thrustmaster TARGET compatible HOTAS controllers and my aim in the future will be to create a T16000 version as well...watch this space!

This script is a labour of love and continuous work in progress for me and I am constantly changing, improving and adding stuff all the time.

I hope you enjoy this script and that it suits your requirements and playstyle.

If you like what you see, please consider spotting me the price of a coffee via Patreon...no pressure!
https://www.patreon.com/user?u=36436459

The script can be found on my Github page at 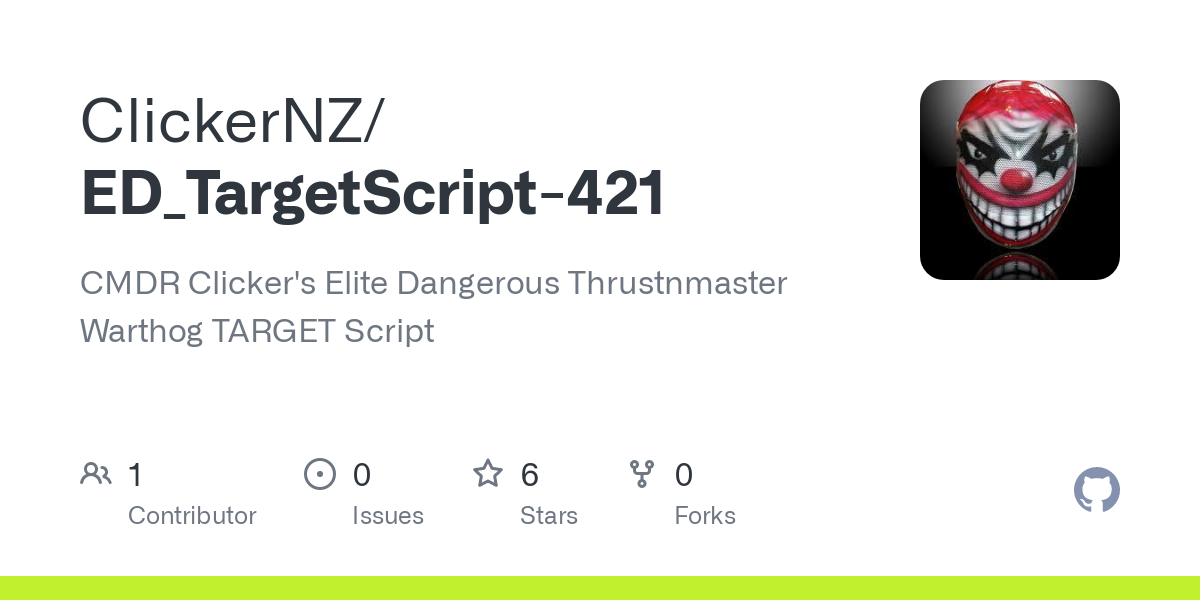 I look forward to any feedback and suggestions you may have for improvement.

This is a fantastic bit of script Clicker! You have really developed this a long way from the old v3.x version of my script. Its clear you have put a lot of time & thought into this. Things like the flag tracking states and the T2S feature are really next level too.

Awesome feedback from 'the master'!

My friend started playing, so I need to dust off my scripts. I'll be stealing liberally from your code.

I love the .json function. I wanted to do that since ED created it, but I quit playing. Now someone did all the work!

I would imagine that some of my code originated from you @Dar|{cyde , and if not, then at least some of my learning and perhaps some of my ideas came from your script for sure!

Steal whatever you fancy....'tis the pirate way!
And if you find better or more efficient ways to do stuff (tm), and it probably won't be hard, please share!

Dar|{cyde said:
My friend started playing, so I need to dust off my scripts. I'll be stealing liberally from your code.

I love the .json function. I wanted to do that since ED created it, but I quit playing. Now someone did all the work!
Click to expand...

Clicker said:
I would imagine that some of my code originated from you @Dar|{cyde , and if not, then at least some of my learning and perhaps some of my ideas came from your script for sure!

Steal whatever you fancy....'tis the pirate way!
And if you find better or more efficient ways to do stuff (tm), and it probably won't be hard, please share!

It's probably been about 4 years, but feel like things have come full circle

I've only been playing with TARGET Script for 2 years...but it seems way longer.
I have learned SO much.

I love playing Elite Dangerous even though it has become harder to be motivated to actually play the game...but I do not seem to have the same problem tinkering with my script or trying to help people who ask TARGET related questions.

Clicker, can we talk about how to get the (#&(%$& TARGET scripting to actually work with my brand spanking new Warthog HOTAS? I'd love some help...

I've run into the dreaded stopped scripts problem that appears to be relatively common. No script I run can complete, as I get the "unable to assign" TARGET error. Several of the forum posts I've seen have recommended doing regedit changes, keeping the HOTAS plugs in USB 2.0 sockets, and being strict with the order of driver installs. All of which I've done, but I'm still unable to use a TARGET script. Any good ideas?

Can you post a screen shot of the TARGET Console showing the message you describe please?

....so I don't know what magic joojoo you just employed, but all of a sudden the script just advanced.

Maybe a slow driver load...let me know how you get on with the rest of it.

"ClearAllChatBox" macro now set for non-squadron users.
Extra iteration for Squadron Chatbox commented out...users who are IN a squadron, should un-comment the lines to re-enable clearing all 3 chat boxes.

Update to cater for TARGET v3.0.20.826
Minor tweak to cater for when we'd occasionally get a "Read Error" when reading status.json whilst it was locked for writing by the game.
Last edited: Mar 12, 2021

G
Ill give this a try but so far im not having much fun with my Warthog and these scripts.

My script is similar to the one @Aussiedroid offers and requires much the same installation.

Have you already mastered the game using the game's built in bindings for the WARTHOG?

If not, maybe start there, then come back and try the script later.
Otherwise you have 2 separate and steep learning curves...one for the game itself and one for the controller scripts

Can you let me know what your ideal outcome is/was when you bought the WARTHOG and what outcomes are you after with a script?

Hopefully you know you don't actually NEED a script to use the HOTAS in ED.
You can just plug it in, run the game, get into the OPTIONS, CONTROLLER section and go through whatever bindings suit you.
This will take you perhaps 30 minutes to an hour depending on how familiar you are with the bindings in game.

The only problem with this may be that if you do wish to use a script like mine or Aussiedroid's in future, you will need to use our custom bindings file and relearn which switches do what. This is entirely due to TARGET script causing Windows to replace both the Joystick and Throttle controller with a combined controller.
So, essentially Elite Dangerous sees a totally different controller device and therefore uses a different bindings profile

To assist in learning what switches do what, when you run the script in the TARGET GUI with Elite Dangerous NOT running, simply press each switch/button and the colsole readout will print what it's doing.
If you have installed the TextToSpeech app as described in the installation instructions, you'll also (hopefully) hear your default Windows Voice say what the switch does as well.

Either way, I'm happy to try to help you get the most out of your WARTHOG...with, or without my script.

Thanks for the info provided.

Issue that ive run into and you will probs have seen it on Aussiedroids post was when i select my Warthog in the controls a lot of the keybinds are switched off and so is my mouse and ive not found anywhere how to turn it back on. I dont know my way around the keybinds at all as my old Hotas fligh i just plugged it in and all the keys and mouse were all working perfect to what i like but on the warthog there are horrid and most dont even work but because of all the keys ED uses i just cant be botherd sitting for hrs searching for keys when really it should have been sorted from the time i plugged it in same as my old Hotas.
You must log in or register to reply here.
Share:
Facebook Twitter Reddit WhatsApp Email Share Link
Top Bottom