Building a 3D printed HOTAS based on the in-game cockpit

M
Spent a few days designing circuit boards. Ordered some (professionally made) ones from China and had a go at etching my own..

N
You appear to be a man of many talents. Is it possible to 3D print as circuit board?

nigeljk said:
You appear to be a man of many talents. Is it possible to 3D print as circuit board?
Click to expand...

I think some people have made progress with conductive filament but no this was just the toner-transfer method where you print the design off using a laser printer on glossy paper, then use a laminator to “melt” the toner onto the circuit board then etch it in ferric chloride.
As you can see it’s actually really effective. The only hard part is drilling the holes and making a makeshift solder resist as I didn’t buy the expensive UV stuff.

nigeljk said:
You appear to be a man of many talents. Is it possible to 3D print as circuit board?
Click to expand...

For home users not. Industrial maybe - but then, other setups that will yield similar results are (still) cheaper and easier to use.

You get multiple problems here:
Kind-of conductive filaments exist, as do conductive glues - but their conductivity is still orders of magnitude away from copper, so your path loses are considerable. In some cases, this will be tolerable - in others, not so much.

Transfer etching like MC showed above is reasonably simple (if you discount the problem of getting rid of the hazardous waste). Photoetching about the same. If you have a sufficiently accurate NC router, isolation routing is also a possibility for small runs of single and double sided boards.

All of that though, has the problem of dimensions - for one-shot hobby projects not a big issue, you usually won't be handling any small pitch components in any case. But with some parts, you'll have to live with fine pitch casings where the pins will have a distance of 0.25 mm or even less - or you want/need to route a path between two adjacent pads at 0.4 mm distance...

Great!
I always wanted to have the ingame controller on my desk.

Keep on with your work, This will be really cool!

Ski'Thor said:
Great!
I always wanted to have the ingame controller on my desk.

Keep on with your work, This will be really cool!
Click to expand...

Same. Progress slowed a bit cos the physical casing is done and ready to go mostly and the code isn’t too hard but making sure the electronics are wired up is trickier. I was just going to hand-wire most of it but the LEDs in particular need to be surface mounted and the common grounds etc meant if I didn’t make some PCBs it was going to become a mess.

I did try perfboard but that’s even harder to solder lines on than just making custom PCBs.
I’ve had to switch my HAT design slightly as the LED mounting was perfect but getting them soldered in the tiny space with the plastic parts melting everywhere is impossible. As a result I’m going to mount the LEDs for the hat switches next to the surface mount 5-way switch. This means the glow won’t be quite as bright but I’m hoping to use light channels to do my best.

M
A test board cos some of the traces didn’t like my woeful soldering but we have light. The two adressable LEDs for the top of the joystick to be precise.

I am pretty experienced at soldering as I build my own guitars etc. Rather than having plastic melting all over it should be possible to use thin metal plate which could be slotted or superglued into place after being soldered and cooled off?. Your printed parts could be adjusted to fit. I myself buy rolls of 1.5" inch copper or even heavy duty kitchen foil when lining the cavities of guitars in order to screen them. These rolls usually have glue applied on one side and just need cut to size with a scissors.
Last edited: Aug 28, 2021

Waiting on some circuit boards so no buttons but the stick is now a working stick!
Source: https://youtu.be/gMsHqCTZoSQ

M
Another video here showing the redesigned Z twist.
I’m also adding all the files for this to a GitHub so people can print their own. Still a work in progress but I know people were asking.
Source: https://youtu.be/gDJXw_cu-3k 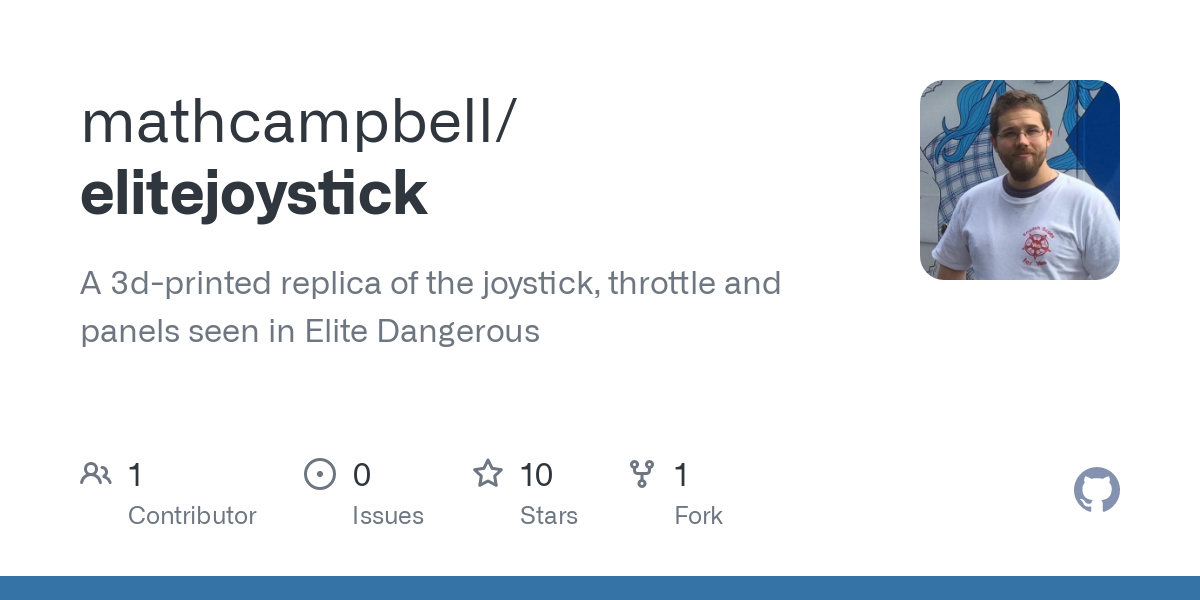 GitHub - mathcampbell/elitejoystick: A 3d-printed replica of the joystick, throttle and panels seen in Elite Dangerous

M
Not a ton of updates recently as I've had to redesign a few parts and reprint some in harder PETG (PLA is fine for some things but screws strip it far too easily)...eventually I'd like to print it in nylon carbon-fibre but that depends on budget and El Wife permitting me to upgrade printer...

Still waiting on the next circuitboard from China..having second thoughts about the board that I'm waiting for - its the board from the top of teh stick that will have the switches and LEDs (the vertical ones, not the HAT and single switch on the flat part of the top piece).
Main issue is that the LEDs which I had wanted mounted directly atop the switches so they can shine straight through the clear button plastic are going to instead be placed slightly to the side..which means the light won't be as bright.

Only way I can see around this is if I buy the same LED's with a breakoutboard attached, and then integrate that board into the switch/button assembly...trouble is a) that means redeisnging again, b) it's bulkier, needing more space in an already crowded spot and c) I'd have to rebuy LEDs (not the biggest issue mind you, they're not too expensive)..

I think I shall wait for the PCBs to arrive from China, then solder one up with the current design and see how it looks, and if it's not bright enough think again.

Anyway, here's the latest video I did last weekend showing the stick with working triggers in-game as I fail pathetically to attack NPCs..

M
Sorry for a lack of updates. Had a bout of some viral thing, and after that been rebuilding my printer to allow me to print higher-temp materials, meaning the next revision of the stick will be a bit firmer.
The circuitboards for the top of the stick have finally arrived tho so my next update will be a finished, final version of the top switches etc...

M
Been over a month with no updates, sorry Cmdrs, had to take a slight detour in casting some silver jewellery and possibly remaking some of the joystick pieces in cast aluminium...still hard at work on this bad boy though, I've redesigned the top and gotten the circuitboards built so images coming in soon once I've re-printed the entire damned stick (which is about 2 days of printing!)

M
Just found this thread by chance. Good luck with this project! Very cool stuff so far and I hope you're able to bring it to completion!

M
It’s getting there! The buttons are all standins but as you can see, I have a working HAT switch that glows!!