Anyone got an Alt to scan the new station in Stuemeae FG-Y d7561 ?

The station will have Outfitting (like Omega), Repair/Restock, Commodities but no shipyard.

I hope there's beer sold. I want to take some with me. I forgot to check at Omega...

Seriously. That station needs to stockpile booze and food cartridges. Long distance travellers are likely to need large quantities of both.

If this is confirmed, regarding Shipyards*, I’m glad I stripped the Asp I bought at Omega of all the mining goodies. Although I may need to buy a new PP and PD there if I can.

Orvidius said:
Seriously. That station needs to stockpile booze and food cartridges. Long distance travellers are likely to need large quantities of both.
Click to expand...

I only brought one tonne of beer, and now it's all used up. It will be several thirsty weeks to Stuemeae FG-Y d7561

Using precision guesstimation on the galmap, I have decided our station is less than 4LYs from SAG A*.

C
Surely the absolutely most vital facility it needs to have is cartographics? If it lacks the ability for pilots to hand in exploration updates then that would just be an incredible troll of the community.

There's almost no point in it existing unless it can become the new central hub of long distance exploration data.

So far I haven't seen a deep space outpost that didn't have UC, so that would be a first. Definitely a huge oversight if that's missing!

Orvidius said:
So far I haven't seen a deep space outpost that didn't have UC, so that would be a first. Definitely a huge oversight if that's missing!
Click to expand...

There are a couple of stations in Colonia that don't. Not a big deal now but it meant for the first six months or so there really wasn't a lot of choice for places to sell there if you wouldn't fit on a medium pad.

As for this one, it will presumably depend on what tier the second CG reaches...

Orvidius said:
So far I haven't seen a deep space outpost that didn't have UC, so that would be a first. Definitely a huge oversight if that's missing!
Click to expand...

It will, but we'll have to work for it. UC will probably be one of the tiers we'll have to reach in the second CG. AFAIK it will not be there in the stock-station.

Well I don't know about everyone else, but I would like to see a brand new station with brand new landing pads and fresh paint. not a station that looks like it was bought on the cheap from a second hand junk yard, that looks like it's falling apart before we even get there. I mean some imperial stations look so clean and new compared to others, and I think it would make a nice change to see what a brand new station that has never been used looks like, instead of the same old rehashed second hand looking shabby stations we actually get from CG's.

I didn't know there is more community work planned. Is that confirmed? And what options will there be - as guard duties are mostly out of the question as there are no NPCs around (except the Beluga paradise at SAGA beacon)?

Ian Doncaster said:
There are a couple of stations in Colonia that don't.
Click to expand...

I don't really think of those as "deep space" stations, since it's more of a mini-bubble. All of the deep space asteroid bases, and the Colonia-highway bases + stations all have UC. I've sold data to all of them.

D
Could anyone confirm if a bare-bone station is already there?

I don't think it'll appear until the week before the CG starts, if memory serves.

At a guess it will appear this Thursday morning GMT, to coincide with WP7 announcement on the sunday after.

According to what we've been told it will appear 'several days' before the CG starts. Perhaps the time will be enough to have non-mining-gear transferred to the new station (like a class 8 distributor and 256-ton-cargo racks).

I love the idea that it will be constructed in real time, and there'll be a skeletal structure there today.

But I'm sure it'll just be switched on and appear instantly on a Thursday morning.

However, I'm not too far away, I'll have a look when I get there. Maybe a couple of days' time.

C
I travelled to the system today. Be careful - it's a very close binary pair!

Two landable bodies, and a secondary star nearby orbited by a fun selection of four worlds (including a Water and Earthlike).

Sag A* is definitely visible in the sky, along with all the usual landmarks. The black hole appears as a bright smudge. There are closer systems to Sag A* though, where the smudge is even bigger.

No sign of any station construction site so far.

casbyness said:
I travelled to the system today. Be careful - it's a very close binary pair!
Click to expand... 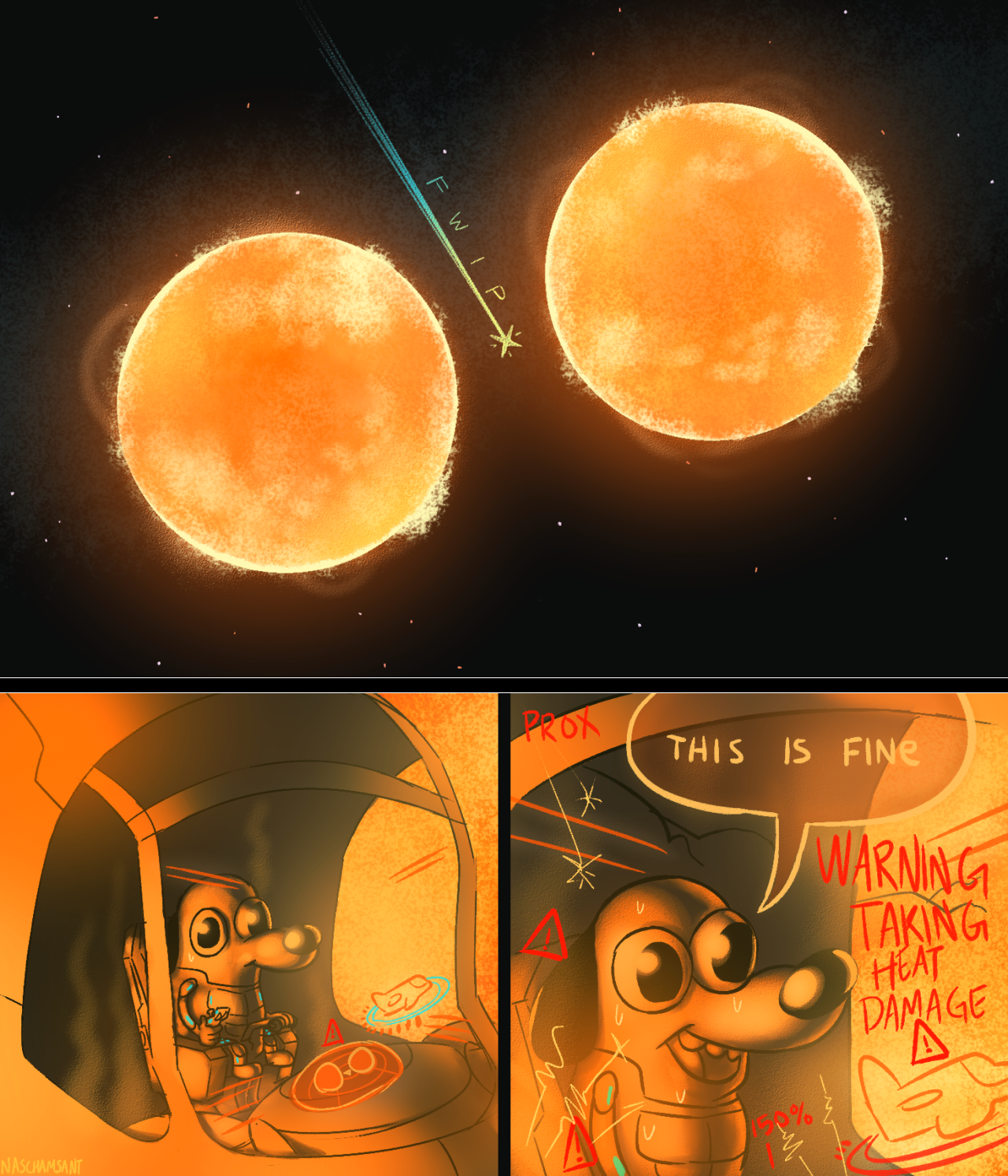